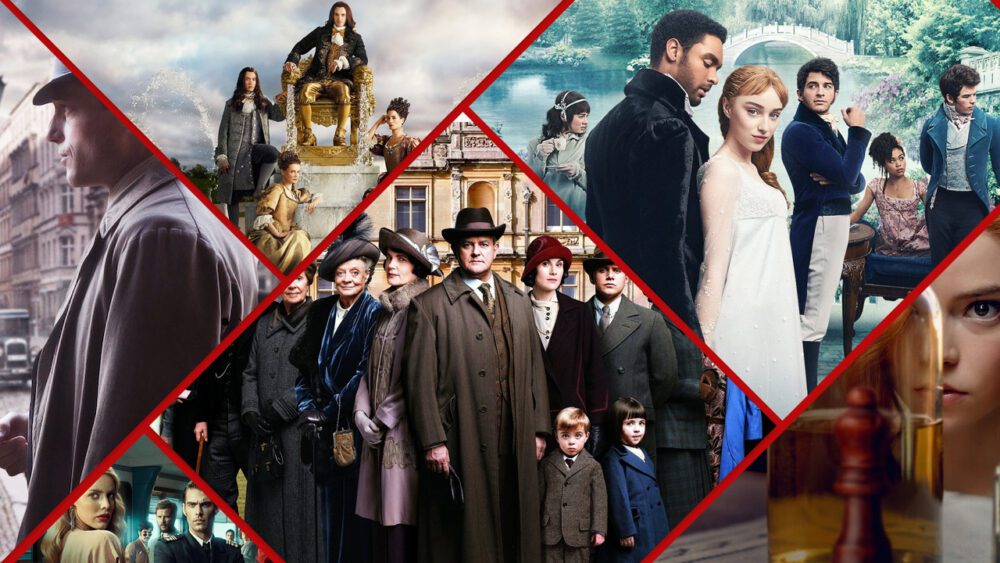 Netflix is currently host to some superb period drama TV shows from across the globe. Below, we’ll take you through our absolute favorite period dramas on Netflix whether that be English language series or some of the best international period dramas currently available.

For even more period drama lists spanning multiple streaming services, our friends at Willow and Thatch is the go-to resource for the genre.

Note: this list should mostly cover global releases but we’ve marked titles where they’re only available in limited regions.

Perhaps the most quintessential period drama series of the past decade or two is Downton Abbey, the British series which aired on ITV in the UK and PBS in the US.

The series takes place early on in the 1900s that follows an aristocratic family and the drama within. It tracks huge events in history such as the Spanish pandemic, World War 1 and the sinking of the Titanic.

The show dropped on Netflix around the world throughout 2021 and instantly saw its popularity pop. Some regions are also currently streaming the follow-up movie that was released in 2019 too.

Netflix’s award darling, The Crown, is perhaps one of the most lavish period drama productions in history.

The series spans decades taking you through the reign of the current monarch of the United Kingdom, Queen Elizabeth II.

The Crown is currently about to have its third wave of cast changes as we enter another new era for Queen Elizabeth. It’s renewed for season 5 which is due out in 2022 and a sixth and final season likely due to release in 2023.

Sticking with covering what those strange Brits got up to in the 20th, we move on to The English Game which covers how the modern-day game of football came to be.

While the subject matter is perhaps limiting, the costumes and writing certainly keep you engrossed even if you’re not a football superfan.

The series comes from Julian Fellowes who is behind Downton Abbey which we featured a little earlier.

There could be an argument for including this period drama in the international section given it’s a huge multi-lingual show which aired in multiple countries around the globe.

Set back in 1667, the series covers what happened when the French nobility (the higher class) began to rebel against the reigning monarchy. While the series wasn’t able to maintain its quality throughout (season 3 dropped off considerably) it’s still a charming watch.

This Regency-era period drama currently carries the label of being the most-watched series on Netflix within the first 28 days of release and follows the aristocratic Bridgerton family.

Although it weaves in and out of real-world events and contains real-world figures, the series exists in an “alternate history”.

The series is based on the book by Julia Quinn and adapted to Netflix by Chris Van Dusen and Shonda Rhimes.

Season 2 is on the way with spin-offs and more already confirmed.

This period drama originally aired on The CW and seeks to tell the rise of Mary the Queen of Scots.

It unfortunately has some of the other flaws exhibited by shows on The CW but given the episode count and the fact it still gets good reviews on IMDb, this is definitely one to try at the very least.

Reign isn’t going to be on Netflix forever. In fact, by our calculations, you only have until September 2022 to watch.

Wrapping up our list of English-language period drama series is one of Netflix’s most decorated limited series in its history.

Starring Anna Taylor-Joy, we follow a young girl’s journey into the world of competitive chess. It’s superbly produced and ranks at the top of our list of the best limited series on Netflix.

Among the many Spanish period dramas to have hit Netflix over the years is High Seas, a mystery thriller set on a luxury ocean liner where a series of deaths occur. It’s set in the late 1940s and has been enjoyed around the globe.

A fourth season was planned but canceled at Netflix but that won’t affect your ability to complete and enjoy the series as it ends with a strong enough conclusion.

Not only is Babylon Berlin a great period drama, but it’s also perhaps one of the most underrated international titles on Netflix right now.

Set in Germany during the Weimar Republic in the late 1920s, this series follows a police inspector on assignment in Cologne.

The series is set to premiere its fourth season sometime in 2022.