Mike Myers returned to his roots in playing multiple characters in his new Netflix series The Pentaverate which was released on May 5th. After a week on the platform, the show has failed to make a splash suggesting a season 2 isn’t on the cards but as it turns out it was always the plan for the show to be a limited series despite others speculating otherwise.

6 episodes of the new comedy series arrived on May 5th which saw a Canadian journalist get in over his neck while investigating a mysterious conspiracy group known as The Pentaverate which shares similarities to groups like The Illuminati.

Why The Pentaverate won’t return for a season 2

The Pentaverate won’t be returning to Netflix for a season 2 because it was designed and produced as a limited series. That’s not to say if the show was a breakout success more couldn’t be done but in this case, it wasn’t the plan.

If we look back at all of Netflix’s promotion for the show (including press releases to the trades) we can see that they all refer to the show as a limited series at least early in its development. Deadline in June 2021 explicitly called the show a “half-hour comedy limited series”. It’s worth noting that subsequent articles didn’t mention the fact it’s a limited series.

Most of the confusion seems to be around how Netflix labels the show as it does indeed label it as “season 1”, as opposed to “limited series” as most other mini-series do on the service. DigitalSpy also seemed to think that “there are at least plans for the story to continue” but that simply isn’t the case.

Netflix in recent months has been referring to some of their limited series as “event” titles and that seemed to be the case here. The trailer for the series referred to the release as a “comedy series event”. 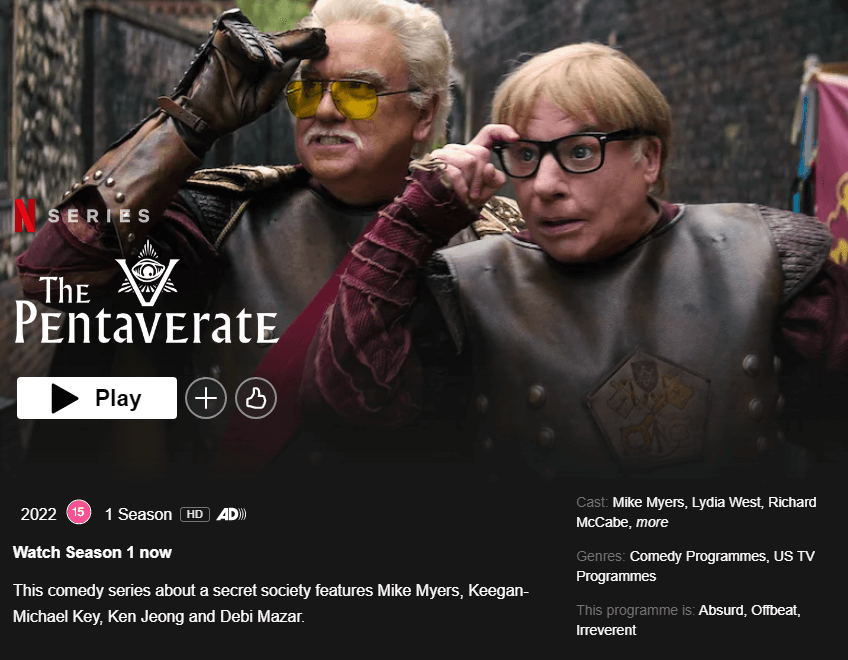 Season 1 label on The Pentaverate

Of course, the show does wrap up nicely anyway meaning there’s not much need for a season 2.

By the end of season 1, our hero Ken Scarborough has taken down The Pentaverate which has now been renamed The Septaverate. They’ve managed to make major changes with the significant change being there are now 7 members instead of 5.

How well is The Pentaverate performing on Netflix?

Sadly, the show doesn’t look to have performed very well on Netflix anyway.

It notably was absent in the global top 10 list released by Netflix for performance between May 2nd and May 8th meaning it scored below 10.85 million hours viewed. That fact was picked up by numerous trades with one calling it a “bomb”.

Raw top 10 figures suggest the show failed to make any inroads around the world either. FlixPatrol reports the show was only in the US and UK TV top 10s for a single day before dropping out. The show performed best in Canada appearing in the TV top 10s for 8 days and the overall top 10 for 3 days.

On the reviews side, things are a bit more mixed.

Critic scores for the series are abysmal. It currently holds a 21% on RottenTomatoes but audience scores so far have fared much better. It holds a 61% audience score on RT and that’s mirrored on IMDb with a 6.1/10. Speaking of IMDb, the show peaked at #46 on the IMDb MovieMeter following its release.

Just finished watching the Pentaverate on @netflix and I loved it.
Hilarious and fun with just a dash of truth when it comes to ridiculous conspiracy theories. This show was just fine as a one off, but personally I would love a season 2😁 ⭐️⭐️⭐️⭐️⭐️#ThePentaverate #mikemyers pic.twitter.com/xeIeV38iwM

Would you have liked to have seen more Mike Myers tomfoolery on Netflix? Would you like to see him tackle another project for the streamer? Let us know in the comments below.

‘Stranger Things’: Eleven Is Stuck in a California Nightmare (RECAP)
‘Saturday Night Live’: Will Pete Davidson Leave After Season 47?
The Time Traveler’s Wife – Episode 1.03 – Episode Three – Promo
POLL : What did you think of NCIS: Los Angeles – Come Together?
Josh Duggar of ’19 Kids and Counting’ Sentenced to 12 Years in Prison for Child Pornography Conviction
Follow us on Facebook
Follow us on Twitter