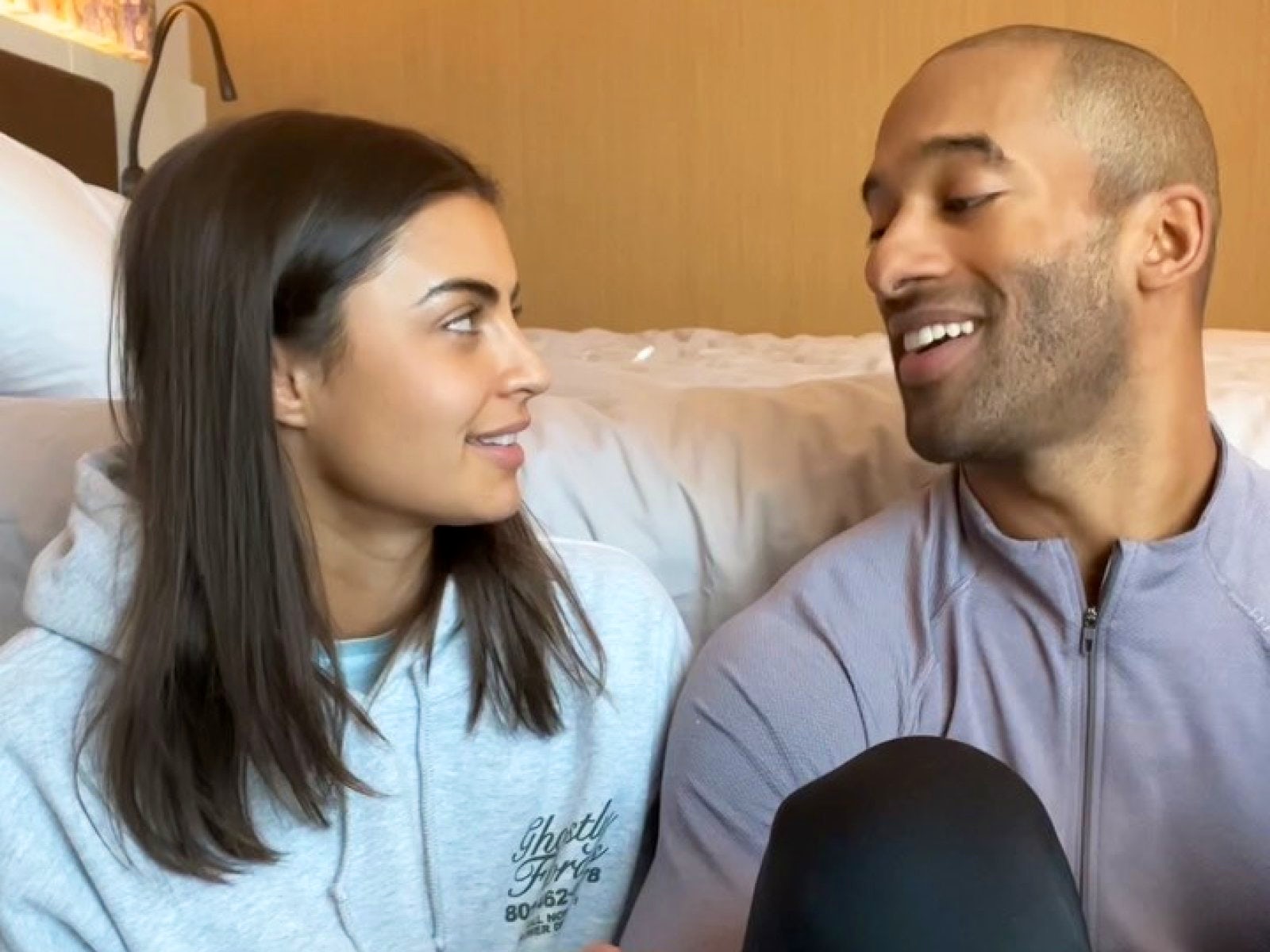 Tyler Cameron, Matt James and Rachael Kirkconnell have finally explained where Tyler and Rachael’s “beef” came from and what exactly happened between Matt’s girlfriend and his best pal to cause the tension.

“Where did our beef start, Rachael?” Tyler, 29, asked Matt’s girlfriend when the couple recently appeared together on Tyler’s “Everybody But Me” radio show.

“Definitely with you, for sure,” Rachael, 26, quickly replied.

She continued, “You were doing interviews left and right, just throwing me under the bus [and] saying I’m the ‘the old ball and chain.’ Actually, I take that back! [Matt] started the beef!”

Matt, 31, chimed in and agreed with Rachael’s assessment of the situation.

“I’ll tell you where the beef started… So basically, I hadn’t had a girlfriend, like, a serious, committed relationship in years. So coming off of [The Bachelor], I didn’t know what it meant to be, like, a boyfriend yet. My boyfriend/girlfriend was still technically Tyler,” Matt explained.

Matt and Tyler went to college together and were best friends before Matt appeared on The Bachelor.

“I didn’t know that, like, I had to spend more time with [Rachael] than Tyler yet and include you in things,” Matt said.

Rachael insisted the three of them could’ve just “spent time together,” but Matt clarified, “I know, but at the time, I didn’t know I had to include [Rachael] in those things. And I was doing boyfriend-girlfriend things with TC still.”

Matt admitted he was spending a lot of time with Tyler, failing to give Rachael equal time.

“I wasn’t going to say that,” Rachael noted.

“But that’s what I feel it was. I wasn’t balancing my time,” Matt said.

“And then I tried to balance it by, like, including [Rachael] in the things that me and TC were doing. And then, in part, it was messing up y’all’s relationship. And then I went on Andy Cohen.”

Rachael said Matt’s appearance on Andy Cohen is what she was “going to say” sparked the beef.

The couple was referring to Matt’s May 2022 appearance on Watch What Happens Live With Andy Cohen when he confessed that Tyler and Rachael had a “love-hate relationship.”

“And then articles came out, and that’s where all the interview questions came [from],” Rachael said. “And [Tyler] was like, ‘Yeah, I hate her.'”

In July 2021, Tyler was asked about Matt’s interview on the talk show and his seemingly strained relationship with Rachael.

“Do we have a love-hate relationship? I think it’s just we have two strong opinions and the way we see things,” Tyler said at the time. “We sometimes clash, but at the end of the day, we’re all cool and it is what it is.”

On Tyler’s radio show, he revealed how his friendship with Rachael actually got off to a great start.

Tyler shared how when Rachael moved in with Matt in New York in Spring 2021 — following The Bachelor couple’s brief split over Rachael’s early 2021 racism controversy — the Season 15 The Bachelorette alum actually had “a ball” with her.

“I had fun with you. I was like, ‘Oh, she’s way more fun than Matt, like, she’ll actually drink with me and have fun with me. She won’t go to bed at 10:30PM when we’re all trying to go out,'” Tyler explained.

“We’d have a little party at the crib and Matt’s asleep. I was like, ‘Oh, she’ll be great. She’ll be a lot of fun.’ And then, I just kept waking up hungover from all our partying and Rachael’s like, ‘You need to do better Tyler.'”

Rachael said her jab actually came “out of love” for him, and then Tyler continued, “She was like, ‘You need to not be acting like that.’ And, like, I was spiraling. I was going through it.”

Rachael agreed that Tyler was “going through a phase” at the time, and Tyler confessed it was “a dark time” for him. In fact, Tyler said he was “down and depressed” for about six months and it was a “terrible” time in his life.

“And I was like, ‘Man, if this girl don’t get out of here — she takes my homie and then she’s over here in my crib [with] her makeup everywhere. And now she’s telling me how I’m supposed to be? Uh uh!'” Tyler shared with a laugh.

Rachael reiterated how “anything” she ever said to Tyler was “from a place of love.”

“Because I knew you were hurting,” Rachael explained, “and I personally don’t think, like, going and getting drunk and all of that is — I think there’s a time where you can get things out of your system, but I do think at one point you have to, like, give yourself some TLC.”

Tyler said, “No doubt,” and added, “I was just running from that.”

“And I was trying to tell you that you were,” Rachael said.

Tyler shared how he “looked at [Rachael] like a sister right away” because she was Matt’s girl.

“I was like, ‘I know she’s looking out for me, but I don’t want to hear sh-t.’ So I would just give you attitude or mess with you,” Tyler admitted. “Because I looked at you like a sister, you know what I mean?”

Rachael acknowledged that she was “fine with that” until “all of the articles and stuff started coming out.”

Rachael said she wondered if she had done something to piss Tyler off and so she texted him seeking answers.

Tyler admitted that Rachael was “1,000 percent right and in the right” and she was just “looking out” for him.

“But I was being a little stubborn piece of crap,” Tyler confessed, “which I can be.”

Rachael assured Tyler that “spiraling out” is okay once in a while, as long as he doesn’t “turn it into a lifestyle.”

“If you want to be in a relationship, I don’t think that’s the lifestyle you should be doing,” Rachael concluded.

Tyler chimed in that “it’s not a sustainable lifestyle” for a single man or a man in a relationship.

“I don’t care who you are — you shouldn’t be going out and getting hammered every single night. It’s not good for you,” Rachael said.

“It’s not,” agreed Tyler, who is currently single but went out on a date with the former Very Cavallari star Kristin Cavallari on New Year’s Eve.

Matt and Rachael briefly split in February 2021 during Rachael’s memorable racism controversy — which resulted in former The Bachelor host Chris Harrison and ABC agreeing to part ways — but Rachael was extremely apologetic and so she and Matt reconciled in April 2021 and have been inseparable ever since.

Matt and Rachael have been traveling the world together, but they have yet to get engaged.

Rachael told Us Weekly in June 2022, “The only timeline I give him is I was like, ‘I gotta have kids before, you know, I can’t have kids.’ So keep that in mind.”

Rachael said she and Matt weren’t concerned with others’ expectations for their relationship and future together.

“I feel like it’s pretty crucial to just have fun with one another no matter where we’re at or what we’re doing,” Rachael shared. “We got to make the most of everything.”

And Matt told the Los Angeles Times that same month, “We’re one of the only couples from that franchise still going strong. The reason is we’re going at things at our own pace. We’re not playing games that a lot of people play just to stay in that circle.”

Matt said on the May episode of Watch What Happens Live that he had a feeling Rachael was The One for him when they met on the very first night of filming The Bachelor in late 2020.

“When I met everybody that first night, [our] interaction was the most genuine,” Matt said, according to People. “I was looking for that genuine connection and just realness and she exuded it. And there it is.”

Matt also reportedly wrote in his book, First Impressions: Off Screen Conversations with a Bachelor on Race, Family, and Forgiveness, that he wanted to spend all of his time with Rachael while taping the show.

“In the beginning, she cut through the polished front I’d honed and into my nerdy side,” Matt wrote of Rachael.

“We debated who was the bigger fan of How to Train Your Dragon and Marvel movies. I observed her empathy from afar, noticed how her kindness extended beyond our time alone and to everyone else she encountered.”