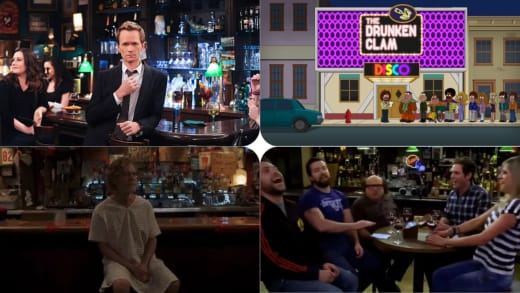 After a hard day working, some people prefer resting at home before the next day begins. Others go to their favorite bar for a cold drink and honest, unfiltered conversation.

On TV, bars are much more significant. They are more than the place you go to get drunk and probably make bad decisions. Essential plot points happen in bars. People meet and fall in love inside bars. Breakups also occur in them.

For some characters, bars help them put food on the table and clothes on their backs.

We have rounded up seventeen iconic bars and clubs that viewers and characters adore or hate. They may even inspire the name of the bar you might open.

Kicking us off is the bar, where an entire show is almost exclusively set in.

Cheer is owned by Sam but has had many owners before him, and he later sells it to someone else.

Cheer is the perfect setting to dive into issues such as feminism, homosexuality, and addiction.

Cheers was never afraid to discuss the seemingly undiscussable, and any stranger or regular could walk into Cheers and teach the others a little something.

This bar is essential in the show as many vital moments happen here.

It is where Ted, Barney, Lily, Robin, and Marshall hang out, as it is conveniently located under Ted, Lily, and Marshal’s apartment.

The bar differs from most of this list because it offers a full kitchen service.

Fun fact: the bar is based on four bars where the show’s crew used to drink and is named after its associate producer.

Molly’s had a few names before the owners chose to call it so.

It is owned by Christopher, Mouch, and Trudy Pratt but has had other owners.

Members of Firehouse 51, as well as other first responders, frequent the bar.

It is inspired by a real bar called Lotties Pub, where the show’s exterior scenes are shot.

The bar is located across from Grey Sloan Memorial Hospital and is owned by Joe. It has been nicknamed Joe’s after the owner.

It is where staff from the hospital go on dates and relax after their shifts.

Joe has owned it for over fifteen years, although he hasn’t been seen in it in recent years, like early on.

Many first meetings of romantically inclined couples have happened here.

13. Three’s a Company (The Regal Beagle)

The Regal Beagle was where the roommates would usually hang out.

Before its use lessened in later seasons, it was where they would meet each other and their dates and relax and drink beer.

At some point, the bar inspired real-life cocktails based on the show’s era.

The bar is located in Montauk, New Jersey, and is owned by The Porters.

The bar is the lifeline for the family when they have money problems and have to sell their house, thus moving above the tavern.

It was destroyed when Charlotte set it on fire, and Jack decided not to rebuild it.

La Bonne Nuit is owned by Veronica Lodge and can be found under Pops.

It is a speakeasy that shelters the characters from the reaches of Riverdale’s big bad, Hiram Lodge.

Over the years, despite Hiram’s efforts to get it closed, it has persevered.

It has been the venue for some of the most iconic musical number performances by Veronica, Cheryl, Toni, and Kevin.

The Drop is owned by Deran Cody, the youngest of the Cody brothers, and is found at Oceanside.

After realizing that crime won’t pay for long, Deran decides to invest his money and buy the bar. It is not the best investment decision since the bar seems to cause more trouble than it returns in profit.

The bar has a back room where beer is stored, and Deran crashes sometimes.

It has seen wild sex from Deran’s hookups, some brawls, and assaults, and it’s even home to a murder.

Truth is a high-end club owned by James St. Patrick in New York.

Like Deran, James used Truth to escape his life of crime.

From its early days, Truth was a headache for James. From constant attacks by New York’s night scene giants and the constant intrusion by his double lives when they would bleed into each other, it gave him sleepless nights.

It was almost poetic when the club was the last place James breathed despite it being his second chance at life.

The Sidestep is owned by The Walker family and is located in Texas.

It is a family-run business where anyone of age has worked, including Cordell, Liam, and Stella.

It has been the scene for rivalries, romance, and self-searching.

It offers a soft landing for the Walkers but has also faced legal problems, especially when August — a minor — has a party there. And served alcohol to other minors!

Babylon’s owner is unknown, located in Pittsburgh, where the show is set.

In a world that openly hates Queer people to the point of shooting out gay bars, Babylon offers a safe space for Queer men in Pittsburgh.

It has the signature thumpa thumpa found in many gay bars from loud pop music.

The number of sexual and romantic quests on its dance floor and bathrooms can’t be quantified.

The Pynk is primarily owned by Uncle Clifford and situated on one side of the Mississippi River. Uncle Clifford inherited it from their mother after she passed on.

It is the lifeline to many souls in the south and most to the strippers who grace it every evening.

It has been the venue for drama, arguments, sex, drugs, alcohol, and an occasional shootout.

It has undergone various problems, including a potential rival casino, crime, and COVID.

The Drunken Clam is owned by Jerome and is found at the fictional Quahog.

It is where the four friends come to drink after doing nothing.

Many not-so-brilliant ideas have occurred to the gang here, whether under alcohol or not.

It has also been the scene for a fight between Peter and his biggest enemy — the chicken.

Bada Bing is owned by mob boss Tony Soprano and is located somewhere in New Jersey.

It serves as a regular strip club and a front for mob operations.

At the back, there is an office and a lounge where the mob guys hang out doing absolutely nothing before going to harass and shakedown actual business owners.

It has been a scene for drugs and murder. Despite the gentrification happening in the neighborhood, it perseveres.

It is where the hockey players go to be roasted by Shoresy and rejected by girls.

The hicks may not fight at weddings but show muscle at MoDean’s.

Someone might have a good time if they are not constantly sexually harassed by Gail.

Paddy’s ownership is a murky affair like many others in Sunny. Charlie, the whole gang, or no one might own it. It is found in Philadelphia.

Many events happen here. It is impossible to single out one thing. But it can be said with absolute certainty that many horrible ideas have been born here.

The fact that the bar still stands is a miracle as it runs itself.

Many crimes and immoral things have happened here. The list is endless.

Veronica and Kevin Fisher own the Alibi. It is found in Chicago.

The Alibi is as iconic as the Gallagher kitchen.

Insane stuff has happened here, including illegal business, death, robbery, and multiple sexual assaults. The bar boasts the title of the most rapey bar in the Southside.

It is where Mickey iconically came out and declared his love for Ian. Of course, it ended in a massive fight between Mickey and his dad, but a stand was made that day.

So, which one of these fictional bars would you want to mingle with its patrons if you had the chance? Which one would you not pass near its street if it saved your life? Let us know in the comments.

‘The Dragon Prince’ Season 5 to Release in 2023 & What We Know So Far
Who Is the Richest Shark on ‘Shark Tank’? A Look at the Cast’s Net Worth
TV Ratings: La Brea Craters, Night Court Continues to Drop
Is ‘Chicago PD’ New Tonight? Everything We Know About Season 10 Episode 13
Recently Added Episode Titles – Various Shows – 29th January 2023
Follow us on Facebook
Follow us on Twitter