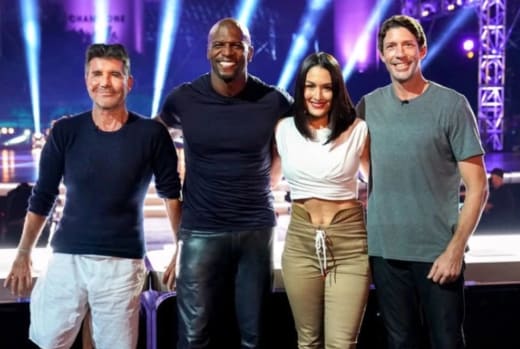 America’s Got Talent: Extreme will not be returning to production shortly.

Last week, the series halted production after an accident that sent stuntman Jonathan Goodwin to the hospital with critical injuries.

“Our thoughts and prayers remain with Jonathan Goodwin and his family as he continues to recover from his accident on Thursday,” an AGT spokesperson said in a statement to PEOPLE.

“In order to focus on the wellbeing of our crew, we will be temporarily pausing production on America’s Got Talent: Extreme and will resume the last few days of filming at a later date.”

“The health and safety of our cast and crew continue to be our priority.”

According to TMZ, Goodwin was “suspended 70 feet in the air in a straitjacket hanging by his feet from a wire,” which two cars “suspended on either side of him swinging back and forth.”

According to the outlet, the stunt involved Goodwin freeing himself to land on an air mattress below.

However, the performer was “sandwiched” in between the two cars after they smashed together.

“During a rehearsal last evening for America’s Got Talent: Extreme, an accident occurred in which escape artist Jonathan Goodwin was injured while performing his act,” a spokesperson for the show explained after news broke of the incident late last week.

“He was responsive and was immediately taken to the hospital where he is continuing to receive medical care.”

“Our thoughts and prayers go out to him and his family as we await further updates on his condition.”

It’s unclear when production could resume, and we still don’t have an update on Goodwin’s condition.

He appeared on AGT during its 15th season, and has also appeared on the British edition of the series.

America’s Got Talent: Extreme is set to star franchise veteran Simon Cowell on the judging panel, as well as newcomers Nikki Bella and Travis Pastrana.

Terry Crews is also set as host for the new iteration of the reality series. AGT: Extreme “will showcase the most outrageous, unique and jaw-dropping acts of enormous scale and magnitude that simply cannot be confined to a theater stage,” according to NBC’s description.

“Each week contestants will go head-to-head in the most wild, intense and often times beautiful performances to vie for a $500,000 prize and the ultimate title, the champion of America’s Got Talent: Extreme.”