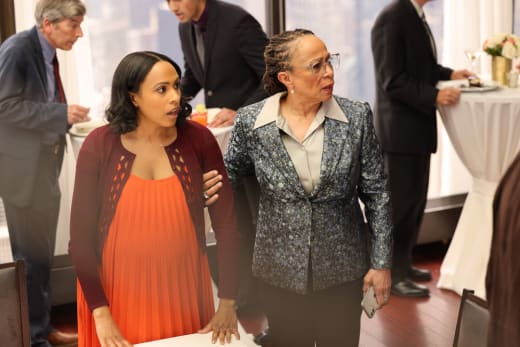 Everything went up in smoke. LIterally.

Chicago Med Season 7 Episode 22 offered one of its trademark big cliffhangers s the season drew to a close. Unfortunately, this one means that we’re stuck with this stupid Milena/Scott plotline a while longer once Med returns in the fall.

Med always goes for these huge season-ending cliffhangers. We always fade to black as someone faces life-threatening danger, and more often than not, it involves Will.

We’ll get a crossover appearance from our favorite Chicago Fire characters when Med returns in the fall, if we’re lucky. After all, someone has to put out this blaze and save our heroes’ lives!

However, this cliffhanger was unnecessary when so much else was going on that was more compelling.

The undercover storyline is not nearly as interesting as the more ordinary drama of Marcel and Blake being on the outs over the decision he made for her while she was unconscious or Vanessa meeting her biological father for the first time.

This storyline has become more and more unbelievable, and this cliffhanger was the worst of it.

Not only did someone set the building on fire, most likely on purpose, but a goon attempted to take Milena out and got shot himself while she was wandering around injured, and Will and Scott were caught in the blaze.

So many crazy things happened in that scene that it felt like a parody of intense cliffhangers. Talk about over-the-top!

It’s a shame that the season finale had to end on such a ridiculous note. The rest of the hour involved enjoyable storylines and interesting dilemmas.

Choi resolved his conflicted feelings about not knowing his father was gay, both by encouraging Zach to forgive his dads for not wanting him to play lacrosse and by giving the honorary flag the military gave him to Gerald, his father’s secret lover.

The scene between Choi and Gerald was short but effective. Gerald didn’t say a word when Choi gave him that flag, and neither did Archer, who was standing nearby, watching.

That one action was deeply symbolic on so many different levels. Choi acknowledged and honored his father’s life partner and made his peace with not knowing Gerald existed while his father was alive, while Gerald responded with grace.

That moment of acceptance meant a lot to Gerald and showed healing and growth on Choi’s part. Well done!

Choi and Archer’s case was one of the more minor storylines, but it was an effective catalyst for things to come.

Both Maggie and Archer reached out to people they had not contacted in years after Erin forgave her mother enough to sit by her bedside while her mom lay dying.

Peter: I’m just trying to protect him. You do understand?
Archer: I understand. But speaking from personal experience, sometimes the urge to protect can do more harm than good.

Archer has spoken before of his estranged son and even advised Peter not to make the same mistakes he did. I’m eager to meet this guy! Let’s hope he turns up at the hospital next season.

As for Maggie, let’s hope that reopening the door to Grant isn’t a huge mistake. While it was important for Vanessa to get to know her biological father, it seems like she may have opened Pandora’s box here.

Grant didn’t seem to know or care that Maggie is happily married. He appeared to be just as smitten with Maggie as when they conceived Vanessa. That’s undoubtedly going to lead to trouble somewhere down the line, especially since Maggie changed the subject instead of setting him straight.

Charles’ evaluation of Scott and Maggie’s patient seemed like an afterthought. It’s too bad we didn’t have that on-screen, which might have been emotional.

Instead, most of his screen time was devoted to his weird relationship with Lonnie. I’m glad that he broke things off with her. Regardless of what she might have thought she was doing, she spoke to him like she was his therapist.

That’s not a healthy basis for a romantic relationship. Her attempts to claim that Charles’ healthy decision to break things off was due to his “fear of intimacy” that she “expected to come up” felt manipulative.

Therapy students, take note: this whole mess is why dating a former patient is a terrible idea, even if you’ve waited a year after terminating therapy.

Will and Asher’s patient presented one of the more interesting ethical dilemmas the series has had. While Julia was physically fine and could undergo the transplant surgery, Asher was right that she deserved to know the truth before making this type of commitment.

You would risk a kid’s life because he can’t promise eternal love?

Will was also right that Owen would die without a new kidney, and Julia was a perfect match. Still, it would have been horrible for Owen to break up with Julia after he already had her kidney in his body.

Asher made an impression on Owen when she talked to him about the meaning of Julia’s sacrifice, and I’m glad she did. Julia made an informed choice to go ahead with the surgery even though Owen had been stringing her along for way too long, and that wouldn’t have happened if Asher hadn’t convinced him to tell her the truth.

Meanwhile, Marcel and Blake’s drama was somewhat predictable, but the jury’s still out on whether Blake can operate again.

If physical therapy restores her skills, she may forgive him eventually. Otherwise, it’s probably over for these two.

And finally, Sharon’s daughter had her baby! The advertisement made it look like this would be a central part of the episode, but Tara didn’t even appear until the last fifteen minutes of the hour.

Still, she gave birth to a healthy and adorable baby boy, even if she had to deliver on top of a restaurant table. Tara is right — she will have quite the story to tell the little one when he’s older!

Your turn, Chicago Med fanatics. Hit the big, blue SHOW COMMENTS button and let us know your thoughts about the season finale and what you’re hoping for on Chicago Med Season 8.

Chicago Med will return with all-new episodes during the fall of 2022, but in the meantime, you can watch Chicago Med online whenever you want.