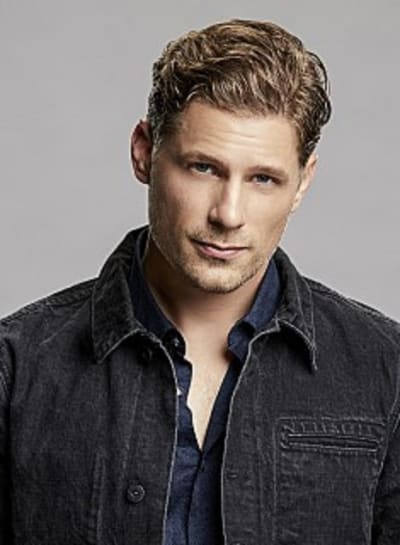 We’ve loved watching Matt Lauria since he appeared as Luke Cafferty on Friday Night Lights. His career took off from then, and he’s starred in numerous series since, including Parenthood, Kingdom, Tell Me a Story, and even the original CSI: Crime Scene Investigation.

TV Fanatic chatted with Matt Lauria about when we’d learn even more about Josh’s family, what’s next for Josh and Allie, and if he’ll help Maxine take down Anton Wix.

Hi, Matt. What appealed to you about playing Josh on CSI Vegas?

It was one of the most exciting character descriptions I’ve ever read. I’ve done a little bit of this before; it’s sort of new territory for me, which was exciting. The character writing was incredible. I had a fantastic meeting with Jason Tracy, our unbelievable showrunner. He’s so intelligent, and he gets it.

It was the combination of having an extraordinary meeting with him and reading this excellent character description and the few scenes I did for my audition were fun. The thing that attracts me to a role is something different than what I’ve done before, something that’s challenging and gets you a little nervous.

I also like something two-dimensional, and there’s something, whether there’s an internal conflict or tension when there are conflicting sides of your personality since people are not just one thing.

It’s like a murderous mob boss and a great father. Do you know what I mean? Yes, so that stuck with me, and Josh is full of that. He’s this guy who grew up in criminality and around criminals and knows criminals, and he’s been involved with something probably many times against his will with family pressure.

That’s just the way things have been.

He has a heightened sense of justice and has excellent principles, and feels as though the work he does with CSI is repaying the karmic debt accumulated by his family.

Josh is also really sharp and confident and sometimes has that Han Solo edge and an Augusta on a gravitas to him while being in touch with the victim and being sensitive to people who have been taken advantage of, including animals.

Just in that little character description, this dichotomy within him gave me so much to chew on and be curious about even before diving into the sea. It was an attractive proposition.

On that note, when are we going to learn more about Josh’s family? So far, we’ve loved seeing his love of horses and his soft spot for kids in foster care.

We get these little nuggets. You just mentioned some excellent ones. Along the way, people have to piece it together and investigate to pick up the clues.

I love how Jason has delicately and insightfully sprinkled in these clues for people to grab onto, and you found some back as early as  CSI: Vegas Episode 3 when we saw the mask hidden under the bee colony.

We’re on the woman’s land, and I tell Max that I can’t believe this woman let us search her land without a warrant and showed them how she feels about her son. Without putting too much of my opinion into the situation, I think Josh was saying, look, man, what a way to double-cross your family. That’s such a No-No, where I come from.

On CSI: Vegas Season 1 Episode 1, I say to Max, without making a big deal of it. I said I know what it’s like to come from a neighborhood like Danny Yates, the victim and what you’re up against. Not everybody turns out wrong.

And then later, in CSI: Vegas Season 1 Episode 5, I mentioned foster care. I feel for this kid and say it’s better to have someone involved that loves you and no one at all. Trust me. I’ve been in foster care. I mentioned that to him, and I spent some time where you’re going. Josh has been through some traumatic stuff.

It’s not part of his nature to talk about it, and he keeps things close to the vest.

Then, an ongoing interesting conversation comes out at Rehabilitation Ranch, and Max and I are talking about nature-nurture when we’re talking about her son going into Hospitality at a casino.

When you do your investigative work, as you have done, those moments pop up when I talk about my uncle and my mom and all that. I think Josh had to do a lot of personal work and self-work to heal from his past.

I agree. I also really enjoy Josh’s relationship with Maxine. It seems so genuine. Will we see him interact with her as she tries to get her job back or help her take down Anton Wix?

Josh loves Max. He admires her and looks up to Max. She’s like a cool older sister, the most intelligent person in the room, and has a solid moral compass. I think Josh was fortunate to work with someone as inspiring as her and to be in a situation where they trust each other to speak their minds.

I could talk honestly about her giving her son a chance to become who he wants to be. She’s the mom, but what about his perspective? And she can also speak her mind, so it’s a relationship that Josh holds very dear.

If Max is in danger, that’s my family. Max and Allie are my family and, to a certain extent, Chris as well. I admire Chris. He’s gotten to feel like a younger brother to me and a brother-in-arms certainly. If anybody’s messing with the family, of course, Josh will get involved and even make a compromise if need be.

Absolutely. And speaking of Allie, Everybody seems to love Josh and Allie. Are we ever going to see it move past a flirty friendship?

You’re going to see some more moments In Episode 9 and Episode 10, where Josh takes some risks with Allie because the truth is Josh and Allie get along amazingly work well together. We’ve got great shorthand, we work well in tandem on solving cases, and then there’s a very playful personal connection.

I think Josh is concerned with matching it up like it’s just incredibly risky. However, there are some moments in Episodes 9 and 10 where Josh takes more of a risk than he has before.

Excellent. And is there anything else coming up in the last three episodes, a specific case or scene that you’re looking forward to the fans seeing?

We’re running out of real estate here. As we get closer and closer to Episode 10, the case is moving, and we still have nothing until the 8th when we finally have something solid to hold onto, but it’s taking a long time to get something and any ground to stand on. That case is looming, large, and the stakes couldn’t be higher.

Some new gnarly exciting cases are exciting to watch, and the victims are very unusual ones. I think people will be pretty surprised.

Recently, you’ve gotten to work more with Sara and Grissom. What does Josh think of Grissom? I loved the blood spatter scene.

I don’t think Josh has had very many interactions with Gil since they’ve been back. He hasn’t had much time to form a personal opinion, but he is incredibly aware of the legacy of how brilliant this man is. He’s a legend, second to none as far as his insights. And what his particular abilities and aptitudes are.

The man commands a tremendous amount of respect just by his reputation. I think Gil’s imprint is all over this CSI lab, even though it’s a different building. It’s the same lab, and as Sarah was talking about the luminol, it’s Gil’s special recipe. It’s an honor to be amid such greatness.

Josh has also been careful about jumping on the bandwagon with believing Hodges based on character reference. I think he’s very similar to Gil in that way since they both like to wait for the evidence. They want to see what’s there. So obviously trusted the man’s opinion and judgment when I asked him about the spatter stuff. I enjoyed that scene.

There have been some instances where I’ve worked more with Sara than with Gil. Jorja has been there, just as steady as she goes in the earliest scenes when we were beginning. I think my first scene might have been it all of us together in that crime lab in the storage unit in episode 1.

Georgia was just so supportive because we all had a bunch of science copy to say, and we were learning how to fingerprint dust. It was many things to know at once and find your stride in, and she was so supportive and encouraging. She was just such a pro and had done this so much. She was very encouraging.

Do you think they’re going to get a season 2?

I certainly hope so. My impression has been that everybody has been pleased with how the season has gone.

I know that we’re chomping at the bit to do it again. Things slide into a groove as you get deep in the season, like episodes six, seven, and eight. It just keeps sharpening as we get more into a flow as a work community. Many heart-centered people are on the set, including the crew, upper ranks of the show’s development, and cast.

There seem to be lots of warmth and adoration from the fans as well. I know many people are looking forward to it if we get to do it again.

What would you like them to do with Josh if you get a season 2?

I like the family stuff. I like digging into history. It’s always enjoyable, really revealing stuff. Anything involving family and parents gets a lot of mileage because they strongly influence who we are as people.

I want to continue to flirt with the Allie relationship. I like the risk involved and wall, and I also like their connection. I like walking that line of I want this, but it’s dangerous. What if it messes things up? Josh values Allie so much that he doesn’t want to blow it.

I look forward to working with the wonderful family I get to work with. I love doing things with Paula. Mel, and Jay. There’s so much to still reveal about how these guys all know each other and how long we have known each other.

The Legacy characters are enjoyable too. Tonight in CSI Vegas Episode 8, I have a fun scene with Sara, and that was a real treat to have a one-on-one scene with her.

We’re always working on opposite cases. We’re working on whatever murder has happened each week, and they’re working on the Hodges case. There hasn’t been a lot of overlap, but if we get another season, we might get to mix it up a little bit more.

You can catch Matt Lauria in CSI: Vegas, which is currently on Wednesdays at 10/9 c on CBS.

The Walking Dead: World Beyond – Returning Point – Review
TV Insider’s Top 25 of the Week (November 22-28): ‘Hawkeye,’ ‘Dancing With the Stars’ & More
‘Married at First Sight’ star Michaela Clark slams Zack Freeman and Bao Huong Hoang for dating — “Some of us have a moral code”
Yellowstone – Episode 4.05 – Under A Blanket of Red – Press Release
Blue Bloods – Episode 12.09 – Firewall – Press Release
Follow us on Facebook
Follow us on Twitter