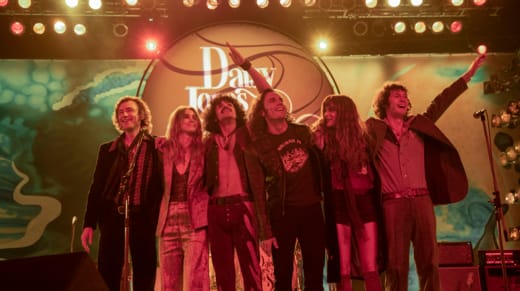 Are you ready to enter the world of Daisy Jones & the Six?

The teaser features “Regret Me,” one of 24 original songs written exclusively for the series and recorded by the cast.

What’s more, the original music will be released by Atlantic Records during the rollout of the series, which premieres March 3, with new episodes released every Friday through March 24, exclusively on Prime Video in more than 240 countries and territories worldwide.

Based on the best-selling novel by Taylor Jenkins Reid, Daisy Jones & The Six is a limited musical-drama series detailing the rise and precipitous fall of a renowned rock band.

In 1977, Daisy Jones & The Six were on top of the world. Fronted by two charismatic lead singers—Daisy Jones (Riley Keough) and Billy Dunne (Sam Claflin)—the band had risen from obscurity to fame.

And then, after a sold-out show at Chicago’s Soldier Field, they called it quits.

This is the story of how an iconic band imploded at the height of its powers.

The cast is rounded out by Sebastian Chacon as Warren Rojas, Nabiyah Be as Simone Jackson, and Tom Wright as Teddy Price, with a special guest appearance by Timothy Olyphant as Rod Reyes.

From Amazon Studios and Hello Sunshine, Daisy Jones & The Six is executive produced by Reese Witherspoon and Lauren Neustadter for Hello Sunshine and Brad Mendelsohn for Circle of Confusion.

Scott Neustadter and Michael H. Weber created the series based on the novel by Taylor Jenkins Reid, who also produces.

James Ponsoldt directed the first five episodes and serves as an executive producer, Nzingha Stewart directed four of the remaining episodes, and Graham directed one.

The series will feature original songs written and produced by Grammy Nominated producer Blake Mills and a number of other talented co-writers.

The teasers offer a glimpse of the band’s success and some of their lows.

Check out the clip below.