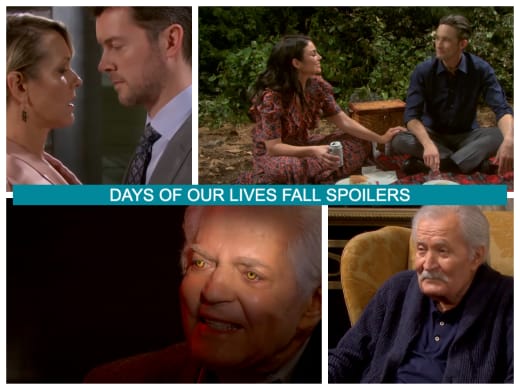 Days of Our Live promised something wicked would come to Salem.

Doug’s sudden possession by the devil is only the beginning… but mixed in with that craziness is a whole lot of romance and more mundane action.

Spoilers for Days of Our Lives during Fall 2021 promise a ton of passion and excitement… are you in?

According to the spoiler video, things will heat up between Johnny and Chanel as well as Rafe and Nicole… or EJ and Nicole!

Yep, EJ is going to ask his ex-wife out on a date.

I hope Nicole has the sense to turn him down. After all, she hid her baby from him last time around, so why go there again?

Or will dating EJ make Rafe so jealous that he finally admits that Nicole is the one he wants?

Philip declares to Chloe that he will do anything for her and brings her some sort of present, and takes her on a romantic picnic.

Unfortunately, this may not last long with Brady still in the picture and Gabi and Jake manipulating the two men to be at each other’s throats.

There’s plenty else going on in Salem during the fall of 2021. Scroll down for all the details.

Roman and Kate are one of my favorite pairings. Plus, Roman needs something to do besides tend bar in the Pub and give advice (or judgment.).

This being Salem, it’s only a matter of time before some secret comes between them, but I’m all in for this while it lasts.

Johnny romances Chanel with his guitar.

Johnny was already helping me fill the hole in my heart from JJ’s sudden departure, and this cements it.

What sweet scenes these will be. The romance is a nice break from all the Johnny vs. EJ angst, and the ridiculous devil possession storyline connected to Johnny’s movie, too.

Let’s hope it doesn’t lead to any more annoying interference from Allie.

Philip vows to do anything for Chloe.

I hope. Days of Our Lives is going to give Philip and Chloe a real chance.

With Brady still in the picture and Gabi and Jake manipulating Philip and Brady to be at each other’s throats, I’m afraid Philip and Chloe won’t last.

But a romantic picnic and Philip bringing Chloe some sort of present? Yes, please!

Paulina and Abe set a date for their wedding.

With Paulina’s secret hanging over their heads, this is bound to end in disaster.

Chanel’s upset that Paulina chooses Lani as maid of honor, the officiant may be possessed by the devil at the time, and Olivia’s coming back and will certainly put her nose in things.

What could go wrong?

Ugh. DAYS always has men punching out their romantic rivals. It’s a violent, outdated trope that needs to go.

Plus, that opens the door for Gabi to swoop in and try to get Victor to replace Philip as CEO with her.

Not to mention a horrified Chloe may break up with Philip over this. Ugh.

Is this for real, or is it part of Johnny’s movie?

It looks like a redux of the John/Marlena conference table scene.

Although I ship Rafe/Nicole, I’d rather they not start in some crude way or by sneaking around behind Ava’s back.

I’m surprised Gabi doesn’t know it and will be doubly surprised if she gives a damn.

Gabi isn’t exactly squeaky clean herself. Her schemes rival Sami’s and have gotten people killed or sent to mental hospitals.

Still, though, I’m glad Philip is onto these two idiots’ attempt to undermine him. Now, if only he’d use his brain when it comes to Brady/Chloe…

This is what a lot of viewers have been waiting for!

While I wasn’t a fan of Sarah’s baby-talk and immature behavior around Xander, it didn’t make any sense that she’d be left on that island forever without anyone having a clue she was missing.

Xander will probably pull an Eric and dump Gwen as soon as he learns his true love needs his help, and that’s fine with me.

EJ asks Nicole out on a date.

Please, soap gods, let Nicole have the sense to turn him down!

EJ’s abuse of Sami over the past several months was bad enough.

Let’s not have Nicole be his new punching bag, please.

Ben agrees to have children with Ciara.

Agrees or is pressured into it?

I don’t think Ben is done worrying about his past, and he doesn’t seem to be in the right frame of mind for having children.

Years ago, Jennifer worried about passing on Laura’s schizophrenia to any future kids, and Ben may have similar issues… but will they be explored sufficiently?

As much as I hate this storyline, I have to admit a possessed Doug is super creepy. Those eyes!

Of course, Doug is just the vessel.

As soon as the devil, who seems to be as obsessed with Marlena as Stefano was when he was alive, jumps into her body, all hell will break loose. Literally.

Welcome back, Victor! I’ve missed his one-liners and his putting his nose into all things Kiriakis.

He’ll probably find himself in the middle of Brady/Philip again.

I hope he tells them both off and has some choice words for Gabi, too. And I’m sure he’ll also have something to say about this Justin/Bonnie fiasco.

Days of Our Lives airs on NBC on weekday afternoons. Check your local listings for airtimes or watch online on Peacock after 8 PM EST each weekday.

Netflix’s ‘Munich – The Edge of War’: January 2022 Release Date & Everything We Know So Far
Roswell, New Mexico Season Finale Review: Trust The Science
Smallville: It’s the 20th Anniversary, and We’re Celebrating!
‘Married at First Sight’ star Bao Johnny is “just trying to sh-t on me,” I’m not a different person on and off-camera
Composer Tim Davies Discusses the Score for Netflix’s ‘Maya and the Three’
Follow us on Facebook
Follow us on Twitter