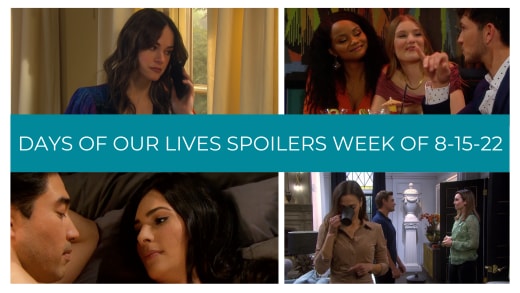 Days of Our Lives was the first American soap to feature a male-male wedding. Is it about to break another barrier?

Spoilers for Days of Our Lives during the week of 8-15-22 suggest that Alex will ask to be the boyfriend of both Allie and Chanel.

Days of our Lives isn’t the first series to try a polyamory story — the defunct Aussie soap Neighbours did so in 2021, and there was a similar story on New Amsterdam Season 4. But will DAYS get it right?

While that would be an exciting development, Alex is not particularly likable, and he already made annoying comments about guys thinking two girls kissing is hot.

If Days of Our Lives goes there, let’s hope that any polyamory story isn’t done for shock value.

Days of Our Lives will be moving to Peacock in September, so it may have more freedom to explore spicier storylines. However, if Alex’s interest in the girls is purely sexual, that won’t be a compelling story.

There’s plenty of capacity for legitimate drama here. Allie is already the jealous type, and if Alex tries to date both women, there could be serious concerns about whether he’s equally interested in both women.

Days of Our Lives came close to this in 2013 with Will and Sonny’s platonic relationship with Gabi as they all raised baby Ari, though, so there’s hope they can pull this off too, even with a different head writer.

In addition to the Alex relationship drama, Days of Our Lives promises movement on the Rolf vs. Li front.

If you were surprised that Rolf gave up decades of loyalty to the Dimeras to comply with Li’s demands, you weren’t alone. But now, it appears Rolf isn’t quite as willing as it seemed.

According to the spoiler video, Rolf confronts Li, accusing him of wanting to kill Stefano’s son. And when Rolf gets angry, heads tend to roll, so Li better watch out.

We have eight spoiler photos below. Please scroll down to check them out.

No word on whether Gwen is there, but this should be compelling drama either way.

Let’s hope the focus stays on getting Ava to admit she’s lying about having married Jake.

We don’t need any more of Johnny and Ava’s potential hookup, thanks. JJ and Eve were bad enough without Johnny developing an interest in the woman who tormented his Uncle Steve and Aunt Kayla for ages.

Could Kristen be the real killer? Or does Anna suspect (rightly, of course) that Kristen has something else up her sleeve?

With Brady having denied Kristen custody, it wouldn’t be surprising if she had some nefarious plot involving her daughter. Maybe, kidnapping her back from California if Brady doesn’t bring her home soon enough?

Gabi makes a confession to Li about Stefan.

Now what? She already said that Stefan was the love of her life, not Jake. Is that what she will tell Li, or will she backtrack and say she never loved Stefan either?

Stefan is about to be resurrected. Li stopped it for the moment, but that doesn’t mean it won’t happen sometime soon, and then Li’s plans to hold onto Gabi will go down the drain.

Alex has a “date” with Chanel and Allie.

Considering how long it took Allie to accept her bisexuality and her feelings for Chanel, this won’t go over well with her.

But will Alex’s interest drive a wedge between the women that Johnny can exploit?

Kate is stunned by Lucas’s news.

Lucas has decided to plead guilty to kidnapping Sami.

This isn’t the first time he’s been in prison — he claimed to have shot EJ to protect Will back in the day — but this time, he actually did the deed.

Of course, despite the way all of Salem is vilifying Lucas, he’s hardly the first person to kidnap the love of his life to keep her away from some guy who was horrible to her. He’s just the first to go to jail for it.

Once again, Paulina is wandering around town, putting her nose in other people’s business. Can we find something else for her to do, please?

That said, hopefully, Roman forgives Kate sooner rather than later.

They’ve always been a strong couple with a lot of fan backing, so this nonsense doesn’t need to be the end of their relationship.

Steve is thrown when his daughter, Stephanie, returns to Salem.

If you watched Beyond Salem 2, you know that Stephanie got a text that called her back to Salem sooner than expected. But Steve doesn’t know that.

What is her story? And why didn’t Days of Our Lives lead with this highly-anticipated return in its promo?

Whatever is going on with Stephanie, let’s hope it’s better than when Melanie returned to Salem after cheating some card sharks at a casino out of a ton of money.

Rolf confronts Li about his sabotage.

Li doesn’t have as much power as he thinks he does.

He is not a Dimera, and he’d be wise not to cross certain lines with them.

Like, for example, actively trying to sabotage Stefan’s recovery or kill him. That’ll wake Rolf up in a hurry to where his loyalties should lie!

Your turn, Days of Our Lives fanatics!

Hit the big, blue SHOW COMMENTS button and let us know what you’re looking forward to, what you’re dreading, and what your theories are about Days of Our Lives during the week of 8 -15-22.

Days of Our Lives is moving to Peacock on September 12, 2022. Until then, it airs on NBC on weekday afternoons. Check your local listings for airtimes or watch online on Peacock on weeknights after 8 PM EST / 5 PM PST.