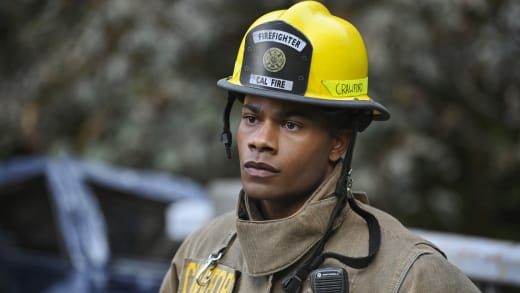 Things are finally starting to look up.

A difficult rescue puts everyone at their anxiety threshold on Fire Country Season 1 Episode 8. This rescue also triggers some bad memories from Vince’s past when he lost his daughter.

After a night of gambling, Manny comes to work sleep deprived and erratic. This puts him and Vince in a direct collision as each of them is not their true self.

The episode was directed by Fire Country’s own Kevin Alejandro, who plays Manny. It is a common consensus that he did an exemplary job, and we can’t wait for him to direct more of the show’s episodes.

The drama was dialed up to one hundred, and the action was great.

This truly felt like a finale. It could even pass for a season finale despite being a midseason one.

The biggest emphasis coming into the episode was that it was a finale, and there are things we expect of a typical finale. It introduces a new storyline to keep the viewer guessing and a wild final hour’s minutes to serve as a cliffhanger. And it checked both of these boxes.

But I found it to be even deeper than that. It dived into the story, letting us in some information we had not grasped before. We finally understand why Vince is so angry with Bode and why Bode transfers that anger to Jake, who channels it into working out, I assume.

But before that, while reviewing Fire Country Season 1 Episode 7, I mentioned that what we saw was the beginning of Manny’s fall out of grace. I was wrong. I wish I weren’t, but I am because the reality is even worse.

Most of us were not satisfied with the watch controversy resolution. Many thought that Manny was the one who stole the watch, pawned it, and used the money for gambling.

The theory seems a little far-fetched now that we have seen the whole picture.

Gabriella complained about huge charges made on her credit card that Manny has access to. After burning through all the money he had in the casino, he withdrew some more from the ATM.

This leads me to believe that it has been going on for a while now; hence not the beginning. He is in too deep.

This is having a huge effect on his ability to do his job. It has completely reprogrammed his mind into thinking about situations in terms of odds.

He literally gambles the siblings’ lives, choosing to save the sister and leave the brother.

For someone who has worked so hard to be where he is, it would be disheartening to see his fall.

Manny, however, wasn’t the only one who was off. The accident dredges up some very painful memories for him. The accident is similar to the one his daughter had down to the feelings of guilt from the dad.

I think Vince never cared much for Bode. His daughter’s death was just a pathetic excuse to hate him. He concluded that the accident must have been Bode’s fault extremely fast. He even admitted to hating Bode, something Bode heard.

That’s why Bode’s hesitation in trying and comforting him when he senses what he is going through is understandable. There is no telling how a person who hates you will react to you. It’s best to keep it safe and watch from across the road.

Despite not having a fire emergency, the episode’s emergency didn’t disappoint. It made the show feel truly like other first responders shows out there.

That doesn’t mean that some characters did not ignite some little fires.

Luke did something he deserves to be shamed for, Game of Thrones style.

He got the poor woman to open up and tell her secrets, and when she was most vulnerable, he made a pardon my french –  bitch move.

I won’t sit here and assume that he hadn’t had feelings for her for a long time but talk about awful timing, man. She has cancer, the loss of a job, and two children in two different ways.

And you chose the time as now? Sharon doesn’t need that.

Something else that she doesn’t need is to abuse her power. I don’t care whether she might be dying soon, but abuse of power is a huge no-no.

Poor Manny could not have said no to his boss when she requested such a favor. One might argue it’s because she opened up about her illness, but she still outranked him. His saying no could have meant the end of his career.

This Luke situation hit me by surprise. I questioned why the writers decided to do that, but it made for a great new finale storyline, so I can’t complain much.

Eve was back, and I found her friendship with Jake sweet. I am starting to dig the lesbian woman and straight man duo introduced to me by Hen and Buck from 9-1-1.

The show didn’t shy away from dealing with the trauma parents face when they lose a child. It is an ordeal so painful there is no word for it.

The episode set up a great cliffhanger with Bode trapped in a car falling into the river.

Will he survive? If he does, will he be okay?

We would love to hear your thoughts about this hour in the comments section, so don’t hesitate to leave a comment.

You can watch Fire Country online right here on TV Fanatic to catch up before the season resumes.

Lisa Loring, Original Wednesday Actress on The Addams Family, Dies at 64
So Help Me Todd – Episode 1.12 – Psilo-Sibling – 3 Sneak Peeks, Promotional Photos + Press Release
‘Faraway’ Rom-Com Movie is Coming to Netflix in March 2023
‘NCIS’: Rocky Carroll Reflects on Reaching 450 Episodes, Ponders Major Returns
Who Is the Richest Shark on ‘Shark Tank’? A Look at the Cast’s Net Worth
Follow us on Facebook
Follow us on Twitter