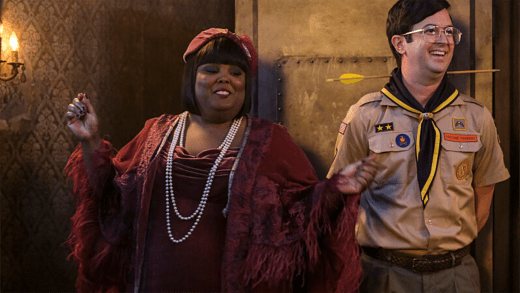 Jay and Sam’s plans to drum up business for the manor always start with the greatest intentions. However, one way or another, a wrench gets thrown in to mess things up. In this case, it’s their lack of a liquor license.

Not having a liquor license can’t stop them now! This is Woodstone Manor; the ghosts will find a workaround.

“The Liquor License” was peak fun shenanigans. Every plot and character was on the same page to serve a good time.

Even when you thought Sam and Jay would learn their lesson, they’d make a questionable choice to follow the ridiculous option. (Poor Pete, he never had a chance!) And the tension kept rising as they got more reckless with Sherri around to potentially catch them.

Plus, when you add in the fraternity plot, the ghosts were all having a great time too.

It was an exciting balance on all fronts, and the emotional beats with Isaac’s past added a nice layer to the B-plot. Everything flowed and weaved together quite nicely.

How could Jay not apply for a liquor license sooner? It’s one of the must-haves for any business!

Woodstone Manor has been in operation for a few months now, and the building has been in renovation throughout Ghosts Season 1. Jay had plenty of time to apply for the license.

Pete: I strongly advise against this! You’re gonna run a speakeasy in the house while that woman is performing inspections? This is crazy!
Sam: Yes, Pete, apparently, we are.
Alberta: Oooh, alright, Sam! You won’t regret it!
Pete: Yeah, unless they get fined, arrested, or put out of business.
Alberta: Either way, it’s gonna be a wild night! [Laughs manically]

This misadventure could’ve easily been prevented had he done what Sam asked of him. Or if Sherri hadn’t decided to expedite their review process.

That might be the theme of “The Liquor License” because every issue could’ve stopped itself from getting worse had someone listened sooner.

Once again, poor Pete and his good-guy attitude. He really does try to do the noble thing and steer Sam/Jay into choosing the safer option.

I giggled every time Alberta one-upped him during the debates with Sam.

Alberta’s (and Jay’s) options were the more exciting solutions. Sam wanted a successful event, and the best way to do that was by following Alberta’s plan of making a speakeasy. Which, in turn, did work since Elliot, the writer, loved the party.

Though, it could’ve gone wrong had one bad thing happened. Pete’s worrying was right, but Sam and Jay’s luck was much stronger.

Sam and Jay are lucky that Sherri didn’t discover the party in the vault.

Between the music and Blaine inviting more people to the event, the speakeasy was a powder keg that could’ve exploded. As I mentioned above, it would’ve only taken one thing for them to be discovered.

Sam: So, you’re saying we should wait for a storm?
Jay: No, babe, I’m saying we make our own storm.
Alberta: Is anyone else turned on right now?
Pete: A little.

For instance, Sam making a hole in the wall to grab the 100-year-old alcohol.

How did Sherri not hear the banging? A wall breaking sounds much different and louder than Jay tenderizing a steak. Good on them for getting away with it, but that was a close call.

Even the dead animal smell in the wall could’ve given them away. And Sherri was so close to the action too!

Hopefully, they’ve got all their ducks in a row now for the business.

We learned that Sam and Jay’s current debt total is $30,000 after the whiskey-tasting party. The event helped a little bit for their finances, but selling those $5,000 bottles of whiskey and the 100-year-old barrel would’ve helped them more.

It’s all in hindsight since they’ve already drunk the bottles during the party. However, it poses an interesting question about Woodstone Manor and its finances.

Is there anything else there they could sell to pay back their debt?

If those bottles were worth $5,000 each, there’s sure to be something else that could be equally as valuable. All they would have to do is ask Hetty or the other ghosts for what they could part with at the manor.

Elsewhere during “The Liquor License,” the ghosts competed to join new fraternities set up by Trevor and Isaac.

Was anyone even remotely surprised that Trevor jumped at the chance to start a frat? He’s got the passion and vibe in his blood. He was made for this role.

It made sense that Flower and Thorfinn would join his fraternity; both are much more outlandish and free spirits. Trevor’s idea of exciting initiation tasks and going to parties would be more thrilling to those two ghosts.

Hetty: Well, I don’t like that the event promotes alcohol use.
Trevor: Said the cocaine fiend.
Hetty: But I do like your description of it as high-end. It sounds snooty. Well done!

You could feel the happiness radiating off them after Thorfinn jumped off the roof.

Their smiles were beaming! It’s no wonder Sasappis and Hetty were charmed to join that side. They wanted fun, and Trevor could deliver with or without a party.

It’s a shame that Isaac was feeling left out. He truly wanted to start a frat to make up for the one he didn’t get into all those years ago.

Trevor was right about Benjamin Franklin!

Isaac: Well, the truth is, I wouldn’t even know what the inside of a masonic lodge looked like.
Trevor: What are you talking about? Was it all freaky blindfolded stuff?!

His actions toward Isaac were so manipulative and careless. Sure, it may have been a misunderstanding, but he knew Isaac longed to join the Free Masons. He played with that aspiration to get favors and whatever he needed; it was a total powerplay.

Let’s hope that Isaac puts the past behind him and enjoys his bonds with the new ghost frat. It may not be the stimulating conversations he dreamt of with the Free Masons, but it’s a group he’s connected with that welcomed him with open arms.

Now, over to you, Ghosts fans.

What did you think of “The Liquor License”?

Should Jay and Sam hold another whiskey-tasting event? Did you love how Alberta friendzoned Pete? Would you have joined Isaac’s or Trevor’s frat?

If you missed the latest episode of Ghosts, you can watch Ghosts online via TV Fanatic. Come back here and share your thoughts in the comments below.