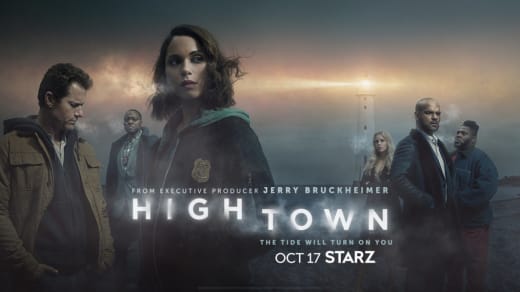 It’s been a long year without Hightown.

The thrilling Starz drama is back!

We watched the first four episodes, and it features everything that made the inaugural season a success and more.

Hightown Season 2 gets off the ground running, with the characters in very different places than before.

With Frankie out of prison, we get to see a different layer of his and Renee’s relationship, something that both Voelkel and Nolasco are happy about.

There’s also some drama on the horizon for them because Frankie’s cousin Jorge (Luis Guzman) is also on the scene, creating a lot of conflicts.

“He is the older cousin who Frankie really loves. And they obviously have a ton of history together,” series creator Rebecca Cutter shared, noting that the character is reminiscent of Joe Pesci in Goodfellas.

“He’s very comedic and sharp and funny, but very dangerous. He could turn on a dime,” Cutter continued.

Frankie is on the outside this season, says Cutter, adding that we get to see him managing his businesses while trying to stop Renee and Jorge arguing.

If you watch Hightown online, you know Renee is the reason Ray lost his badge, and Riley thinks there has to be some comeuppance on the back of it.

Al finds himself in this position of power, thanks to taking on the sergeant role after the suspension of Ray.

“Alan was sort of the sidekick in a way,” Don shares of the power shift, noting that his relationship with Ray has completely changed.

Don said that this creates an interesting dynamic as we move further into the world of the show. The actor also teased that we will get a much more comprehensive look at Al’s life than before, seeing his wife introduced into the story and such.

Al’s path crosses with Oscito, who finds himself behind bars after shooting at Jackie. Atkins teases that it’s a very different direction for the character.

“He’s really having to kind of find his way back and really kind of survival situation he found himself in. And he’s also dealing with the ramifications of the things that he did in the first season,” Atkins shares.

“So we really have to watch him kind of pick up the pieces and try to figure out what’s next.”

In many ways, Oscito has switched places with Frankie this season, but it seems like there are some problems between them. Atkins notes that we started to see a rift form in the first season, and it only gets worse.

Atkins says he thinks Frankie is probably concerned about whether Oscito will talk, which will be a significant driving force of their arc.

Both Don and Atkins were happy about the prospect of working together more closely on the second season.

“It was a real treat to work with Don,” Atkins said.

“There’s some really cool things that happen because of the opposition and the objective. Both of our characters are very much in opposition to each other.”

“So there are some really cool moments. And also, I didn’t get to work with Don very much in the first season. Happy to get the opportunity to have some more time with them,” Atkins shared.

Don said that he didn’t get much screentime with Atkins before this season, so he lapped up the opportunity to dig into their arc this season.

As for Jackie and Ray, their roles have essentially swapped this season, with Jackie having insider knowledge and Ray on the outside looking in.

“Everyone is kind of in a really new place this season,” said Rebecca.

“That was a really fun challenge. Jackie’s definitely where Ray was last season, you know, she’s really hot on the case.”

“In many ways, she’s kind of replaced drugs and alcohol with this idea of like being on the hunt and the investigation and the thrills.”

“I think that is kind of her new drug in Season 2.”

“Ray is now sort of on the outside looking in, and he has to really look at his life, and he’s trying all these different things to kind of fill that void, and nothing hits for him like police work. So ultimately, he by hook or by crook, he’s going to try to get back to that.”

Monica and James were happy with the decision to switch gears because it shows these different sides of the characters.

“It’s turned into this very special relationship because I think that we see ourselves in the other person,” Monica said of the pairing.

“In some ways, he’s one out of two people in my life that I feel like I can actually let my guard down and be vulnerable with because he understands the pain,” Raymond says of Jackie and Ray.

Jackie is not on drugs when we pick up, but Monica stresses that the character is battling her demons to keep on the straight and narrow.

The actress said that Jackie was very different on the first season to the one we meet in Season 2, adding that “we get to sort of see a little bit more of a tighter package with it, but like that mess still exists inside of her.”

James said that he has a lot of fun coming back and the show rewriting the rules because this is the first time he’s done a second season of a series.

“As an actor, I think changes are refreshing,” he said, citing Rebecca’s excellent creative choices.

“All these characters have changed over that time period that you haven’t seen them. Jackie’s changed. Ray has changed, maybe not for the better.”

“But he’s changed, and I’ve changed as a human being also. So, anytime you throw a curveball, it’s great. I want a lot more.”

As for Ray, he’s understandably in a very different mindset because of what happened with Renee, but James feels like Ray is obsessed with her to an extent.

“It haunts him. I think Ray haunts himself, and now he’s dealing with the repercussions of his actions, and I think there’s a struggle for Ray to recognize what is the truth and what is real.”

As for the big crime that kicks off the season, a new wave of drugs makes their way to the Cape, killing teenagers. That’s one of the major jumping-off points in the premiere.

“We really wanted to show sort of a wider impact. I mean, I think season one really focused so much on people who were kind of the criminal element. There was also an interesting idea about like which deaths does the public care about, which deaths the police focus on,” Rebecca said.

“There’s an aspect of these deaths that causes sort of a media sensation.”

Rebecca said that this raises the stakes for the police because these deaths become very high profile, but the ultimate goal is to expand the world of Cape Cod to show a larger world and the bigger effect.

Gary likes that the show is tackling these storylines because they are so relevant to the world today.

I asked Rebecca about how many seasons she envisions for the series, and she believes the show could go on for a while yet, and that she has some ideas percolating for a potential third season — and beyond.

Hightown Season 2 premieres tonight at 9 p.m. on Starz, and it will be available on Starz Play internationally at the same time.

‘From Scratch’ Zoe Saldana Netflix Limited Series: What We Know So Far
La Brea – Father and Son – Review
10 Movies & Documentaries to Watch to Get a Reel Feel for The Beatles
All American – Episode 4.07 – Prom Night – Press Release
Biggest Kids Movies & Shows of 2021 According to Netflix’s New Top 10s
Follow us on Facebook
Follow us on Twitter