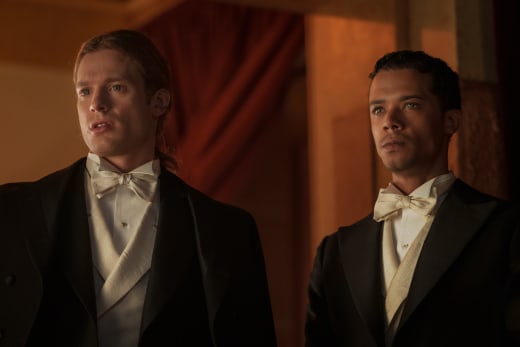 Interview With the Vampire is sticking around at AMC.

The highly anticipated vampire drama has been renewed for a second season ahead of its series debut.

“The scope and breadth of this show, and what Mark and Rolin have delivered, is just stupendous. They have rendered the rich and vibrant world of Anne Rice’s Interview in a wonderful way, and we’re incredibly proud,” said Dan McDermott, president of original programming for AMC Networks and AMC Studios.

From the set build, to production design, costumes and more — no detail was overlooked. This stellar cast deliver powerful performances that emotionally connect us to these characters and their humanity.”

“We look forward to sharing the final product of this extraordinary effort with audiences in just a few short days and are thrilled that this story will continue. This is only the beginning of an entire Universe featuring enthralling stories and characters that capture the spirit of Anne Rice’s amazing work.”

Adds Johnson: “The opportunity to revisit the passionate and shocking world of Louis, Lestat and Claudia is irresistible. We will happily walk through the doorway that AMC has so kindly opened for us and deliver a season two that takes full advantage of the wonders bestowed upon us by Anne Rice.”

“All praises be to our fearless network, we shall endeavor not to screw it up.”

Anne Rice’s Vampire Chronicles and The Lives of the Mayfair Witches also have series adaptations in the works at AMC.

Interview With the Vampire Season 1 debuts October 2 on AMC and AMC+.

Your thoughts on the early renewal?

POLL : What are you watching Tonight? – 7th December 2022
Is Bruce Greenwood Leaving ‘The Resident’?
POLL : What did you think of The Winchesters – Reflections?
Taylor Kitsch to Headline American Primeval Limited Series at Netflix
‘The Bachelorette’ alum Tayshia Adams reveals love-life update, how next relationship will be different
Follow us on Facebook
Follow us on Twitter