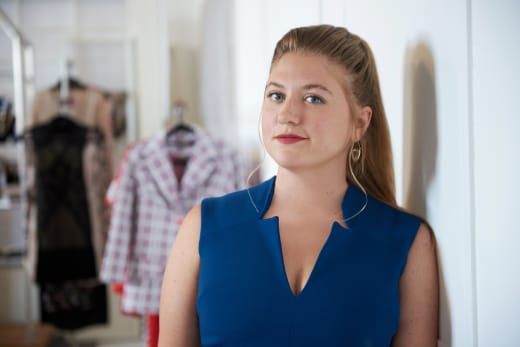 Jaicy Elliot is known for her five-year stint on Grey’s Anatomy as intern Taryn Helm.

Beginning tonight, she’ll be known for her starring role in the delightful Hallmark film Romance in Style.

After watching, you’ll wonder how it’s taken so long to thrust her into the limelight.

Jaicy laughed. “As a respectable little sister, I kind of latched onto that, and I auditioned for a theater play when I was 12. And from then on, I was just acting all the time,” she said.

“I was in different theater groups when I was a kid, and then, when I graduated high school, I was in a semi-professional theater group, and they sort of geared me to go to Paris.”

The idea was that she should try to land a spot at a school for the arts that had everyone eager to join. Still, while she “stole her sister’s dream,” Jaicy thinks the acting bug has always been inside of her.

Jaicy earned her spot in the school and stayed in Paris for five years.

“I acted, and we wrote plays, and we toured, and we did all sorts of theater stuff. And then, when I was done with one of the plays that we had done for a couple years that had gotten quite a bit of traction that is possibly still happening in Paris today, I sort of felt like I needed to do something else.”

When a friend suggested she visit her in Los Angeles, Jaicy thought it was to hang out and maybe do a little waitressing to make extra cash so they could travel the world.

“So that was the idea,” Jaicy said, “but then when I got here, I took another acting class, and then I spent all my money, so I had to make more money, so I extended my trip, and then I started auditioning, and Grey’s was my first real TV job so-“

Yes, Jaicy had many theater credits, but her first on-screen role was on one of the biggest TV shows of all time.

“It’s incredible. It’s surreal. It took me a long time to land in Hollywood and internalize the reality of what was happening. I landed in Hollywood, and I didn’t know anything about acting on TV or about the business of Hollywood.

“I think I’m still learning a lot, but honestly, with a lot of perspective, this perspective that I have now at least, I realize that there was no better experience for me than to just the land in the institution that was Grey’s Anatomy because everyone is still at the top of their game, and I got to learn from the best.”

She said she couldn’t have found a more available cast and crew who embraced her immediately with their availability and kindness. “It was the best version of a school that I could have experienced. I was taught everything.”

Sorry Grey’s Fanatics, but if you were hoping for tidbits about the upcoming season, Jaicy’s lips are sealed. She doesn’t want to do anything that could spoil the excitement of watching the story unfold while the show airs.

But that’s OK! Romance in Style shows Jaicy in an entirely new light. Ella dreams of bringing her plus-size original fashion designs to a large audience, finally offering the majority of women a chance to shine with clothing designed specifically for them.

When her roommate, who works at fashion publication The Look, offers her some work on an upcoming project, Ella meets Derek, the heir to the publishing empire, who becomes an advocate for her vision before stealing her heart.

Jaicy was interested in the role from the moment she got the script. “First of all, doing a Hallmark movie is such an incredible opportunity as an actor to work on your craft. And this was the first time that I was given an opportunity as a lead, so that was very exciting.”

As a character, Ella spoke directly to Jaicy’s life. “I feel close to her in terms of the dialogue she’s trying to start in her own life and also the dialogue that I’m trying to push in my own life. It was kind of like we were kindred spirits.”

While she’s not a fashion designer, Jaicy appreciates fashion. She also understands Ella’s plight, as generations of women have had confidence issues based on what they’ve been told women should look like.

“I went through the movie and had to build parallels between each other. And a thing that I keep coming back to is that we catch her in a moment of true self-empowerment, and she’s decided that this is who she’s going to be and what she’s going to go for at any cost and unapologetically be herself.

“That’s sort of an ideal of what I think we all want to be. But in my life, I realized that it’s a practice. It’s not something you one day wake up with and have for the rest of your life. I think you have to keep looking at your reasons for knowing the things you know about yourself.

“So she was a fun character to be with because she made me look at my own reasons and my own checkmarks of self-worth. I learned a lot from her and think in that way, what I brought of myself to her is that underlying sense of accomplishment that she knows where her confidence comes from, and it’s not just blind belief. It’s earned work.”

When asked if her upbringing offered her a different viewpoint of body acceptance, Jaicy pivoted toward social media. “I think there are two versions of the world. There’s pre-social media and then post-social media. I think anything post-social media is influenced by mass culture that I have a sense comes from America,” she said.

“We’re seeing it change with movies like Romance in Style, but also with influencers and a lot of people who are moving forward with a culture of acceptance and tolerance. But when social media started, it was very much ingrained in past beliefs and of aesthetic standards over everything else.”

She believes that influence goes around the world. “I think we see it over and over again, as people try to break these paradigms that we’ve built on superficial ideas.

“That’s true for the entire world because of social media, but through social media, I think, at its own level, my experience anyways, of Europe, specifically in France, is that it’s no different.

“Physical appearance, and this one beauty standard that we keep headbutting up against this size-zero idea, has always been and is still very much a part of French culture.

“In the movie, Ella says a lot that the average American woman is size 16, and it’s time that we acknowledge that and move forward in our perception of what’s beauty and where it comes from and whether it’s outside or inside and how profound that can be.

“I don’t see that happening in France as much. I think there’s still very much of that stigma. And I’m very happy that I get to be in a movie as a French person, but also just as a woman in the world, trying to do my best.”

Jaicy hopes the movie will air in France and hopefully “move the needle a little bit towards what would be a much kinder and simpler world to live in.”

Toward that end of bringing the world together to appreciate and cherish body types that don’t meet the traditional standards, Romance in Style is a perfect example of how fashion can emphasize the beauty of all women.

The fashions that Ella creates are unique, flattering, and fun. The outfits she designs and wears are fresh and unlike anything we see on ready-to-wear racks, let alone on the runway.

Jaicy chalks it all up to wardrobe designer Quita Alfred, whose creativity flowed effortlessly to define Ella’s look.

Of note were a pair of high-waisted flared jeans, an homage to the ’70s, that both Jaicy and I adore. “First of all, they’re just incredibly comfortable,” Jaicy said. “That’s a gift from Quita, but also, they look great.

“I got to wear them with this top that was a dress that she designed into a top that was sort of like a corset in the front and then a dress in the back. And I got to wear these red heart earrings with it. It was just an all-cute pixie look and felt very Ella Richards.

“She has a brand called Ella Originals, and to me, that was like the core example of what her whole personality was about. It’s very cute and flattering, so it was good.”

There were so many adorable looks, and Jaicy did get to keep a couple of pieces for herself as a gift. “There were so many outfits. I believe there were 21 in the movie, and there were only 14 days of shooting. So it was a lot of changes, but I was able to snag one or two pieces I was very excited about.”

Quita Alfred, who Jaicy said might become a designer herself, nailed Ella’s essence with her work. “She and her team were so quick with ideas, and their creativity had no bounds in terms of what they could do.

“They repeated fabrics throughout the movie because it was important for us to make it feel like we were entering her world and her different perspective on what something could look like.”

Young designers with limited income would reuse fabrics for various styles, which lent an air of authenticity to the movie that is sure to make Jaicy’s lead role memorable.

Jaicy says her first starring role was great. “I was totally blessed with an amazing cast, and the crew was great, and the producer, Joey, and the director, Michael Robinson, we all kind of found each other. It was a really fun set. We had a lot of respect for each other.

“I think from what the movie was built around, we all had a really meaningful conversation from the get-go. We all agreed on how important we felt this was. And also how touched we were all by this subject in very different ways.

“That was carried through the experience of shooting the movie, through tolerance and being excited about being there and doing something that we all related to. It didn’t feel like I was leading anything. We were all just doing it together, and it was a really fun time for everyone.”

Jaicy would also like to put out into the universe that she’d love to do more Hallmark movies. “It was a wonderful experience, so I would love to do that again.”

Tonight, you can find her on Twitter and Instagram, chatting with fans about the movie while simultaneously treating friends and family to a premiere party. Be sure to check in with Jaicy and share your thoughts on Romance in Style!

Romance in Style premieres on Hallmark at 8/7c.