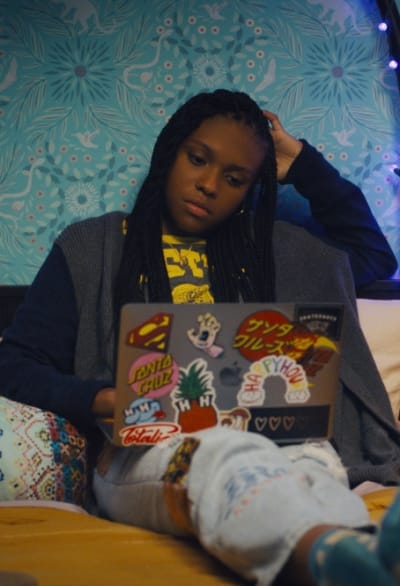 Things are getting spicy!

Even though we’ve learned a lot about Naomi in the first two hours of the series, Naomi Season 1 Episode 3 is definitely the hour that pushes the whole story forward.

And that’s in large part to us spending more time with Zumbado and getting just a tiny peek into what it is he’s after and how it affects Naomi.

Zumbado has been a periphery character up to this point, which is an interesting choice when he’s also the antagonist. There’s only so long you can have the villain hidden in the shadows because the longer they are of no consequence, the less the audience comes to fear them.

But now we have at least the beginnings of a working theory about what Zumbado wants. And that’s thanks to his chats with an old friend.

Zumbado and Akira have such an odd dynamic, wherein no matter how resistant Akira is to everything Zumbado is saying, he doesn’t get mad at her. We’ve only seen a handful of emotions on the man’s face so far, mostly annoyance and anger.

But when he shuffles through his notebook and crosses Akira’s name off his list, there’s a flash of disappointment. You can tell he feels how close he is to achieving his goal, but it remains so far away.

Akira: You really think she’s the key?
Zumbado: You know she is. This is how we take back our planet.

He wants to use Naomi to further his own agenda, because as we see throughout the installment, Naomi gives the disk the spark of life that nothing else can. And if the disk is the one thing that will allow them to return to their planet, Zumbado knows Naomi is critical to that mission.

Perhaps, he should be less threatening and more helpful to the young girls, but that’s neither here nor there right now.

The thing about Naomi is everyone appears to be waiting for her to be ready. But ready for what is the question.

To know Naomi, as we are slowly doing, is to see that she isn’t a person that sits back and waits. She is a doer, and she has not a patience bone in her body.

Dee isn’t wrong when he implores her to bide her time because trying to control powers you didn’t even know you possessed a few days ago isn’t the same as learning how to ride a bike.

Dee: It’s natural to want answers. But you’re not going to get them from Zumbado. It’s best you leave it only.
Naomi: I can handle it.
Dee: Yes, one day. Having powers doesn’t mean that you’re ready to use them. It takes time. Patience.

Dee had her jump off that bridge to show her that she could and get her to believe what he was saying. But now comes the hard part of slowing things down, learning what you’re capable of, and working toward maximizing its full potential.

Again, the show excels in balancing the science-fiction and the everyday, with Naomi desperately trying to learn more about the disk and mixing it in with a grounding and realization that your parents aren’t your friends.

On the science-fiction front, the whole hunt for the disk was wild and crazy and so dangerous on every level. Going anywhere near Zumbado is a gamble, and stealing from right under his nose? That’s insanity.

Of course, getting the disk was way too good to be true because Zumbado is a mile ahead of Naomi. He’s writing the book that Naomi doesn’t even know she is reading, though meeting up with Adam wouldn’t be something Zumbado would be able to plan for.

One major question that nagged me throughout the hour was just where Dee fits into everything because he doesn’t seem to know anything. He doesn’t know about the buzzing, nor does he know about the disk, and it’s like, okay well, who exactly is Dee?

And is there any connection between Dee and Zumbado? Or they’re just two aliens chilling in the same town, at the same time, not knowing each other, yet connected to the same teenage girl.

I’m not buying the coincidence.

But back to the disk, once Adam lets her know that her disk was a fraud, that should have clued Naomi into how far in over her head she was. It doesn’t, because Naomi is going to Naomi, and I do appreciate that no matter what is happening around her, she’s never content to stop learning.

It’s what will eventually make her such a special superhero because it’s hard to believe she will ever not be looking to expand and grow not only as a person but as a helper as well.

I’ve been suspicious of Greg and Jen from the start, and those suspicions were confirmed in the final minutes of a speedy episode when they came clean to their daughter about a secret they had been keeping.

I like that Naomi was ready to tell her parents the truth because it was refreshing to see someone go through a life-changing experience and not try to hide it from the most important people in their life.

It’s understandable why she would be quieter at first and only confide in her best friend, but it was getting to a point where she would no longer be able to continue researching and searching without lying to her parents on a loop.

So, Naomi deciding that she had to be honest was nice. It was shocking to see her parents confess their secrets early in the season. It wouldn’t have been at all surprising for the show to drag out the parent’s shadiness until the finale, but Naomi isn’t trying to be like other superhero shows, and that’s what makes it so much fun.

Greg straight-up telling Naomi that the military is hunting the aliens will be a bigger deal, but here it’s just used as a way to show us that Greg and Jen are trying to be upfront with their daughter when things are changing all around them.

Now, how much Greg and Jen knew about what Naomi had been up to isn’t clear. But considering the special ops going after Adam and Naomi suddenly acting out of character, they must have figured it was time to let her in on her truth.

Neither parent was shocked to see her light up that large disk on the forest floor, and now we’re left to ponder just how she got there, how her parents found her, and what else they know about the daughter they raised.

Yeah, guys, it was one hell of an hour.

That was a lot of fun, as I’ve come to expect from Naomi!

Let me know in the comments where you see the story headed next and what you think about the cliffhanger ending!

Don’t forget to watch Naomi online via TV Fanatic so you stay caught up!