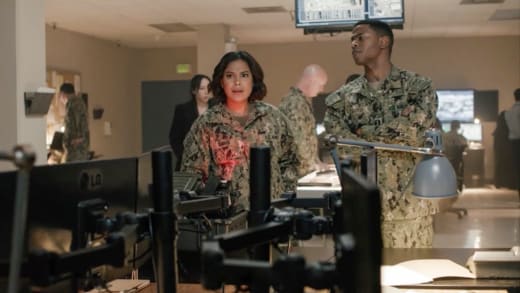 Can we get that SEAL Team Season 6 renewal right now, please?

SEAL Team Season 5 Episode 14 was a pulse-pounding hour that started by wrapping up many plots, but ended with one of the most shocking cliffhangers I’ve ever seen.

So much happened, and it’s hard not to think that a potential SEAL Team Season 6 will look like a very different show.

If you watch SEAL Team online, you know the series takes big narrative risks, but damn, the final scenes were brutal.

Before we get into that, we need to speak about how the team landed on their most harrowing mission to date.

The tension in Venezuela was resolved too quickly, sending our gang back to U.S. soil to make some strides in their personal lives.

In essence, the first half of “All Bravo Stations” played out like a series finale, resolving some of the biggest conflicts from the series.

Jason’s storyline played out better than expected, finally understanding the true extent of what a TBI could mean for his life.

It was nice that he finally reached out to Emma to apologize for his actions. Emma was clearly going into the meeting expecting her father to be the same as she last saw him.

There was beautiful and much-needed progression here, and now that Jason has the closure he needed from Alana, he is truly ready to move on with his life.

Emma herself is charting a very different course than her parents did, something that irked Jason earlier on SEAL Team Season 5.

But Jason has clearly realized the most important aspect of any family is that people are happy and healthy.

Hopefully, Emma continues to pop in here and here on SEAL Team Season 6, but there was a sense of finality with this resolution.

Jason admitting his feelings for Mandy was also another huge moment. Their relationship has been one of the strong points of the series of late.

I did laugh at Mandy’s shock at Jason finding her. Mandy likes to be in the wind, only appearing in people’s lives as and when she wants, so Jason showing up on her porch clearly took the wind out of her.

You could tell she was conflicted about giving Jason the time of day after everything that happened between them.

I was skeptical of the decision to bring Jessica Paré back in a recurring role. She was such a massive part of the show’s early success, and I wanted her as a series regular.

But the writers have managed to nestle Mandy into the storylines in a way that feels natural when you consider the character is no longer in the same line of work.

My hope is that Mandy and Jason get to have a proper shot at a relationship, but you never know with this show.

Clay’s admission that he was leaving the team was not surprising. His priorities have changed since becoming a father, and Sonny’s fateful act almost got the two of them killed.

Sonny basically begging for forgiveness was surprising because it’s not a typical Sonny move. He likes to crack jokes instead of apologizing, but he truly felt badly for his actions in Venezuela.

Clay accepting his apology at that moment would have been too easy in my book, and thankfully, you could still see that Clay was hurt by Sonny’s actions.

Stella was blindsided by Sonny offering the minivan, but I’m glad they didn’t accept it.

It seemed like Sonny was closing the door on being a father to his daughter, but the best next step would be for him to work on his relationship with Hannah.

It’s obvious they can’t be in a romantic relationship, but they need to work on their communication if they plan on co-parenting their daughter.

I knew Davis was going to face some pushback in the department because of her research article, but it was very satisfying to see her being asked to help make the policies fairer for everyone.

It took courage for her to expose the injustice in the first place, and I have no idea what this means for her time assisting our favorite characters.

Davis is one of the smartest people on TV, regularly picking up on things before anyone else.

The love interests uniting at the end of the episode to celebrate as their significant others were being obliterated while deployed was downright traumatizing.

The preview confirmed that a car would be in flames, and it was obvious it would be the one with Sonny and Clay.

The desperate battle for survival was harrowing. Seriously, we don’t know who lives and who dies, and something tells me we could lose multiple people on SEAL Team Season 6.

If Clay was leaving the team, anyway, a near-death experience could be what he needed to say he would never be back.

But then again, maybe Max Thieriot will be leaving the show entirely. He’s working on a new drama for CBS.

Losing Clay would be a huge blow to the series, but we also have people like Sonny, Jason, and Ray to consider.

The fact that it was an orchestrated ambush will probably leave the survivors seeking revenge if the series returns.

“All Bravo Stations” was a shocking conclusion to one of my favorite seasons yet. There’s truly no telling where the show will go next.

Who do you think will and die?

What do you think will become of Bravo Team?