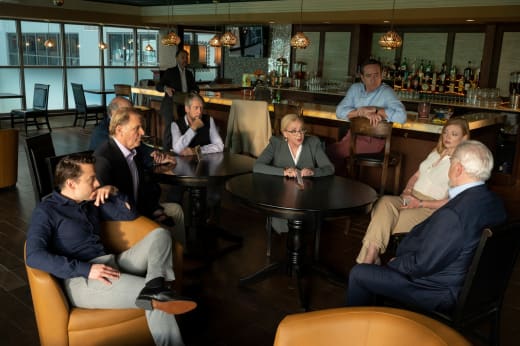 The shit has hit the fan, and while Kendall scrambles to put a team together to support him after his bombshell move against Logan, Logan tries to rally the troops in opposition.

Succession Season 3 Episode 1 proves that neither man has undivided loyalty and that what they do have is attributed to their place in the pecking order.

At one point, Logan tells his crew, which includes everyone but Greg, that they can’t have food because it’s crunch time. They’re flying on adrenaline and saliva.

That hungry Karl decides he needs a sandwich regardless shows the difficulties of standing beside Logan. Most of them do not have a complete understanding of what went down, what evidence Kendall was referencing, or how in the hell they can plan a successful counterattack without it.

It’s Kendall who is cruising on adrenaline.

He’s on top of the world, sure that he can pull off the coup of the century. Yet, he is humble enough to realize before going before the world; he needed to decompress and sink into a bath — even if he was fully clothed and there was no water. It’s the effort that counts.

Because Ken was prepared, he had the jump on Logan and his crew. He started assembling a team to support his efforts before Logan had even found a place to hang his hat. That Logan chose to hang it in Sarajevo doesn’t inspire confidence in any of them.

Kendall is practically giddy through the entire process, playfully calling Frank, Shiv, and even trying for Gerri in an attempt to lure them to his side.

It’s too early in the game to know if his efforts will work, but his method sure outplays Logan’s.

Logan can’t get out of his own way, so it’s not a surprise that he’s not exactly optimistic. And since he knows the weight of Kendall’s case is fact, being discovered and called out nationally by his son is weighing on his mind, too.

But when you’ve got everything to lose, why would you turn on those who you’re counting on to help?

Roman: Dad? Want me to ride with ya?
Logan: You wanna suck my dick?
Roman: Is what he said to his son as the sexual assault allegations poured in.

He’s always a surly guy, but a little humility after the bomb Kendall lobbed his way would do him a world of good. But Logan isn’t a humble guy. That’s why he’s in this mess in the first place.

But Logan didn’t raise humble kids, either. They know how to manipulate their old man, and since everyone has been vying for pole position to take over Waystar/Royco, they’re all trying to use their situation to their advantage.

Roman is so good at blowing smoke out of his ass. His entire diatribe about dragging Kendall down was a performance piece for Logan.

Everyone thinks that if they get close to the top, they can run things better than Logan. It’s likely they all have plans to pull a Logan if they ascend the ranks instead of allowing Logan to pull the strings.

Nobody in their right mind would want to be attached to Logan right now if power wasn’t on the table, and they didn’t think once there, they could make a play.

Logan has no idea how tightly bound Roman and Gerri are, but they could make something of her ascension to CEO as a team. They’re a formidable enough duo to take on Kendall successfully.

Shiv shouldn’t have ever been in consideration for the CEO position. She was only there because Logan and Kendall fell out. Or, Logan pushed Kendall to a breaking point, and Kendall did break under pressure well before he decided to take on his father.

But she was asked to perform for her chance at CEO, and Kendall got there first. Shiv failed. When she said a change of plans, I couldn’t have been the only one who imagined the next strong woman who would be knocking on Rava’s door would be Shiv.

All these brilliant fuckin’ women, Greg. I must be doing something right.

And Kendall’s choice to surround himself with competent women says a lot about him. He knows he cannot do this alone, unlike Logan, who likes to pretend he can while relying heavily on those he denigrates.

Jeremy Strong’s performance in the premiere is right on. He beautifully showed Kendall’s insecurities and need for approval but also that Ken was so amped that he could carry on without getting it.

Have we ever seen a grin as big as the one Ken flashed after comparing himself to OJ? This war is going to get very ugly, so it’s hard to imagine that Kendall has thought about how to cover himself with regard to the mess in England.

Will Logan hold off long enough to pick up steam before using that juicy tidbit, or will burying Kendall become his sole objective? Who knows?

Nicholas Braun was also delightful as always, as Greg acted a lot more confident in Kendall than he felt. A media man, he is not.

Kendall: Greg. Greg, if I get taken out on other shit, I might need you to take my cultural temperature, OK?
Greg: Uh-huh [thumbs up] Got it. As in, w-w-what, what does that mean?
Kendall: You know, like before I get my media monitoring in place, I might need you to slide the sociopolitical thermometer up the nation’s ass and take a reading, K? I-I’ll get seasick. Just feed me metadata, anything that’s going to move the market on me reputationally, yeah?
Greg: Uh-huh. Uh-huh. Yeah, sure. Media monitoring department over here

After his mother started buying NutriBullets and Kruegerands, believing that Waystar/Royco couldn’t survive the turmoil, he seemed a little more stressed than usual. Will Greg have the balls to stand at Kendall’s side? Who knows?

Karl: So? How you feelin’?
Frank: I’m lookin’ forward to seeing more of the Balkins.

Conversations between Frank and Karl and Roman and Shiv acted as a Greek Chorus, revealing everything that needed to be said but wasn’t. They’re all in deep shit, and nobody knows how long they can carry on with their game faces.

This is the whole Baskin Robbins. Thirty-one flavors of fuck right there.

Logan seemed like a lost, old man by the end of the hour instead of a powerful CEO. He’s stepping back. The President has distanced himself. The best attorney available has aligned with Kendall. And still, he’s doing his best to push away those at his side.

On his part, Brian Cox is showing Logan’s vulnerabilities as brilliantly as Strong is portraying Kendall’s need for approval. Cox takes Logan from angry rants to soft-spoken reflection with aplomb, and it’s clear that the Emmy Awards will be alight with nominations once again.

Succession Season 3 bolted out of the gate, and we expect the season to stay out in front of the Sunday ratings’ race.

What did you think of the premiere?

Who are you backing in this race for the top?

Will Shiv bet on Logan or Kendall?

Are Gerri and Roman going to make the most of her new role?

How long will it be before Kendall loses his adrenaline rush and faces what his move unleashed?

Drop into the comments and let us know your thoughts. And of course, check out the recap by clicking the link at the top of the article, and see what Succession quotes we captured for your reading pleasure.

Saved by the Bell – Season 2 – Open Discussion + Poll
Invasion – Episode 1.09 – Full of Stars – Press Release
Zack Snyder’s ‘Planet of the Dead’ on Netflix: Everything We Know So Far
‘Dancing With the Stars’: Who Should Host Next Season? (POLL)
‘Longmire’ Could Soon Be Leaving Netflix Soon, Here’s Why
Follow us on Facebook
Follow us on Twitter