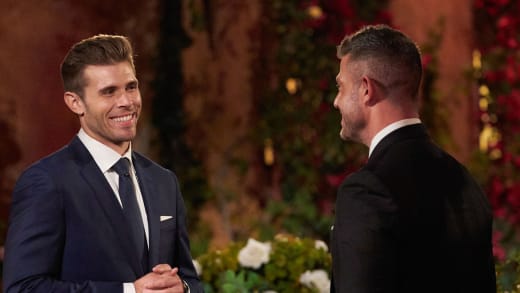 Here’s hoping Zach Shallcross finds love because the teaser at the end of The Bachelor Season 27 Episode 1 certainly hinted at an overdramatic finale.

The Bachelor Season 27 premiere wasn’t the best season opener, but it was far from the worst. It successfully restarted Zach’s journey in the wake of his turbulent The Bachelorette Season 19 journey.

If you watch The Bachelorette online, you know Zach’s journey with Rachel didn’t lead to happiness, and he doesn’t want to tread the same water as the franchise’s lead.

From the jump, it was apparent he had his eye on plenty of the women, but I can’t even begin to imagine how he must have felt while trying to be fair to all of the women.

You need to make a big impression that first night because of the enormous cast cull that is the rose ceremony.

You almost feel like the producers are setting them up for disaster. Sure, there has to be a certain level of entertainment to keep viewers invested, but subtle changes would help the show’s longevity.

The women Zach sent home didn’t get much screen time because they were mainly on the periphery of the premiere.

If there was one thing I’d change about the format, it would be no one would go home on the first night.

It’d be far more satisfying watching Zach nurture some of these relationships before deciding which of the women he was interested in pursuing a relationship with.

Madison was a bit of a red flag from the beginning. There’s no denying it.

Her personality overshadowed many of her fellow contestants’ time with him; honestly, her actions were a bit much.

For that reason alone, it wasn’t much of a surprise that Zach sent her home ahead of the first rose ceremony.

Then again, maybe she’s a casualty of the format in that you have to make your mark on night one, or you risk getting the pink slip.

Reality TV thrives on drama, and a part of me figured Madison would be around for a good chunk of the season because of her unpredictable nature.

If you watch The Bachelor online, you know that people do strange things on the first night and become fan favorites when the jitters disappear.

It can’t be easy having cameras watching your every move as you try to get close to someone with the potential to date 29 other women.

Truthfully, Zach knew Madison had to go because if she’s this clingy on the first night, who’s to say that won’t intensify, ruining some of his other relationships?

It was a big decision to cut her loose ahead of the rose ceremony because it’s uncommon to happen this early in the season.

Then again, Zach doesn’t want to make the same mistakes with his second chance at love.

Madison’s meltdown was sad, and if she genuinely did give up her life for him, maybe she shouldn’t have been on the show in the first place.

We’ve witnessed stories of people ditching relationships just to get on TV screens, even though they would have to romance someone new.

I know the show wouldn’t be as exciting without people like Madison, but maybe she would have benefited from knowing that she would have more time with Zach if that pesky first-night rose ceremony weren’t a thing.

Zach showcased why he was the best person to lead this season on several occasions throughout the premiere. He’s a gentleman, has excellent manners, and doesn’t mince words.

He was upfront and honest with Madison, which was for the best. I dread to think how she’d have reacted at the rose ceremony if she didn’t get a rose.

Then again, I wouldn’t have minded Madison getting a rose to see Cat’s reaction. I had to rewind when Cat said she would burn the mansion down if she didn’t get a rose.

Cat was one of the women who met Zach before filming began because producers think it’s cute to reveal some women way ahead of filming.

If that’s not favoritism, I don’t know what is, but hey, the network wants a show that gets people talking, and the drama of people meeting Zach months before shone through the premiere.

Anyway. Let’s switch gears a little. Was anyone surprised Greer got the first impression rose on the first night?

She wasn’t fawning over Zach like some other contestants, but she must have made an impression on our lead to get such a prestigious vote of confidence on the first night.

First-impression roses have long been surefire ways to tell who will win the season — or make it very far into the drama.

There have been at least 10 first impression recipients who went on to win the season across Bachelor Nation, so the odds are certainly in their favor.

Me? I don’t see a connection between them, but maybe I’ll be surprised.

We’ve only watched the night one events so far, so once we get into the dates and such, it should be easier to tell where this season is going.

Either way, Zach proved the naysayers wrong on night one. There were some concerns about him leading the show, but he has a great personality and a lot of heart.

What did you think of Madison’s antics? Did you expect her to get let go so soon?

Do you think Greer and Zach have a connection, or are you not convinced?

Let’s play a game. Choose who you think will win Zach’s heart this season.

My pick, based on the premiere alone, is Kaitlyn. That will probably change as the season progresses!

Catch new episodes on Mondays at 8 p.m. on ABC.