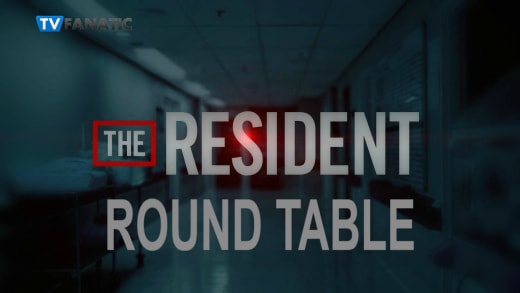 Conrad is back on the market!

Flirty nurses and a possible date were only a few things on display throughout The Resident Season 5 Episode 8. The hour also provided us with an introduction to Dr. DeSoto and had Devon pursuing a new path.

Join Laura Nowak, Meaghan Frey, and Carissa Pavlica as they discuss all the details.

Do YOU think Conrad is ready to start dating, and are you ready for it?

Laura: I’m not ready for Conrad to date again. CoNic was one of my OTPs. While we had the time jump, it’s only been around five episodes for us to process Nic’s death. However, Marion is kind of cute with Conrad and Gigi, and I could warm up to the two of them if they take it slow.

Meaghan: Conrad might be ready to, given that it has been years since Nic’s death, but I’m sure as hell not.

I’m all on board with Conrad getting back out there, but like Laura, I need a few more episodes to process Nic’s death and the death of CoNic. I also really want to see Conrad play the field a bit and have fun dating versus getting into another serious relationship right now.

Carissa: I’m not really worried about it.

It’s not my life. It’s been years, and he deserves to start again. And I deserve to see a romantically happy Conrad. So, yeah. I’m good!

To many, it appears that Billie may harbor feelings for Conrad. Thoughts?

Laura: I wondered that too. It’s borderline between a concerned friend and a developing crush right now.

Meaghan: I was definitely picking up on those vibes. I mentioned earlier this season I was concerned about her and AJ getting together, and I’m even less on board with her and Conrad. I’m still not fully warmed up to Billie, so pairing her with Conrad would bring down his scenes.

Carissa: Who didn’t see that coming? I’m not pleased. I may not be worried about Conrad dating, but I am still not invested in Billie at all, let alone Conrad and Billie as an item. They need to try a lot harder with her.

What did you think about the caretaker burnout storyline? Did you think it was too preachy or heavy-handed?

Laura: It was sad but realistic. I’m glad they told it. So many people don’t think about the pressure on the caregiver.

Meaghan: That was super realistic. I worked in an Assisted Living facility, and I saw that kind of burnout all the time with caretakers moving their loved ones in, especially spouses. It’s utterly heartbreaking to see. It was pretty spot-on in portraying that.

Carissa: I didn’t like the way that Winston handled it. It was atrocious.

Unfortunately, you do not make up a reason for someone to get the equivalent of a spa day to give them a break from their caregiving responsibilities. It would have been the correct approach if they had reached out to available services in the city that could help her.

I understand the woman’s difficulty, but there is a right way to do it, and that wasn’t it.

What’s your impression of Sofia Desoto?

Laura: She’s fun. She’s brutally honest. I could see her working as a love interest for AJ.

Meaghan: To be honest, she didn’t leave a lasting impression on me. I actually just had to go look up who she was because I completely forgot about her. But hey, I’m down with AJ getting a new love interest, so I’d be fine with that if we can work that out!

Carissa: I like her. In fact, I like her far better than Billie in one episode. That’s key, and Sofia got off on the right foot.

I look forward to seeing more of her.

Should Devon get into research and clinical trials?

Laura: I hope he does. It seems like that’s where his passion is, but I hope he stays in the hospital too. He has a wonderful bedside manner with the patients.

Meaghan: I’m actually shocked he hasn’t headed down that path yet. I was sure we were getting that storyline after The Resident Season 4. I’m down to see him take that route. I agree with Laura, though. We can’t lose him at the bedside.

Carissa: Yes! He showed his interest when Jenna Dewan was on the scene. It’s his passion.

I don’t think he’d ever walk away from traditional medicine entirely, but following his passion could lead to great things.

What was your favorite moment, storyline, etc., from the hour? Is there anything else you’d like to address?

Laura: I love how Gigi charmed everyone at Chastain. She is so cute!

As Jasmine mentioned in her review, I really wonder what they’re doing with Irving this season. He’s been so rude and dismissive of so many patients, and I don’t like this change.

Meaghan: I love little Gigi! She is the absolute cutest, and she is one of the best parts of them doing this time jump.

Carissa: Sofia’s introduction and trying to eek some of the ego out of Bell and AJ. That was fun, and AJ and Bell just get more enjoyable together all the time, so let’s see more of it.

Over to you, Resident Fanatics! Do you agree with us? Disagree? Sound off below!

The Resident airs Tuesdays on FOX.