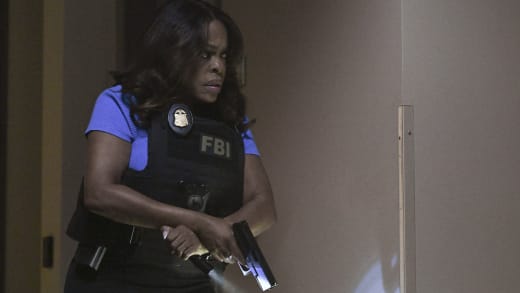 This was a decent premiere.

Their best decision with this series was casting Niecy Nash-Betts in the lead role. She knocks it out of the park, considering how demanding in terms of versatility the role is.

The Rookie: Feds Season 1 Episode 1 introduces us to new and old characters. During the two-episode backdoor pilot on the flagship series The Rookie that introduced us to the story, we met a few of the characters that appear in this show. There are, however, new characters who we got a feel of.

For the most part, nothing comes as a surprise in this episode. Most of the first impressions one would expect in a new show were already impressed on us. If any confirmation is needed, however, the show decided to follow the format of The Rookie, where it utilizes comedy in its procedural narrative.

Of the new characters we meet in this episode is Brendon, Simone’s academy friend who has accompanied her to say goodbye to her former students. Then, we learn that Brendon was a former TV star famous for portraying a cop — a vampire cop.

I feel like with this character, they didn’t dig deep enough. It’s not that hard to write a former actor in Los Angeles. The coincidence that he played a cop on TV and then decided to be an FBI agent is huge, but it makes for an interesting contrast when he must keep both of those separate.

Brendon: Hey, Sophie.
Sophie: Breeen! My favorite client.
Brendon: Ex-Client. I quit acting. You remember? I’m in the FBI now.
Sophie: I know. I saw the news coverage you being all heroic and so did Dylan Santiago.
Brendon: Wait what?
Sophie: He wants you to star in his next Oscar bait indie.
Brendon: You serious?
Sophie: Your dream director. He wants you.

John Nolan showed up in this episode to pick Simone up from the airport. If Nolan and Simone didn’t work for two different law enforcement agencies, they would make great partners. They both have the same level of maturity and life experience, making them a great duo.

Since Nolan joined law enforcement earlier than Simone, it is good for her to have someone on her side as a mentor to encourage her because, as we see, it will not be easy for her.

People in the bureau don’t take her seriously, which is to be expected. She is a middle-aged woman who has led a whole life before deciding to leave everything behind and join the FBI. Like Nolan, it is rational to question her dedication to the job.

Many of the main characters seem to have personal problems.

For Carter, his boss is not giving him an easy time in his pursuit to create a new unit whose reason for creation is unclear. I know they touted that it will be doing things differently, but we have yet to see how different they are.

Because for me, they look like every other FBI task force. They just fly around solving murders. How are they different? Is it because Simone has a network of high school guidance counselors nationwide?

I liked how they didn’t kid themselves with Simone’s ability for action. Her strength is in her words. She can calm people down or get their hearts racing if she so wants.

It’s not clear yet who her partner will be, but I hope it is Brendon; they seem to work well together and are genuinely good friends.

They will make great partners with her mastery of words and his physical agility. Or they will once Brendon stops wearing tight suits like he’s attending a movie premiere. I cannot involuntarily have to see his butt one more time.

During the episode, we got to see more about Simone. Joining the academy and graduating at her age is not a minor feat. For just this reason, we can give her kudos for being tough. She is not only tough but also sensitive.

She knows how to handle people.

She also knows how to get the job done without breaking any laws. Circumnavigating the law is not so black and white, but her motivations are in the right place. I hope she doesn’t exploit this for selfish purposes.

Oh, and we also saw Smitty among the cops in Mr. Kennard’s house. He is a fan of vampire cop! How famous is this guy?

As I mentioned before, everyone has some personal problem challenging them.

For Brendon, he can’t seem to escape his past life. From the constant run-ins with fans who genuinely like him or sexually objectify him to the calls from his manager from the industry, he is finding it tough to leave his past behind.

For Simone, it’s her age, race, and gender. Due to these three things, people don’t take her seriously, and she must prove herself at every turn.

Nolan: You set the bar pretty high last time you were here. Question is, will the bureau give you credit for it or are they gonna make you prove yourself all over again?
Simone: Garza will. I think. As a black woman, there’s no resting. You gotta arm up every day and prove you belong.

There is also the problem of her father.

Like many people, Cutty’s experience with law enforcement is not a story he likes remembering. Simone becoming an agent is a constant reminder of this. However, he knows she needs him, especially in a new city.

Them making up and agreeing to some ground rules was honestly quite sweet to watch.

Cutty: Two ground rules. One, that badge and that gun must be taken off before you enter. Because in my house, you’re my daughter. Not an FBI agent.
Simone: Okay. And what’s the second rule?
Cutty: Bring home dinner once a week. Local restaurants only.

Getting into the unit is on a probationary basis which is something else she must overcome. The unit itself is also under attack. These two are the biggest stakes in the show.

Simone makes friends easily. She has made quite a few in the LAPD. Two showed up for her, and I hope we have more crossovers in the coming episodes as we get used to the new characters in Feds.

The case they were working on this episode also left something to be desired, which is why I haven’t mentioned it thus far. It lacked the thrill and surprise we associate with The Rookie Universe.

Generally, some things felt redundant, especially about Simone. I hope the later episodes will establish Feds as something by itself and not rely on the good sentiments we hold for the characters from the mothership.

I know that Simone is queer, and another unit member is queer too, but I hope this show doesn’t let its fans down. I hope it undoes the sin of its predecessor, which tokenized its queer character, to only kill him off on The Rookie Season 4 Episode 1.

I hope they naturally explore this aspect of Simone.

Are you sold on this show, or do you need a few more episodes to decide? Let us know in the comments below.

You can always watch The Rookie: Feds online on TV Fanatic to aid your decision or relive some of the episode’s best moments.