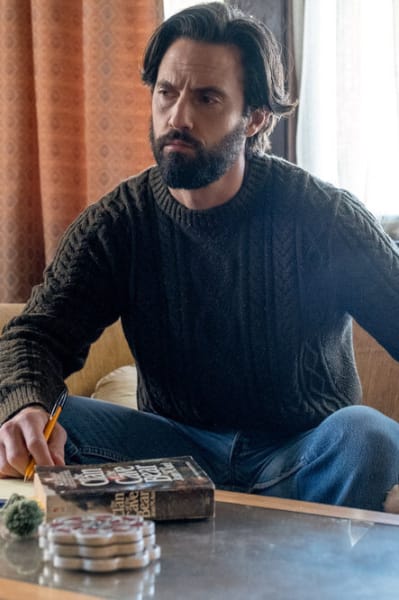 One of the hardest things anyone can ever go through is losing a parent, and it’s doubly difficult if you find out too late that you weren’t part of their life.

This Is Us Season 6 Episode 4 focused exclusively on Jack’s journey to Ohio for the funeral and everything he learned.

It was moving and emotional, but how did this story fit into the final season’s overall theme?

Jack insisted on taking this journey himself, but ultimately, he needed his family.

Maybe that was the point of this painful trip down memory lane. As Jack said in his rambling, not-quite-memorial-like eulogy, his wife and kids gave him a new home just like Mike and Debby gave his mother one.

Rebecca showed up with the kids at just the right moment, giving Jack the strength to continue his eulogy. It was as much a tribute to his new family as it was to the mother he never knew.

One of the overarching themes of the season, if not the entire series, seems to be that families are imperfect, but they do their best for each other, and that love transcends death.

I couldn’t help thinking that it would be only a few short years before Jack was the one who was gone too soon. He made more of an effort to be part of his kids’ lives, but they didn’t fully know him either.

After all, Kevin idealizes Jack to this day, holding himself to an impossible standard as a father, and Jack isn’t here to straighten him out about that.

Jack: I can’t remember my mom smiling a lot. She was always on high alert around my dad.
Mike: Right. Well, you were her hero. You got her out of there. And there was nothing she looked forward to more than your Sunday night calls.
Jack: I’m gonna call it a night. I didn’t know anything about her or her life. Thanks for the beer and the photographs.

But this was Jack’s story, and I guess it was meant to give him closure with his relationship with his mother. But instead, it hammered home how little he knew about her life.

Throughout the hour, he kept reiterating that point.

There were a ton of emotional scenes, as you’d expect when there’s a funeral, but one of the strongest was when Mike invited Jack to sit and toast to his mother with them.

Everyone else was sharing stories about Marilyn, and Jack had to sit there, nursing his drink with no stories to tell except for that time when he was a little boy, and she hid his broken sled so his father wouldn’t find out about it.

Those close-ups of Jack and his drink said it all. He wasn’t part of Marilyn’s family anymore. He was her son, but he was the outsider looking in.

Camryn Manheim’s Debby was so protective of Marilyn’s memory and so disappointed that Jack had stayed away all these years that if she hadn’t made it clear she was Marilyn’s cousin, I would have assumed that they were lovers.

She was a strong, assertive woman whose way of protecting Marilyn’s memory often came across as blunt and uncaring, but in the end, she bonded with Jack and the kids.

Mike was also an interesting person. He was the stereotypical Ohio biker bar dude, except he was anything but.

Mike’s story of how he met Marilyn was cute, and he loved her and made her happy. It was parallel to Miguel and Rebecca’s love story in some ways.

Like Rebecca, Marilyn had been married before to a very different type of man. Of course, Marilyn’s first marriage wasn’t happy, while Rebecca would have still been with Jack if he’d survived the fire.

But both women managed to pick up the pieces of their lives and find joy with a new partner even though it wasn’t what they’d planned.

Although this was a moving story, it felt out of place on This Is Us.

Jack’s past was interesting, but his relationship with his mother and these new people didn’t do enough to carry the hour.

That was especially frustrating because this is the last season of This Is Us, so there’s no time for episodes that don’t lead directly to the wrap-up of the series.

All hour long, I expected a surprise flash-forward to Rebecca’s deathbed, somehow tied into the kids’ memories of visiting Ohio after Marilyn’s death.

Also, where was Nicky during Jack’s childhood memories?

The funeral likely took place when Nicky was presumed dead, but he should have been living in the house with Jack and Marilyn. That omission was strange and distracting.

Nevertheless, Jack’s decision to make hot dogs and tomato soup in memory of his mother and his subsequent breakdown were the strongest part of the hour.

There’s always a moment where it hits you that the person you loved is gone forever. Even though Jack’s relationship with Marilyn mainly consisted of brief phone calls in which they told each other nothing of importance, Marilyn’s death still left a hole in his life.

Thank goodness Rebecca had come to Ohio, after all, to be there for Jack when his grief hit him.

Your turn, This Is Us fanatics. Hit that big, blue SHOW COMMENTS button and let us know what you thought of this Jack-centered episode of This Is Us.

You can watch This Is Us online right here on TV Fanatic if you missed the episode.

This Is Us airs on NBC on Tuesdays at 9 PM EST/PST.

Watch The Blacklist Online: Season 9 Episode 21
Andor – First Look Promo + Premiere Date
This Is Us Series Finale Review – Us (6×18)
What’s Coming To Netflix June 2022
‘The Bachelor’ alum Becca Tilley praises girlfriend Hayley Kiyoko for showing her how to be “brave” and “love myself”
Follow us on Facebook
Follow us on Twitter