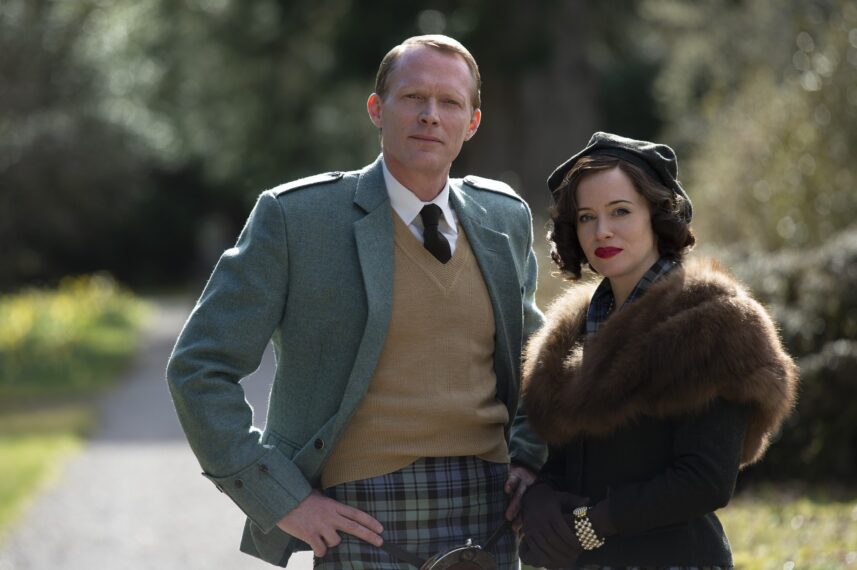 Disgusting. Scum. Slut. Those are just a few of the insults the public hurled at Margaret, the Duchess of Argyll (The Crown’s Claire Foy), during her highly publicized and nasty divorce from Ian Douglas Campbell, the 11th Duke of Argyll (Paul Bettany), in the 1960s.

Teeming with sex, glamour, and reprehensible behavior, A Very British Scandal is a three-part drama based on the true story that chronicles the couple’s tumultuous marriage and its vicious end. As exec producer Delyth Scudamore explains, the pair were “different sides of the same coin. They both loved the outdoors, adventure — and bonking in the grounds of [Ian’s family castle] Inveraray!”

Their passion, however, gave way to pique, and they both had extramarital affairs and treated the other cruelly: She forged a letter from his ex-wife that intimated he wasn’t the father of his sons; he had her banned from Inveraray, the home she renovated with her family money.

Their outrageous war played out in the press, but it was Margaret who was painted as the villain for being unapologetic about her sexuality (nude photos emerged at the divorce trial) and insisting she be treated as an equal to her husband. “She was a woman born in the wrong time,” Scudamore says, adding, “Her story demanded to be told.”

This is an excerpt from TV Guide Magazine’s 2022 Preview issue. For more inside scoop on what’s coming to TV and streaming in the new year, pick up the issue, on newsstands Thursday, January 13.