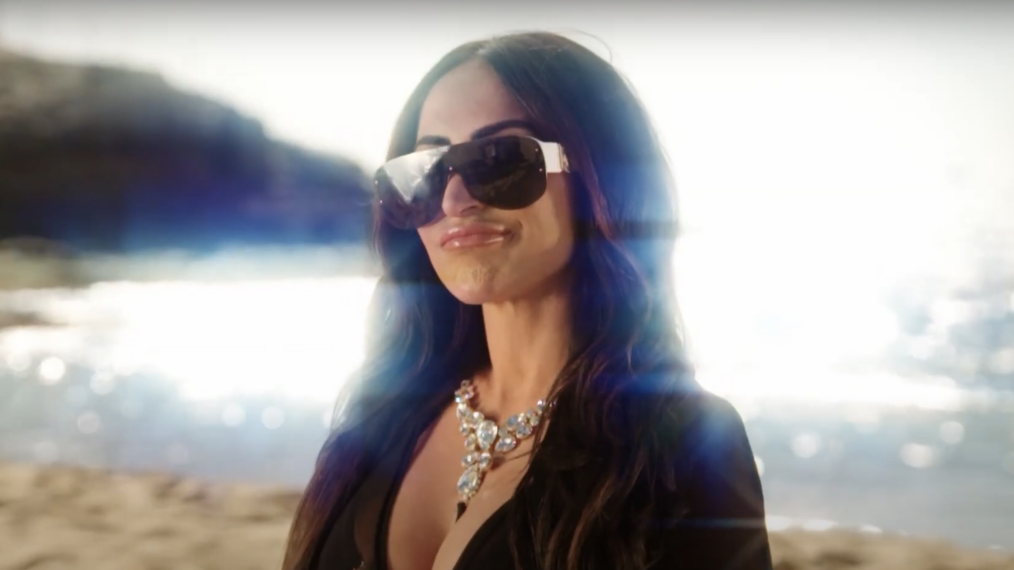 Reality stars from around the globe gather for the first-ever party competition series in Paramount+‘s All Star Shore. And of course, with its name and premise, the show wouldn’t be complete without someone from Jersey Shore. Angelina Pivarnick is representing the MTV staple in the series, debuting Wednesday, June 29, as well as Pauly D as the show’s official narrator.

Naturally, Pivarnick makes a grand entrance in the All Star Shore series premiere, which viewers get an early look at in the TV Insider exclusive clip, above. Pauly D ushers in her arrival as he says, “Most of the all stars have already arrived, but look who the tide just washed in. Late to the party, as always.”

“The old f***ing OG is here, bitches!” Angelina declares as she approaches her fellow competitors, who include stars from past seasons of The Bachelorette/Bachelor in Paradise, Love Is Blind, The Circle Brazil, Geordie Shore, RuPaul’s Drag Race, and more.

“My name’s Angelina. You know where I’m from: The Jersey Shore,” she tells the cameras, as on-brand as ever. “They call me Hurricane Angelina, and there’s a reason for that. I come in, tornado the sh*t out of everything, and then I leave. I’m here to win, and I don’t give a sh*t who I have to shove out of the way for me to get to that. I bring the fun, I bring the mouth, and I bring the drama. What more can you ask from me?”

The “OG” is then tasked with revealing the premise of All Star Shore to all of the players, who weren’t told of the $150,000 prize or the basic outline of the competition before arriving at the Canary Islands villa.

“Welcome to the Canary Islands,” she reads off an envelope. “You are all here to experience an epic vacation in the ultimate shore house. But in order to keep the party going, you’ll need to compete to stay in paradise and avoid being sent to exile. Yeah, we’re f***ed.”

She then lays out the first challenge of the season — a pairing game designed to match players with one teammate they’ll compete with throughout the games. But there’s a plot twist. Check out the above video to see Angelina and her cast mates do their first All Star Shore challenge, and be sure to tune in to the series premiere on June 29.