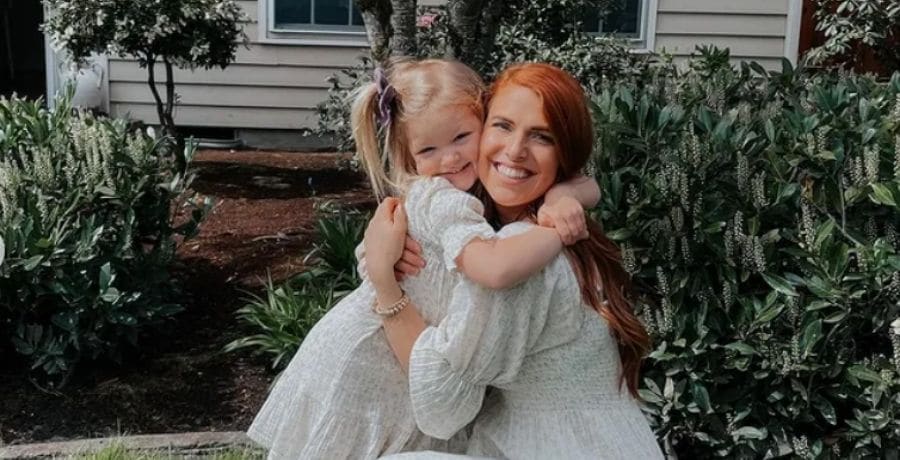 Ember Roloff, the daughter of Little People, Big World stars Jeremy and Audrey, has reached a major milestone. The little girl is growing up quickly and doing all kinds of big things along the way. So, what did Ember do?

Though Jeremy and Audrey stepped out of the TLC spotlight, they are still in the public eye, thanks to social media. Many LPBW fans follow them on social media to keep up with them and their kids, Ember, 4, Bode, 2, and Radley, 6 months.

In a new Instagram post on Thursday, May 26, Audrey shared a series of photos from Ember’s very special day. The proud mom gushed, “Our girl celebrated the last day of preschool today🥰 few things are cuter than a bunch of 4 year olds singing with hand motions on stage😂”

In one snap, proud Ember Roloff proudly shows off a spiral-bound book that she might have made during the school year. It features a picture of her and her name (handwritten by her) on the front cover.

The little girl is wearing a dress with Mary Janes and a big bow in her hair.

In her post, Audrey also included a couple of new family photos, including one outside and one indoors.

In the comments section of Audrey’s post, fans, friends, and family members are gushing over Ember and congratulating her for her big accomplishment.

Someone says, “Ember is preciousssss 🤍 sweet photos.” Another one of Audrey’s followers adds, “Aww soo cute look at that smile 😊 yay Ember 👏congratulations 🎉”

Below, you can see a photo of Ember Roloff with her preschool buddies.

This is a very exciting time in Ember’s life, and fans are eager to see what’s next.

It’s unclear if Ember Roloff will be attending another year of preschool or pre-kindergarten or if she will be heading to kindergarten in the fall. Her birthday is September 10, so she will probably turn five after the school year begins and miss the cut-off. Hopefully, Audrey will update fans on this soon.

So, can you believe that little Ember Roloff is done with preschool? What do you think of all of the photos that Audrey Roloff shared with fans? Tell us in the comments section below, and come back to TV Shows Ace for more news about the Roloffs. And don’t miss new episodes of LPBW on Tuesdays on TLC.

Why Women Kill – Cancelled by Paramount+
When will Seasons 3-4 of ‘Zoey 101’ be on Netflix?
Tia Booth Reveals More Pregnancy Details, Does She Know Gender?
Harley Quinn – Season 3 – Teaser Promo + Premiere Date Announced
Netflix Movie ‘A Tourist’s Guide to Love’: Filming Wrapped and What We Know So Far
Follow us on Facebook
Follow us on Twitter