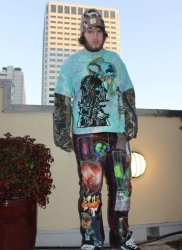 Nick Davis is a writer, multi-instrumentalist, world-traveler, and nerd who needs a beard comb. He moves sporadically back and forth between writing articles, albums, stories and whatever else comes along.

SPOILERS AHEAD FOR THE CIRCLE SEASON 4:

The Circle Season 4 is now complete. Netflix put up the finale this past Wednesday to reveal the winner of the season to be the charismatic Frank Grimsley. Season 4 had an extremely strong opening. Between the energetic cast and the reveal of the Spice Girls in Episode 1, fans were very positive about this season’s roots. The issue is that Season 4 does nothing but lose the interest of most watching as the episodes pass by.

The end result is many saying that Frank may be the worst winner of the show thus far. Does that criticism hold up to scrutiny? Or is Frank receiving unfair judgment?

For starters, let’s make it abundantly clear that none of Frank’s criticisms are about him as a person. Or even him as a player on the show. He’s funny, lively, and he takes advantage of the way this season functions to dominate from end to end. The real issue is with the way The Circle US allows a player like Frank to so easily take the game.

For a game about paranoia, deception, and not knowing who you can trust, Season 4 seems intent on being as friendly as possible. All players who attempt to utilize strategy in this season receive immediate punishment in favor of the players who do little more than make safe moves and remain friends with everyone. Frank was able to easily sweep this season because he never wavered for a moment in his commitment to never stirring up drama from day one.

While that makes for a great friend to have in real life, it also makes for terrible TV. Season 4 lacks any of the emotional drama that makes its reality competitors so compelling (Survivor, Big Brother, Hell’s Kitchen, etc). It’s blatantly apparent from early on in the season that Frank is going to take home the grand prize. And he never falls below the top 3 in the ratings.

Where It Goes From Here

This issue isn’t unique to Season 4. Season 1 garnered a lot of criticism for a similar reason. It seems as though production took note of fans’ concerns and adjusted the format to ensure spicier moments in later seasons. And it shows with Seasons 2 and 3 which are definitely the best that the show has made thus far. So it’s a shame to see it regress a bit with this season. Hopefully, we get more interesting moments in the future, because nobody wants a hugfest competition.

The Circle Season 5 has yet to begin filming. So it is likely that the season won’t arrive on Netflix until 2023. Fall of this year at the earliest. But Netflix has been launching seasons of The Circle internationally. There’s a season out in Brazil and France right now, if you’re really impatient for more of The Circle.