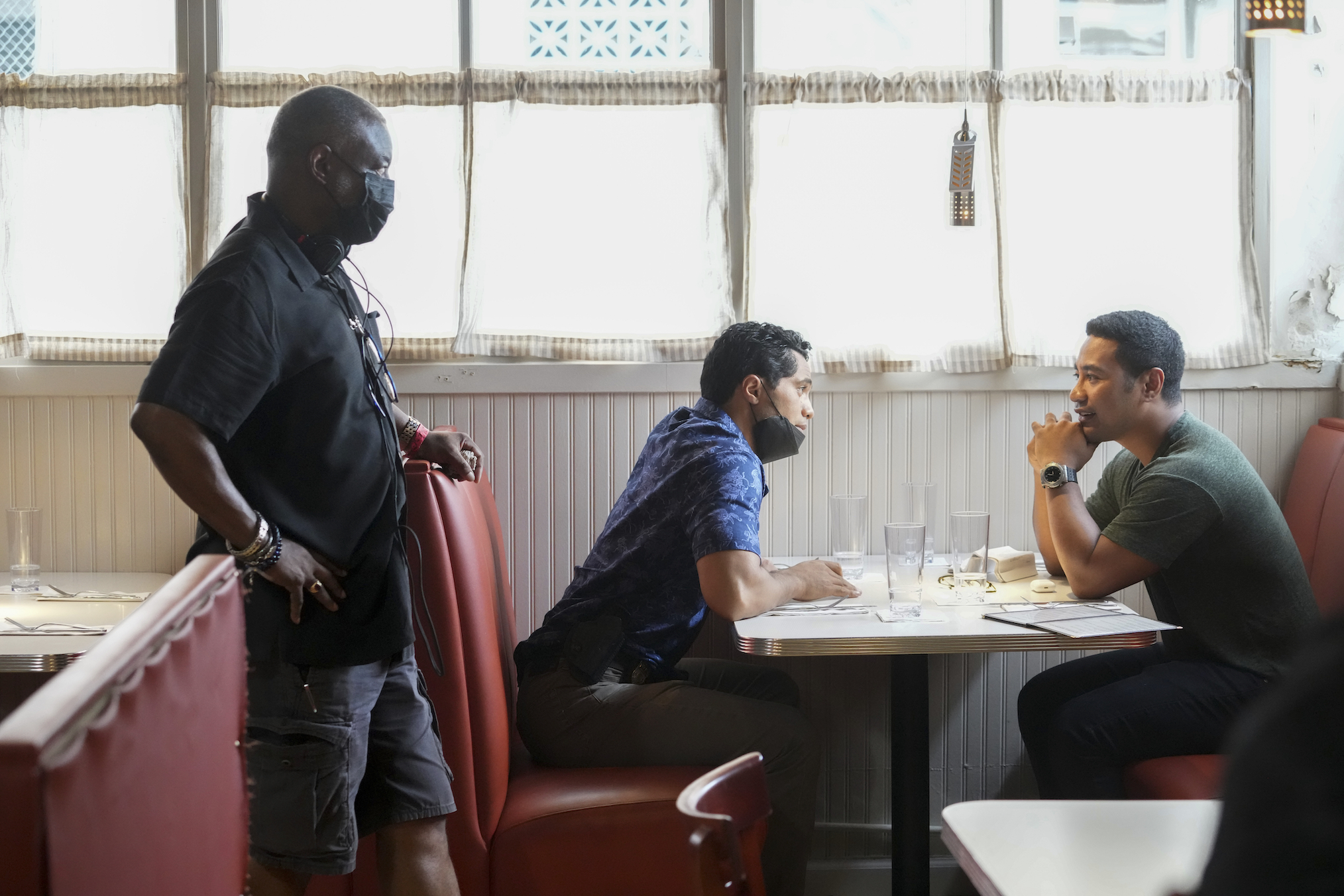 It’s going to be an exciting night of television on CBS on Sunday, January 23, with the AFC Divisional Playoff Game followed by the kick-off of an NCIS: Hawai’i two-parter (the conclusion airs the following evening in the drama’s usual time slot, Monday at 10/9c).

“Isn’t that cool? I love that,” LeVar Burton, who directs “Spies, Part 1,” tells TV Insider of that special Sunday night episode “‘Cause I’m gonna be watching the game so I don’t have to do anything. I don’t even have to change the channel. We’ll just roll right into it.”

For Burton, who’s up for directing another episode, it’s a return to the franchise: He previously directed JAG (which started it all) and 10 episodes of NCIS: New Orleans. (He also guest starred on New Orleans.) Now, he’s gotten a taste of the Vanessa Lachey-led spinoff. “I love the show. The cast is awesome. I think Vanessa’s terrific. It’s great to see a woman heading up one of these shows in this franchise,” he says. “And it’s in Hawai’i. What’s not the like?”

Burton steps behind the camera for an hour that will challenge the team. Their investigation into the mysterious death of a Navy engineer, Joseph Chan, leads to Jane’s mentor and friend, Maggie Shaw (Julie White), who was the last person with whom he met — and she’s been kidnapped! Hawaii Five-0‘s Beulah Koale guest stars as New Zealand Intelligence Service case officer David Sola, with a lead connecting Joseph’s death to a Chinese black op secret agent.

As for the challenges the episode presented for Burton, “I think for me, the biggest [one] was the anxiety of a new cast and a new crew,” he shares. “There’s always the first day of school, ‘how am I gonna fit in?’ sort of feelings that we all experience.” However, he had “all the resources that you need,” which “makes doing the job so much more enjoyable, especially when you’re working with some of the most talented professionals in the industry. I’ve been doing this a long time. And this crew on NCIS: Hawai’i, they’re not only well trained, they are really proud motion picture professionals, and I don’t have higher praise for people in this industry.” With this episode, Burton got to explore something he loves: character development. “In a large measure, that’s what procedurals are all about,” he points out. “The format is locked, right? We know in the first act, we’re gonna have a murder, in the second act, we’re gonna get a red herring, in the third act, we’re gonna get some resolution. But we tune in, I think, to see characters that we grow to love and care about and the development of those characters. I think that’s one of the things that I bring to the table: my instincts as an actor in terms of human behavior.”

And, as the actor and director notes, NCIS: Hawai’i is in its first season, so the stars are still “finding the characters themselves. Part of the excitement for me is that process of discovery where we are all learning together who these people are. That’s always very exciting to be at the beginning of something when it’s in its gestational phase, before it all gets locked in stone. On Star Trek: The Next Generation, we didn’t really find our characters until the third season, in my opinion. So these guys are way ahead of that curve in terms of knowing who they are and what makes them tick.”

The intensity of the episode doesn’t stop, whether it’s a car chase (“I don’t get to do many, so that was pretty exciting to me”) or a conversation between two characters, and keeping that pace is “sometimes not so easy to do,” Burton admits. “But I think that the writers [Yakira Chambers and Ron McGee] did an amazing job with this episode and they gave me everything that I needed in order to bring it home. The success of the episode is in large measure due to the terrific writing.”

For Burton, he was most looking forward to “being in Hawai’i and working,” he admits with a laugh. “Even though I was working, it was still in Hawai’i. I really needed some time in the sun. I thrive in an island environment. Just being in that atmosphere was very healing for me. My soul needed it as much as my body did. The healing power of nature is very real to me, and so I took full advantage of my presence there while we were shooting because it’s special energy over there. It’s one of the most special places on the planet.”