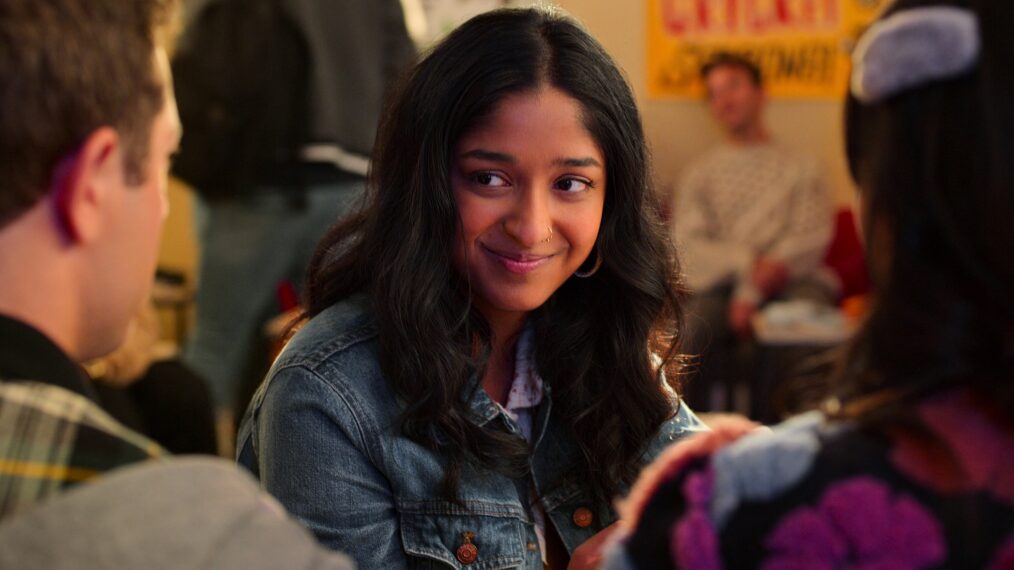 [Warning: The below contains MAJOR spoilers for Never Have I Ever Season 3.]

If you haven’t binged the latest season of Mindy Kaling and Lang Fisher’s addictively bingeable series Never Have I Ever, we’d suggest turning around now as we prepare to take a deep dive into spoiler territory.

As fans know by now, the show chronicles the ups and downs of Devi Vishwakumar’s (Maitreyi Ramakrishnan) day-to-day life as a teen navigating grief and complex romantic relationships with a comedic twist. While Never Have I Ever is just as much about Devi’s friendships, it’s the show’s central love triangle with her longtime crush Paxton Hall-Yoshida (Darren Barnet) and longtime academic rival Ben Gross (Jaren Lewison) that has sucked fans into the drama.

While the season led to some interesting developments, Fisher wants to reassure fans heading into the fourth and final season that despite Devi pursuing “one free boink” with Ben, “it definitely does not signal” the end of the love triangle. “We just finished shooting Season 4,” Fisher teases, adding that when it comes to the love triangle, “it’s alive and well for the entirety of the series.” And while there are plenty of fans rooting for Team Ben and Team Paxton, Fisher doesn’t specify one way or another who Devi might be ending the series with.

When it came to Devi’s Season 3 journey, Fisher says that they wanted her to realize “she’s great and that she’s not this dorky loser that she’s always believed herself to be.” That confidence undoubtedly leads her to Ben’s door in the show’s final moments as well as helps her come to the decision that she’d rather stay put for senior year than attend a fancy private school in another state. “She realizes she really loves her mom and appreciates her,” Fisher says of Devi’s choice. “And I think going forward, after Season 3, we want to really show these two evolving as a family.” So, while there might be some teen drama ahead, Devi and mom Nalini (Poorna Jagannathan) are finally finding some common ground.

Does that mean Devi’s late father and Nalini’s husband Mohan (Sendhil Ramamurthy) will have a less prominent role moving forward as he’s regularly appeared in flashbacks? “He will always have a large presence in our show,” Fisher reassures. “I think like grief in real life, it evolves, and there are moments where you think you’re doing great, and there are moments where it is really painful and it just shows up out of the blue.”

They illustrated that grief during Devi’s first orchestra concert since Mohan’s death, which led to her breakup with Season 3 newbie Des (Anirudh Pisharody). “She will always think about him,” Fisher says of Devi and Mohan, “and he will always play this giant role in her life, but I think where we’re headed in the next season, he’s still a giant part of it, but she’s growing up.” And just as Devi’s growing up, so is Paxton who graduated and is heading off to college in Arizona. Rest assured Paxton fans, Barnet will still play a role in the show despite his new school. “You will see him at college,” Fisher teases. “He’s definitely in the series, and in the season, full-time. It’s not like we send him away and we never see him again.”

Heading into Devi’s senior year, Fisher teases “there is a more confident Devi on the horizon, one who’s not operating from the place of being an underdog, but that doesn’t mean she is level-headed and makes totally rational decisions all the time.” So expect some interesting situations as Devi continues to live through “as many bumps and hijinks as Season 3.”

And expect some hurdles for Ben and Devi as they navigate this next step in their relationship. “The way it ended is definitely going to impact some stuff,” Fisher teases, not wanting to give too much away. “I think you’ll see that our core friend group has its own ups and downs in Season 4 that are unrelated to her showing up at Ben’s house,” Fisher adds. “There’s a bunch of stuff… there is a fun fallout after that happens.”

Consider us intrigued. Stay tuned for more of Never Have I Ever when Season 4 arrives, and relive every hilarious moment so far by rewatching Seasons 1 through 3 now on Netflix.

Never Have I Ever, Season 4 Premiere, TBA, Netflix