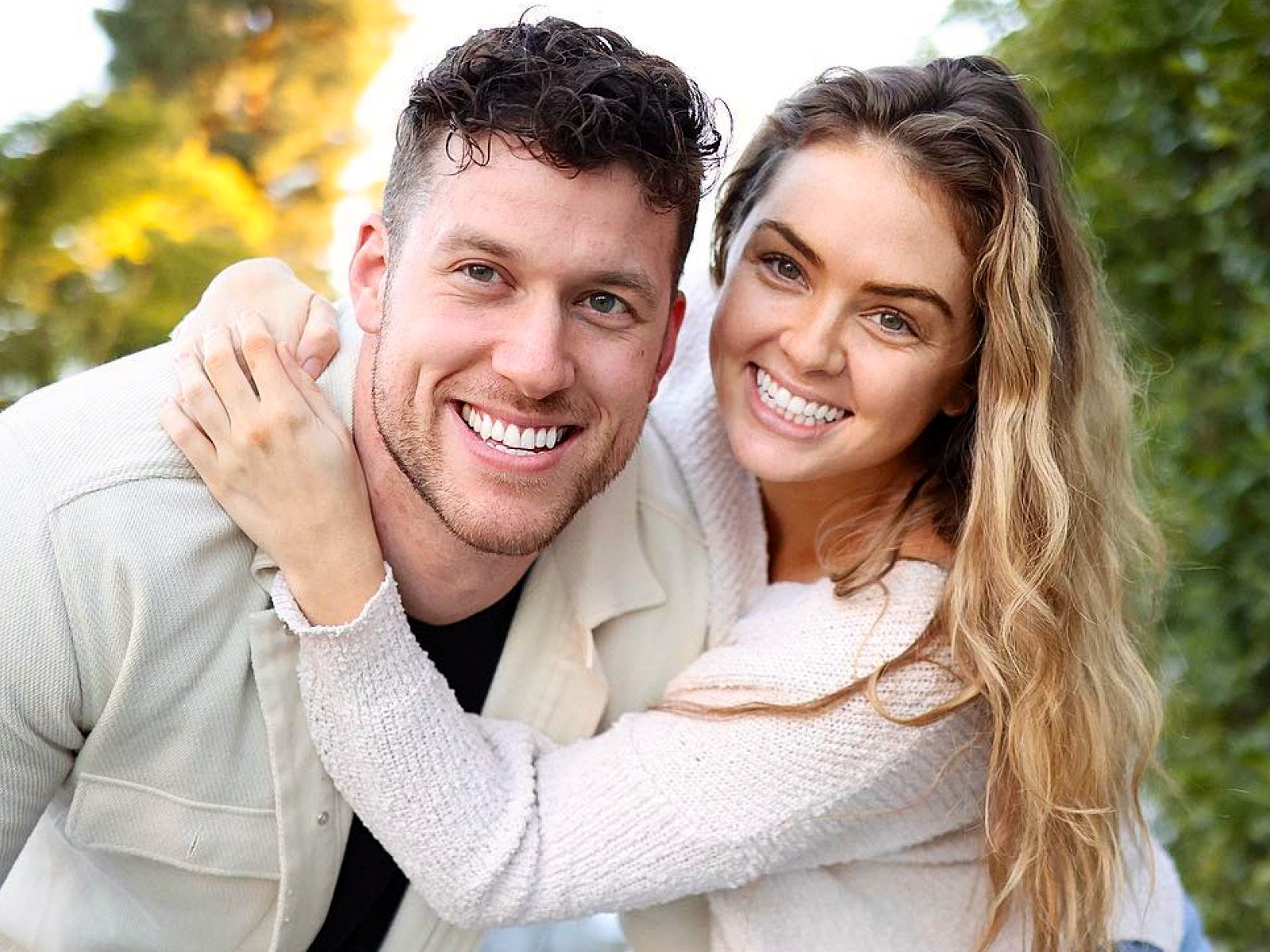 The Bachelor alums Clayton Echard and Susie Evans have revealed why they split and how constant Bachelor Nation backlash definitely played a role in their relationship problems.

Clayton and Susie, who fell in love on The Bachelor’s 26th season, announced their split late last month, but fans began to suspect there was trouble in paradise in August when Clayton — who had been living in Virginia Beach with Susie — revealed he’d be moving to Scottsdale, AZ, and the wedding videographer would be relocating to Los Angeles, CA, so they could both pursue their dreams and hopefully come out stronger on the other end.

During a surprising joint appearance following their breakup on Tuesday’s episode of Kaitlyn Bristowe’s “Off the Vine” podcast, Clayton and Susie explained how they both craved emotional stability in their relationship but couldn’t give that to each other.

“There was so much going on and there were so many factors at play. This wasn’t a traditional relationship. This was a relationship that was broadcast on national television. There was so many moving parts… I wasn’t really sure of what my next step was going to be once the show ended,” Clayton explained.

“I had uprooted myself, I had sold my place. I was like, ‘Okay, I can go wherever,’ but as far as what I ended up doing, am I going to go back to corporate America or am I going to chase my passions?’ There were all [these] unknowns. And I think it put me in a place of instability.”

Clayton said “overwhelming” backlash from the show also contributed to his split from Susie because it caused insecurities within himself, or at least inflamed them.

“And so, what I think ended up happening was I was trying to figure out what my next step was [and] I started questioning who I was because of all the negativity,” said Clayton, who currently coaches children about positive mental health and body image.

Clayton was criticized and slammed for telling all of his Final 3 women that he loved them and for sleeping with both Gabby Windey and Rachel Recchia before his last Fantasy Suite date with Susie, whom he was supposedly the “most in love” with all along.

“I started to believe some of what was being said about me,” Clayton revealed. “And I now look back at it and realize, like, I couldn’t be that stable, secure man that I needed to be to really be able to give my all in a relationship.”

Clayton admitted he was “struggling with self-identity” and had totally lost his identity throughout his journey on The Bachelor, which aired from January through March on ABC.

“I think a lot of the pain I was experiencing made it very challenging for me to just be myself, and in that, I think that’s where a lot of strain was caused in our relationship,” Clayton reasoned.

But Clayton confessed that three months wasn’t enough time for him to fully heal and be his best self for Susie.

“[My healing timeframe] just kept stretching. And then there was more commentary and a new [The Bachelorette] season and more comments were being said and my name was constantly on Twitter,” Clayton recalled.

“I was trying so hard to heal because I knew if I don’t, then how am I supposed to pour into this relationship when I am struggling to know what I truthfully want and where my future is going to go?”

Clayton acknowledged how returning to a corporate job, such as something in medical sales, would have given his relationship more of the stability it needed — but he thought he owed it to himself to push himself and not play it safe.

Susie also apparently supported Clayton in his quest to find meaning and fulfillment in his career and do something that he loves. However, she didn’t think it would make sense to join him in Phoenix considering Clayton was still finding himself.

Clayton said he and Susie were both “hurting,” even though there was “so much love” between them.

“I was like, ‘I want to fight so hard for this relationship, but I feel like the more I fight, the more I tear her down,'” Clayton pointed out.

Clayton said he nearly backed out of doing Kaitlyn’s podcast but Susie gave him the pep talk he needed a couple of hours before the taping.

Susie, audibly choked up and in tears, admitted, “I’m, like, so emotional over here… We just talked for two hours [on the phone] and we were fine. I wasn’t crying or anything. But I think hearing that, yeah, I think a lot of it was just self-identity, and I think that he was looking for stability.”

“And there were times [when] I didn’t provide that as well because I just wasn’t sure,” Susie elaborated.

“I was like, you know, ‘I can’t wait three months. I can’t promise three months,’ or whatever. And I think that’s really hard in a relationship too, when I’m on the other hand like, ‘I need security,’ [or] this or that, and ‘I want to be two whole people.'”

Susie also reiterated how there was “so much pain” in her relationship because of the “hatred” that was thrown at the both of them, individually and as a couple.

Clayton said as he and Susie worked on their relationship and focused on themselves, they could see the tides turning but “the damage was done already,” and that’s “what hurt more than anything.”

“A lot of people saw the happiness online, but we had a lot of dark days… One of us was taking heat for something in our DMs [at any given time] and so we had to be there for each other. But while that was happening, we were also taking heat in our [own] DMs,” Clayton shared.

Clayton said “all of the chatter and noise” was a lot for them, and while fans often say reality TV stars “know what they sign up for” by going on a dating show, Clayton argued, “No, we don’t know what we signed up for.”

Clayton said it was difficult to be in a relationship while trying to mend or rehab his public image that was left “in shambles.”

“[It was tough] to please everybody around you — the show, the fans, your interpersonal relationships, like your loved ones and all that. You’re trying to explain to everybody but you know you can only say so much, because there are some things we can’t talk about,” Clayton said, adding how he almost felt shackles weighing him down.

“I couldn’t just breathe a sigh of relief because I was, like, ‘There’s always something that we’re combating.'”

For instance, Clayton was accused of cheating on Susie early on in their relationship. Susie appeared to have Clayton’s back through the scandal, and he was ultimately able to disprove the allegation with some time and effort.

“The cheating scandal — that was treacherous to our relationship. That really hurt us because it was just one more thing that piled on. And I think if you took any of these things and you just isolated them, I think we would have gotten through it with flying colors,” Clayton reasoned.

“But it was just one thing after the next and then [The Bachelorette 19] came on [in July]. And then it was like, you know, ‘Clayton sucks.'”

Clayton was referring to how Gabby and Rachel’s Night 1 bachelors made fun of him during their limo entrances. A children’s choir even sang about how Clayton sucks.

“That hurts, those comments, because what that does is that then brings the focus back onto us. And then people online are like, ‘Yeah, he does suck,'” Clayton explained.

“Even if it’s all in good fun… no, that still has impact. Because people will take that comment… and tweet about it.”

Susie, who claimed she had developed a pretty thick skin with regards to social media during her former beauty pageant days, also confessed that people called her anti-woman for being with Clayton and she believes that’s “so far” from who she is.

“The backlash from being with him was painful because it had to do with my character. I think that was a new kind of hate I hadn’t experienced,” Susie said, adding, “I think social media played into the struggle of our self-image and questioning how we view ourselves.”

Susie said, like Clayton, she needed to rebuild her self-esteem after The Bachelor because she was “letting some outside voices affect” her.

“It was hard not to go into our breakup post and just rip on people,” Susie joked.

Another problem in Clayton and Susie’s romance was their different communication styles.

Clayton said it sometimes took three hours for the couple to understand each other when it should only take 20 minutes.

When Susie and Clayton announced their breakup in a September 23 statement, they wrote, “We stand in support of each other and hope to see the other go on to find happiness and healing. Although Claysie is no more, we hope that our communities can support us individually as we move forward with love and respect for each other.”

And out of respect for each other, Susie and Clayton chose to keep some of their issues to themselves.

“There are things private to us that we will probably never talk about… and I think that’s healthy and protects our mental health and what we have struggled with… We want to respect each other’s boundaries,” Susie said.

Susie and Clayton broke up at the end of The Bachelor’s 26th season before enjoying the overnight portion of their Fantasy Suite date.

Susie returned to the show and made an appearance at the Final Rose Ceremony, but only to dump the Bachelor and say they weren’t meant to be.

However, Susie reached out to Clayton post-filming seeking some answers, and the pair reconciled and got back together.

By the time the show’s After the Final Rose special aired in March, Susie and Clayton were dating and in love, and then Clayton moved to Virginia Beach to live with Susie.

In July, Clayton told The Virginian-Pilot newspaper he was “disgusted” with how he was portrayed on The Bachelor and “would never, ever” do the show again.

Netflix Canada Added 42 New Movies and TV Shows This Week
Shadow and Bone Season 2: First Look and Premiere Date!
Todd & Julie Chrisley’s Ex DIL Compares Them To Bonnie & Clyde
Robyn Brown Says ‘Put God First,’ Fans Reply ‘He Doesn’t Like You’
Christine Brown Says Two Dates With A Man Is All They Get, Why?
Follow us on Facebook
Follow us on Twitter