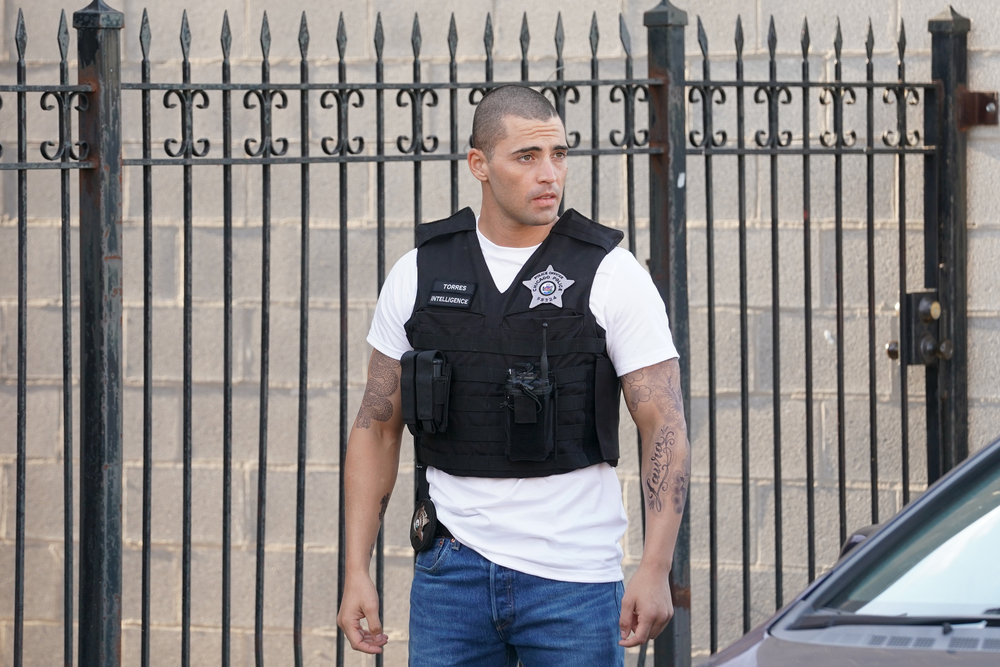 Intelligence is back in action, but Anna’s death has rocked their leader, Hank Voight.

Chicago PD Season 10 kicked off about two weeks after the team’s takedown of Los Temidos, but Voight was struggling to make sense of it all. His grief manifested in action as he went rogue to patrol the streets of Little Village in order to take down anyone who tried to take over the corner and deal. Is he losing it a bit? Yeah. Is it insanity? Definitely. Are we here for it as an audience? Absolutely.

We knew that he was going to take her death hard as it was clear from the beginning that he wanted to keep her safe and give her and her son, Rafa, a better life when it was all over. When that didn’t happen, Voight felt like he failed her.

And his personal crusade against the neighborhood was his way of ensuring that her death wasn’t in vain; that it mattered.

Unfortunately, it wasn’t a sustainable solution. As Upton pointed out, Intelligence simply cannot police one city block when there are so many other issues to focus on. And Voight’s private patrols weren’t exactly “private” as everyone took notice and simply turned the other way hoping that he would eventually come to his senses.

It all culminated in a new drug case that involved a five-year-old boy accidentally overdosing on some heroin cut with fentanyl.

Everyone was adamant that Voight hand the case over to narcotics, but honestly, it seemed like a case Intelligence would’ve tackled regardless of Voight’s involvement in the neighborhood. If the tainted drugs already took the life of one minor, what’s to say they wouldn’t do more damage if the dealer wasn’t stopped early on?

Voight, however, was more determined to get the dealer because of Anna’s death, so it caused him to make some questionable that Upton wasn’t exactly keen on.

And while I can’t blame her for worrying about Voight’s motives, the way she approached the situation wasn’t exactly ideal either. Upton continues to think that she can just waltz in and do whatever she wants without listening to orders, which continues to show her entitlement when it comes to the job. Voight’s actions may have been questionable, but it was Upton’s rebellion against his rules that ultimately almost cost them the case and put lives in danger.

When Voight sent in Torres (new series regular Benjamin Levy Aguilar), a probationary police officer who was on “loan” to them, he truly believed that he was doing the right thing. And I have to believe that no matter what mindset Voight is in, he wouldn’t just play with someone’s life on a hunch. He knows the risks and makes strategic calls. It hurt him to lose Anna because she was a good person, and it doesn’t seem like he wanted any more casualties, especially a budding new cop that has been a great addition to his team. And since it was clear that Enzo was a loose cannon and his actions were unpredictable, I don’t think Voight would’ve taken chances he didn’t believe in.

He wanted to continue letting the situation with Torres and Enzo play out because he trusted that Torres had the skills to get the job done. If Upton had just followed Voight’s call, they would have nabbed him with the drugs in hand and put him behind bars for a very long time.

Instead, she decided she knew better and “got closer” to the situation in a careless manner. When the gate slammed, Enzo got spooked and began shooting at both Torres and the CI. Thankfully, no one was hurt, but it could’ve ended terribly for everyone involved.

They were eventually able to get Enzo, but only because of Voight’s quick thinking, which Upton didn’t agree with, again. Why is she still part of this unit when she clearly doesn’t think Voight is fit enough to run it?

After Upton’s screw-up, she didn’t even have the gall to apologize to Voight. Instead, she turned the tables on him and told him he hasn’t been a very good leader lately. While there may be some truth to what she’s saying, it really wasn’t the right place nor time to bring it up.

And I’m glad Voight shut it all down. He’s realizing that Upton and Halstead have gotten a little too comfortable around him and no longer respect his authority, which can’t happen if this unit is to function seamlessly.

We know Halstead is leaving the series this season, and I think his desire to protect Voight will ultimately lead to his decision to exit the unit. He protected Voight this episode and stood by him, while also acknowledging that he was taking it a bit too far. Being a contrast to Voight is going to take a toll on him personally and will likely be what breaks him. It definitely seemed like Upton was setting the scene for his exit by informing Voight that he was going to drag Halstead down with him unless he leaves first.

In the end, Voight got a wake-up call from the new Chief, Patty (they seem to have a history), who informed him that he’s graciously allowed him to grieve for two weeks, but he really needs Voight to step up to the plate again and save Chicago. In fact, his words were “the whole city is going to hell,” which was rather dramatic, but puts pressure on Voight and the team to do their job. It also promises the backing and support of the new Chief, and it seems like he will help Voight get away with stuff because he knows that he’s the man that will get things done.

The city is better off with him because he’s made this job his entire life. Nothing else matters more to him.

In a full-circle moment, he also informed Voight that he pushed through half a million payment to Rafa, Anna’s son who is now living in Iowa. Voight pulled through in his promise to take care of him.

And while Anna’s name was never mentioned when Intelligence was being honored for their heroics in taking down Los Temidos, they were all very much aware that it wouldn’t be possible without her sacrifice. She didn’t die “for nothing” as she once informed Voight, and that may lessen the blow of her death ever so slightly.

Lastly, we knew Torres was going to join Intelligence permanently, but it wasn’t entirely clear how it was going to happen since he’s still a rookie cop until the Chief personally granted him to Voight’s unit. Voight didn’t seem to have an opinion on it, but we’ll see how Torres factors in once Voight is officially his boss. It’s going to be interesting to see Torres’ story play out since he’s so green, but he’s also a go-getter that has what it takes to succeed. He’s got street smarts, which will come in handy, he knows how to play the game, and he’s not afraid. The only question is—will he mesh with the team?

The series made it clear that season 10 is going to hit reset as Voight’s unit is tasked with getting back to saving the city. And with the Chief telling Voight he’ll keep him on a “long leash” and give him more cash, my guess is that fans who have been waiting for dark Voight to return might get their wish after all. How will that affect Halstead, Upton and the rest of the squad? Only time will tell.

What did you think of the Chicago PD Season 10 premiere? Are you happy that they finally offered some closure following Anna’s death?

Is Bruce Greenwood Leaving ‘The Resident’?
‘George & Tammy’: See George Propose to Tammy in a Sneak Peek (VIDEO)
Watch Sister Wives Online: Season 17 Episode 13
‘Gen V’: All ‘The Boys’ Stars Who Will Appear in the Spinoff
Guillermo Del Toro Pinocchio Making-of Documentary Added to Netflix
Follow us on Facebook
Follow us on Twitter