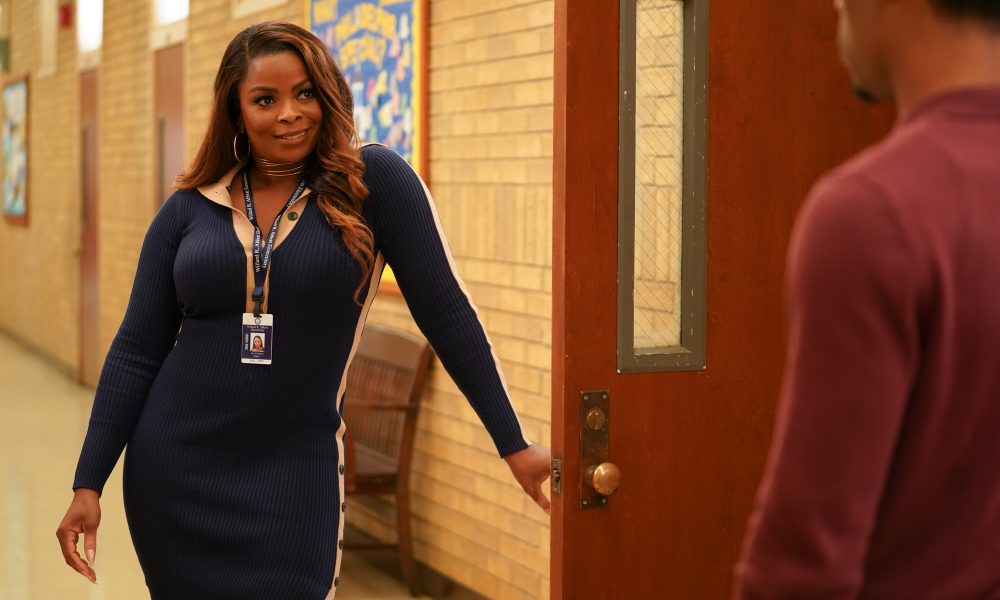 School is back in session.

As our favorite teachers return to Abbott Public School for development day ahead of the students’ first day of school, chaos ensues, particularly for Janine.

Since her breakup with Tariq, she’s been trying to keep it together and pretend like nothing is wrong, but the truth is, everything is wrong.

While she holds it together for the first half of the day, even impressing her colleagues with the strides she’s made and how organized she is, things quickly spiral out of control.

First, Jacob oversees an email from her landlord that says her rent is overdue. She’s facing eviction, but Janine is in denial because she’s determined to be okay. When she dismisses Jacob’s concerns, he tells everyone, including Gregory, who calls her out on it immediately.

From there, things just continue taking a turn for the worse. Gritty, the Philadelphia hockey mascot that Janine managed to book for the first day of school, arrives a week early because she got her days mixed up. She then admits that she hasn’t been paying her bills because she can’t afford them without Tariq’s contributions.

But the last straw is when she gets a boot on her car for unpaid parking tickets. Janine informs the city worker that she hasn’t been paying them because the driving violations belonged to Tariq, which is when she’s hit with the hard truth that if it’s her vehicle, it’s her responsibility. I would think that a teacher like Janine would know that, but I’m also impressed with her desire to force some responsibility onto Tariq. She’s been funding his life for far too long.

Janine eventually breaks, but it’s all for the best because she has a solid support system in her colleagues, especially Barbara and Melissa, who have been there and done that and know that there’s no way to avoid the heartache that comes with a breakup. The only way over is through it, and Janine needs to face the pain and acknowledge that it doesn’t make her any less than.

And, in the long run, it’ll be the best decision she could’ve made because while she was wrong about a lot of things, she wasn’t wrong about the fact that it was the right choice. She outgrew Tariq, and seeing how unfazed he was when he moved out, he didn’t fully appreciate all that she had to offer.

And Gregory? He noticed the new side part. A man doesn’t notice the side part unless he’s smitten.  Of course, audiences already knew that, but it seems like Janine is finally considering him in a new light… when he ends things with Taylor, that is. If he’s even with her anymore.

Barbara and Melissa weren’t interested in participating in Janine’s “wisdom swaps” portion of the mixer, but they imparted their wisdom on their younger colleagues nevertheless. They are Abbott’s very own superheroes!

In addition to helping Janine work through her break-up, Barbara also helped Gregory, a first-year full-time teacher, figure out that the magic of being a teacher is simply doing the best they can. Every teacher can attest to the unattainable goals set by the school districts, but the curriculum, as Barbara pointed out, is a mere suggestion. They are much more than teachers—they are guides, counselors, and mentors. They try their best every year.

After Barbara helped him navigate the first week jitters, Gregory took her advice to heart and did the best with what he had. He braved the school’s creepy basement and dug up an ADA desk for her wheelchair student. And the joy on their faces was well worth it.

Abbott Elementary may be a 20-minute sitcom, but it has so much heart and deals with some of the most difficult realities for teachers, including the lack of funding and being set up to fail. This season, there’s an added effort to be more inclusive. In addition to the wheelchair student, Jacob, who boasts all about the trip he took, took on ASL, which came in handy when he welcomed a deaf student into his classroom.

Melissa, however, was given 10 additional students as a mix of second and third grade. Every teacher is being tasked with new responsibilities and challenges, but since they’re all there because they love their students, they all rise to the occasion every single time.

Elsewhere, Jacob helped cover Janine’s finances with the money for his student loans (and didn’t seem phased because Joey B is getting rid of them anyway), Ava ran a side hustle in the school parking lot because, of course, she did, and Gregory continued to be the funniest character using only his facial expressions.

It’s going to be a good year for these Emmy-award-winning characters… I just know it!

What did you think of the premiere of Abbott Elementary Season 2?