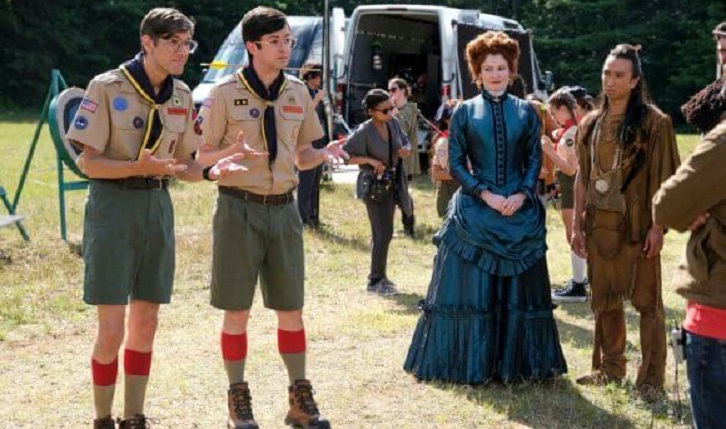 Ghosts continued exploring more of the ghost deaths by revisiting the separate moments when Flower and Pete met their demise on Ghosts Season 2 Episode 7.

Both of their deaths were considered “dumb deaths” by a docu-series producer who approached Jay and Sam about shooting at the Woodstone Manor for their upcoming episode.

I admire how much Sam respects the ghosts and their feelings. When Paula offered them $10,000 to shoot on their property, she didn’t just jump at the opportunity, instead delaying her answer as long as possible until she got the go-ahead from Flower.

Initially, Flower wasn’t on board with being the subject of a documentary because she didn’t want to be made fun of or look dumb. The truth is, she likely wouldn’t remember any of this happening anyway, but her feelings were still valid. Pete, however, urged Flower to see it as a unique opportunity to help Jay and Sam financially.

Of course, it was easy for Pete to look the other way when the focus wasn’t on his death, but when he suddenly became the subject of the docu-series, he was singing a completely different tune. He tried to be okay with it because this was his chance at giving back to Jay and Sam, but reliving the moment and seeing people make fun of such a crucial moment in his life was traumatizing and upsetting. One bad decision cost him everything yet it was nothing more than a joke to everyone working on the production.

I believe Pete was also triggered because it was one of the first times he was forced to confront his premature death. Prior to this moment, he never really thought about it or overanalyzed it, which allowed him to remain his chipper and optimistic self. But when it was shoved in his face, he began doubting the person he always believed himself to be.

A huge downside of being a ghost is that they also hear everything, including people making rude comments at their expense, like Daniel the insufferable actor playing Pete who took himself, and the role, too seriously. As he contemplated what state of mind Pete was in at the time of his death, he suggested that maybe the man he was portraying was a drunk.

At this point, it was an assassination of character as the production wasn’t even dedicated to getting the facts right. Sam couldn’t let this happen, so she brainstormed a way to help Pete out, which included bringing one of his original troops to the Manor so that she could debunk any fictitious stories.

Jennifer was eager to help Pete in any way she could—a clear sign that she respected him as a teacher—and though she informed everyone that he wasn’t drunk at the time of his death, she couldn’t deny that he did something dumb: he handed out the bows and arrows before the safety demonstration because he was too distracted by donut holes.

At this point, Pete remembered for the first time in decades that he took his eye off the prize that morning because he was so upset about a petty and inconsequential disagreement with his wife, Carol, earlier that morning. To be fair, I agree with Pete that a donut hole and a donut are the exact same thing. They’re made of the same properties! Anyway, this is a reminder not to have stupid arguments because you might die and that’s all you’ll remember for the rest of your existence.

When Pete finally acknowledged what led to his death, he was really hard on himself, even going as far as to say that he was a terrible Girl Scout leader. It was devastating to see Pete so hurt by all that unraveled from this production, but by the end of the episode, he was validated in the fact that he was a good leader all along just as he believed. Jennifer knew exactly what to do—word for word—when Jay was accidentally shot with an arrow while trying to get some free food from the catering truck.

For a moment, I truly thought that he would lose consciousness, hit his head and finally be able to see ghosts, but that didn’t happen. It just goes to show you how eager I am for him to be part of the action… officially. The fact that he can’t see them is the running joke, but it would truly switch up the dynamic if he could interact with them.

I’m also going to say that bows and arrows definitely need to be banned from the Woodstone property; They’re simply too dangerous. I know this was technically the work of the ghosts since they saw how hurt Pete was so Thor used his ghost powers to break the camera and force-stop the production. It kind of worked as the team eventually pivoted back to their original idea of telling the story of Flower’s final moments before she got mauled by a bear while trying to hug it under the influence of drugs.

And the best part was that Sam was cast in the role, so she was able to do her justice. Not to mention that Sam knows her personally so she nailed the mannerisms. Flower was all about spreading love and positivity… even to a bear. She was too kind for this world.

I love that we get to see some of the ghosts see their friends’ deaths happen, like Thor, Alberta and Sass standing by and watching Flower’s bad decisions end her life. From the moment she crossed over, didn’t recognize her own dead body as a ghost, and didn’t even realize that she was dead, simply asking the trio if they were at the music festival, they knew the afterlife with her was going to be a trip.

While much of the focus was on Flower and Pete in this episode, Nigel and Isaac had their first lovers’ quarrel following a disagreement about the events of the American Revolution. Considering they are on two opposite teams, it’s probably for the best if they simply never touch upon this topic with each other as they’ll never see eye-to-eye. They both have vastly different memories of how it went down, and that’s fine, but it’s also not worth ruining a present-day relationship over something that is very much in the past.

After Sam informed Isaac that the UK and the US are currently allies and have a “special friendship,” she basically gave them the go-ahead to continue on with their romance as “special friends.”

It’s interesting to see Isaac navigate a relationship with someone so fundamentally different than himself, but it’s also nice to see him make compromises and rethink how he approaches situations now that he cares about someone else in the afterlife.

All in all, a blind pursuit of pastries cost Pete his life, while Flower died doing the most Flower thing she could’ve.

And neither of those deaths is dumb!

What did you think of the episode?

The Game – Episode 2.09 – Fear & Loathing in Las Vegas – Press Release
The Good Doctor Season 6 Episode 11 Review: The Good Boy
‘Dancing With The Stars’ 2023 Tour: See Our Review!
‘Married at First Sight’ star Domynique Kloss reacts to Mac’s mom offering him $50k to quit the show
Law and Order: OC – Episode 3.14 – All in the Game – Press Release
Follow us on Facebook
Follow us on Twitter