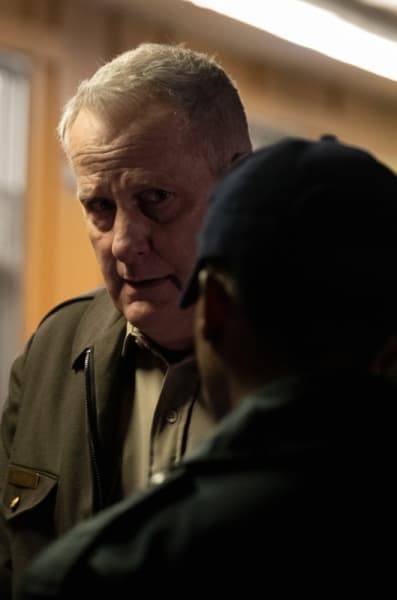 If you’ve never been to a Pittsburgh wedding, you’ve seen a pretty good representation on American Rust Season 1 Episode 2.

As bleak as it sometimes seems in Buell, they do it up when there is a reason to celebrate!

Since we feel that things are going to worsen for these folks before it gets better, letting their hair down couldn’t have come at a better time.

As noted in our review of American Rust Season 1 Episode 1, Chief Del Harris took his first step down a dark road when he hid evidence at a crime scene.

He’s past the point of no return now, so he might as well keep going.

Scooping up the pill off the ground next to Pete’s body and stuffing Billy’s coat away might have been buying Del time to see if things with Billy aren’t what they seem.

Sussing out the truth won’t be easy because the town will be gunning for Billy when this gets out. Billy, though, doesn’t seem worried.

So far, he’s shown he has a good head on his shoulders and is caring and compassionate. He jumped into the water to save Isaac without hesitation. Killing someone doesn’t ring true to what we know about Billy so far.

His innocence is the only thing that makes sense then. It’s the eve of the end of his probation, and lurking outside of the mill after Pete was killed isn’t putting the fear of God into him.

From Del’s perspective, he still sees a kid, not unlike himself, who wouldn’t be able to stop once on the defensive. Del’s going the extra mile by giving Billy money and instructions to destroy evidence. He does this despite Billy’s lie about how his hand got hurt.

Del knows Billy was in the mill, and he knows Billy will be treated with a heavy hand if he comes under suspicion.

Right now, we’re looking at two men as opposites on the same coin. Billy seems oblivious to the consequences of his involvement in Pete’s death, and Del isn’t thinking clearly about the trouble lying in wait for his own involvement.

Billy is also worried about Isaac and thrilled that Lee returned to town. He’s more concerned about others than he is himself, and there’s no way that won’t come back to bite him in the ass.

Billy has good insight into Isaac and made a case to Lee about how her brother has felt in her absence. If we had a chance to know her before she left, maybe it would be easier to forgive her trespasses, but we didn’t.

Maybe the point of Lee’s return is for Billy to have a little happiness before he dives headfirst for what awaits him. But when she leaves, he’ll be alone, she’ll still be married, and he’ll be in the midst of a murder investigation. No matter how you slice it, it doesn’t seem beneficial to Billy at all.

Because while most of the town was at the wedding, Del was tracking down leads. When he didn’t find what he hoped, he almost seemed relieved. No news is good news, I guess.

Del is in such a bad spot. The DA, Sue, is a complete tool and way too high on herself regarding this murder. Sidelining Del didn’t do her any favors, even if the Sheriff seems like a decent guy.

At least they were enjoying themselves a bit when they got their first break in the case.

Del: [looking at a photo] It’s definitely Pete Novick. The question is, who’s the guy with the long hair and a beard?
Steve: Looks like Jesus of Nazareth.
Del: In off-brand sneakers and denim jacket.
Steve: JC Penney Jesus. Of Pennsylvania.

The Pittsburgh-style wedding was almost spot on. There wasn’t enough emphasis on the cookie table, but the general spirit was true.

I explained more about it in my early review of American Rust, so check it out if you’re interested. When you got past Billy and Lee, Grace was the focal point of the wedding festivities.

Virgil: Hey. Whatever you do, do not write Many Happy Returns. Katie Danek’s fat mother just chewed me out for it.
Billy: What’s wrong with Many Happy Returns?
Virgil: Apparently, it’s bad luck to say it at a wedding? You’re only supposed to say it at birthdays and New Year’s, and shit. Phyllis Danek just bit my head off! FATASS WALRUS!
Shonie: What happens if you say it at a wedding?
Virgil: I don’t know, sugarbush. You probably fall in a hole or something.
Shonie: Sugarbush! [grabs him]
Virgil: Titty twist? Don’t be titty twisting me in public!

Virgil never stops trying to stake a claim to his wife, even as his barely legal date gives him twitty twisters and other embarrassments. As much as he wants Grace, whether to dance or screw, when that gal was flirting with another man, Virgil went ballistic.

But Grace never slams the door in his face. She didn’t even pull sex off the table entirely, and it seems like she’d be up for it if he’d just get checked for venereal diseases.

Del is still making a heavy play for Grace, and if she had any idea what he’s doing for her son, she might finally be able to let go of Virgil.

But she sees Lee as trouble for Billy, and if she’s not the best navigator of relationships, she isn’t going to sit idly by while Billy loses his heart to a married woman who left him without a backward glance.

Seeing everyone having a laugh and dancing together is what the American rust belt towns are really about. Sure, there’s a lot of uneasiness after the mill closures, but they’re caring communities who support each other through the good times and bad.

Now we have to wait to find out what JC Penney Jesus has to say about the fateful night in the mill that’s got Isaac so worked up that he wants to get stories straight.

No matter what happens, it seems like we know who will get the shitty side of the stick.

Don’t forget that you can watch American Rust online and be here as the season continues as we try to uncover the mysteries boiling under Buell’s surface.