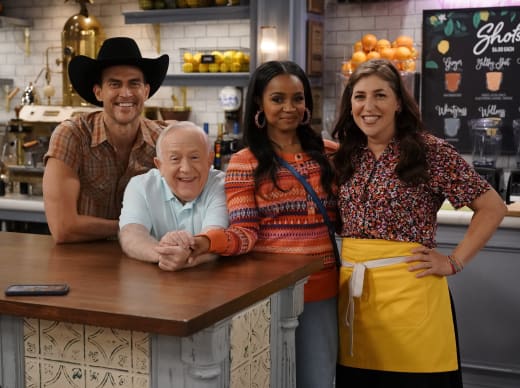 Call Me Kat is a sleeper hit for FOX, and their 3rd season may end up being their best.

Leslie Jordan and Cheyenne Jackson, along with the show’s women, give us the inside scoop on Season Three.

The show follows Kat (Mayim Bialik) as she runs her cat cafe.

Both men talk about their characters’ new love interests and character arcs.

Check out the interview below.

[You were originally cast as a different character, did you use anything from that character when approaching Phill?]

Leslie: It was so short-lived. It was originally going to be a piano bar, and I was going to be the piano player, so it was sort of a mix-up of Cheyenne’s [Jackson’s] character.

That only lasted a day because our creator Darlene Hunt called me and said, “We’re trying to cast Phyllis,” There were going to be three girls that commiserate on everything. It would’ve been the Kyla Pratt character, the Mayim Bialik character, and this new Phyllis.

I knew exactly where she was going. When I read the script, I thought, “I wanna play Phyllis! Phyllis is getting the laughs. I want the laughs!” And she said, “Would you, on your cell phone, just do an audition?”

And so there wasn’t a lot of time to play the other character. I think it’s more fun to have two girls and a gay guy commiserate; three girls, then it’s like a hen festival or something. You throw a gay guy in there, and all fun stuff can happen.

Leslie: I think I’ve told this story before, but when I was about six, I walked out of Sunday school and told my dad that “I was never going back ever again.” He said: “Oh, you love Sunday school. Why do you not want to go back?”

I said because “they laugh at me!” And he explained to me, at six years old, the difference between laughing at me and laughing with me.

He said you have this gift, and he told me this bible story about hiding my light under a bushel… and you’ve always, always got to let that shine. I think it’s something I’ve innately had. I come from a family of clowns. We Laugh and laugh.

We’ll go out to dinner, and I’ll see a family sitting there having a whole meal and not even speaking and thinking, “wow, that’s not us!”  We’re a family of clowns. I think it’s just the way I am!

Happiness doesn’t look like everybody thinks it does. That’s why Kat has had this whole trajectory that she’s had. For me specifically, Max is going through a mid-life crisis. He doesn’t know who he is; he is in his 40s and still working at the bar.

He just wants to be happy. He is aging, and he’s feeling the tick of time, and that’s what I think we’ve done successfully this season. We hone in on the six of us and what we want out of life.

What I’m really excited about for Phil [Leslie]’s character is we’re finally going to start finding out about his personal life and dating a lady of a certain age.

Leslie: Yeah! I think the beauty of this show is that they have kicked in for the last three years.

Many shows don’t kick in until the third season; it takes a while! Our characters are finally developed towards each of their actor’s skills. No one else can do what each individual does.

I love the table reads. They happen every Wednesday with a brand new script, just to see where we’re going with this.

We’ve now got 22 episodes to have fun with it. We have got the best writers in the business. They have assembled a writing crew that is seriously the best. So, get ready!

You have a huge following in Louisville, where the show is supposedly located. Will they be able to continue the Louisville theme in some way? Is that in any way integral to the story?

Cheyenne: I know the creators have tried to pepper as much as they can for Louisville folks. I’ve never been; I’d love to go.

I know they do it with the costumes or a random reference to something like a local business. Have you been there, Leslie?

Leslie: Oh my gosh! Yes! I exercised racehorses before I started acting! Do you know what I want to happen? I want us all to come to the derby! Like as a cast!

I think they’d get amazing publicity out of that.

What do you both think we should look forward to in Season 3?

Cheyenne: Leslie got me going on a train of thought. Shows take a minute. We started this show in the middle of a pandemic. We’ve still yet to have a live audience. We went through the whole first season with masks and shields.

We got a pretty bad critical response across the board when we came out. I think a lot of it was fair! I totally think that that’s the way shows go.

However, what we’ve been able to do over these last two years with these showrunners and writers who are at the top of their craft, is truly create real people who are going through real things. This season we’re dealing with Swoozie’s character dealing with issues with aging.

We have Mayim’s character, who is trying to have a baby in her 40s by herself! We’re still serving you great comedy, but I would argue that what we’re doing is on par with any multi-cam comedy on the air. I think we got lost in the shuffle at the beginning, but we found it.

Leslie: I agree! It’s like a new show. We want people that, if you saw us early on and thought, “this isn’t my cup of tea:” revisit us!

Come see us now! It’s so hard not to have an audience. It’s like telling a joke at a party, and nobody laughs. We have script supervisors that tell us to hold so they can put laughs!

It’s a crazy thing to be shooting a three-camera with nobody there. We were asked if we wanted an audience, but because we have cats, we can’t have the cats with an audience; they’d go crazy!

So we didn’t have an audience this year. We have so much fun with just us! Just our little group.

Can you tease what’s coming up with your characters?

Cheyenne: Max is going through a bit of an existential crisis. I can’t get into the weeds, but there’s some major life stuff happening that I, Cheyenne, as a dad, husband, and performer, am excited to jump into! There’s stuff I’ve never been able to play.

So it’s a cute storyline. I’m never, in all my 40 years working, I don’t think I’ve ever had a storyline where I have a love interest. It throws me off!

I read, and I ask: “oh my gosh! Are we going to kiss?” I’ve never kissed in front of the camera! It’s just so well written.

Are you hoping/glad to share more scenes with someone, in particular, this season?

Cheyenne: Leslie and I are both buddies in real life. So there’s a little electricity with us in these scenes!

What is one thing that you’ve learned since you started working on the show?

Leslie: I’ve learned to be more giving as an actor. I’m the scene-stealer, the funny guy who comes in with a zinger! In this, I can’t do that. I have to give.

To be a worker among workers has turned into a wonderful thing. I watch myself now!

I didn’t like to watch myself at all, but I watch myself now! Because there I am, being normal! A normal human being!

Cheyenne: I’ve never done a multi-cam comedy before. I come from the theatre world and take my work seriously. Tina Fay always told me: “Comedy is serious business.”

I had a judgment about what situation comedy was. I thought it was silly and not as serious as Succession or something. I’ve learned from this show that this work is important.

This work matters. We put our heart and our soul into these stories, and, yes, we are not tackling the hugest pantheon of socioeconomic things happening in the world or political upheaval, But what we’re doing is providing joy and escape. And our reach is far!

Thank you for allowing Leslie and me to make a case for this show. We feel like we didn’t get a fair shake the first season, and I get why. But now, we’re there.

What do you think about the new season of Call Me Kat?

Call Me Kat Season 3 premieres on Thursday, September 29th on FOX at 9:30 ET. Will you be watching?

Let us know in the comments below.