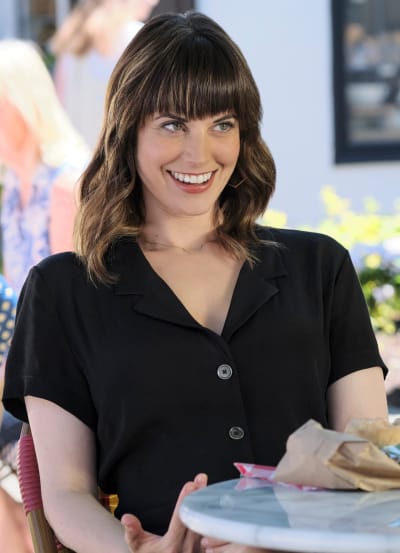 They sure packed a lot into the finale, didn’t they?

Chesapeake Shores Season 5 Episode 10 ran the gamut from relationships to health issues and ended with a significant cliffhanger.

Let’s run it all down.

Both of them are devastated, but Sarah chose to wall herself up in a cocoon of grief, leaving Kevin floundering to grieve independently.

When Sarah married into the O’Brien family, she knew they were a tight-knit bunch who relied heavily on each other for everything from socializing to emotional support.

Sarah wasn’t thinking clearly when she demanded Kevin keep their tragedy amongst themselves. His pain was just as deep as hers, and since he didn’t want to push her, he had to lean on his parents.

This is the first season where we’ve had the kind of emotional range we’ve experienced, from Mick in Chesapeake Shores Season 5 Episode 8 to Kevin’s breakdown on the balcony.

Sometimes, I forget that the cast is capable of much more than being one of the happy O’Briens, so getting to delve into their more human elements is kicking the show into a different plane of entertainment.

When you share your feelings with others, you never know what you’ll learn about them. This time, Kevin discovered his parents suffered a miscarriage, too.

Since Sarah needed someone to understand differently than Kevin, Megan’s experience was very helpful. It’s too easy to spin a miscarriage into something that it isn’t, and Sarah was heading in that direction.

By not wanting to share their tragedy, it seemed like she was blaming herself for what happened, and feeling responsible for a fact of nature isn’t helpful.

Sarah isn’t going to get over her pain easily, nor will Kevin, but with the love of family, they’ll survive it. And, as Megan said, Sarah will learn how strong she really is, a difficult price to pay for the knowledge, but it prepares you for what’s to come in life, too.

As much as the road to get there isn’t one I’d wish on anyone, there is a silver linking in truly learning your own strength.

Megan’s admission of having a miscarriage after Jess was born is an interesting revelation and could have played into her decision to flee the family.

We saw how tough it was for Sarah to deal with, so we know it will leave a lasting scar. They didn’t go there with Megan’s history, but if she didn’t deal with her experience as needed, it could have had long-lasting repercussions.

It’s also interesting that we are hearing about this at the very time Jess finally accepted her mother and forgave her for leaving. Can that be a coincidence? I don’t think so.

It also coincides with Megan and Mick’s trip around the world together, which appears to have been put off for a couple of reasons.

It isn’t easy to imagine what you’d do if your dream job landed at your feet. It’s even harder to imagine if you’d just reconnected with the love of your life and began planning your next adventure together.

Unfortunately, Megan’s offer comes with strings. A man who clearly fancies her has not only arranged the offer but will be working alongside her. Let’s toss a red flag on that play.

Megan was incensed that Mick could suggest she got the offer only because of that relationship and not on her own merits. But, frankly, it’s hard not to see the ways that man (whose name I cannot remember) was trying to grow closer to Megan.

He treated Mick like dirt in his own home upon arrival, and Megan didn’t really take note of it. She was in art-show mode. But when that guy sat next to Megan on the bench to remind her of the many offers at her feet, he sat very close and put his hand right behind her behind. It bothered me.

Yes, it could have been necessary for the scene since they were close together, but if it hit me as skeevy, then someone on set must have seen it, too. Therefore, it’s got to have meaning.

And while downplaying Megan’s work with Arthur Driscoll isn’t my intent, it’s just not realistic that Getty would come calling as a result of that show.

Also adding insult to injury was Mick’s declaration that if someone offered him a contract to renovate The Kennedy Center, he’d be tempted to take it.

Megan: But can you trust me?
Mick: Trust you not to leave me again? I don’t know if I can.

Because this entire story didn’t have enough layers and misconceptions, Mick is abusing painkillers. Yes, they do still recommend Oxycontin for injuries as insignificant as those Mick suffered. That’s part of the reason that they’re not recommended overall for short-term, moderately painful situations.

Oxy also induces a sense of euphoria, and with everything that Mick suffered lately, it’s not surprising he’d be looking for a quick fix.

By the time he and Megan were sitting together to discuss their next move, Mick was high.

Kudos to Treat Williams for pulling it off so well. He looked like Mick was three Oxys in by that time, and Mick’s behavior and the sudden realization that Megan could leave again is proof of his vulnerability from the combination of life and drugs beating on his door.

The trip around the world will be called off. Megan will probably take the job. Jess will feel abandoned all over again, and Mick will sink into a drug-addled pity party.

OK. I don’t write for Chesapeake Shores, but if all things stay the same, that’s how normal humans would behave. Thankfully, these are O’Briens, which could lead to a different outcome — or not.

Jess will have her hands full with David and the inn, so if Megan leaves again, she could fall hard.

David’s dad cleaned out David’s trust fund and all of his other accounts and fled the country under suspicion of wire fraud and embezzlement.

Can David and Jess successfully run the inn this early in the game without David’s trust fund? We don’t know enough about it to ascertain that for sure, but it seems unlikely since David was pulling from it regularly for maintenance.

This is a story that’s very difficult to predict. It could go south quickly, especially if Mick is addicted and Megan leaves for LA.

All isn’t lost within the family, though, as good things are in store for Abby and Bree.

Evan upped his game not only for Abby’s benefit but for mine, too. He’s not been an easy man to enjoy since he’s so childish at heart with more money than anyone should have.

But when Evan realized that he could have feelings for Abby, he made moves on her that would be hard to ignore. And as the family begins to crumble, he’ll be a welcome addition with his deep pockets.

Evan doesn’t care about money, so he’s willing to share without hesitation. But, for the most part, it’s people on the potential receiving end who are hesitant for many reasons.

But if Mick needs rehab, Jess and David need seed money for the inn, and Connor needs medical care, it’s easy to imagine he’d get aggressive in his willingness to help a family he is beginning to love.

Although they made it seem like a cliffhanger as to who Abby called, it was Evan. She’s been torn, and knowing that Jay has another love interest will make it easier for her to extricate herself from him and go for the excitement Evan offers.

Plus, we need him now.

As for Bree, she has accepted Luke warts and all. It is concerning that Bree and Luke weren’t a little more worried about Connor’s recent health scare and his lack of sleep than they were, but they had other things on their mind.

Luke needed legal assistance, and he and Bree were focused on keeping him out of prison. That drug test was highly problematic, and Connor wanted to win the case for himself as much as Luke.

It all worked out in the end, and Luke is a free parolee again. But even with Margaret’s care and some mini-smores, Connor is not out of the woods.

That kind of stress takes a toll. If you Watch Chesapeake Shores online, you know that, like Mick, Connor has been through a lot in Chesapeake Shores Season 5. Some of it is good, but even good things can add to your stress.

None of that even factors in that Connor could have a heart abnormality that’s just coming to light. His situation could be a combination of many factors. His last kiss with Margaret was good. It also seemed to cause his heart attack.

We have a long time to wait for answers to all of this, and since Hallmark hasn’t confirmed a sixth season for the show, the wait will be even harder to accept.

What did you think of this finale?

Was there too much going on, not enough, or just the right amount to keep you tuned in for the next season (should it arrive)?

Share your thoughts in the comments because there’s a lot to talk about!!

Bel-Air: Peacock Shares First Look at Reboot
‘The Bachelorette’ star Michelle Young: I made “the right decision” in my finale and am “very happy”
Watch Batwoman Online: Season 3 Episode 7
Batwoman – Episode 3.08 – Promo
Netflix Animation ‘The Monkey King’: Everything We Know So Far
Follow us on Facebook
Follow us on Twitter