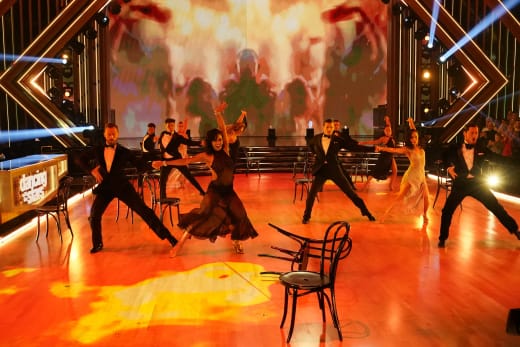 Dancing With the Stars has been killing it with theme nights in its move to Disney+.

To the surprise of everyone, there was no “Skyfall,” which was strange because that song was everywhere.

Alexis Warr returned to help him through an Argentine tango that served as another strong performance.

But, who got on the wrong side of judges and viewers on Bond Night?

The pair danced to Billie Eilish’s “No Time to Die,” and it was another showstopper for these two.

They’re truly on the upper end of the competitors this season and have the potential to steamroll the entire competition.

Trevor and Emma have been consistent throughout the first three weeks.

They also have a lot of chemistry which helps when showcasing a dance routine to the masses.

Daniel and Britt are another duo to watch, even at this early stage of the competition.

They haven’t struggled with a single routine yet and should make it far.

Jordin Sparks and Brandon Armstrong – 29 out of 40 – Safe

Jordin understandably had some dancing experience before the series kicked off.

However, there’s room for improvement; if she and Brandon can continue improving, they will be great competitors.

Selma pushed herself to the limit by performing live in a blindfold.

It was a risky performance that allowed the judges to see how far she was willing to go.

Pass them the mirrorball trophy?

Vinny’s significant improvement last week might have been a blip.

The Jersey Shore alum was unsure of himself throughout this performance, and it showed.

He escaped the bottom by the skin of his teeth.

Heidi has had a great redemption arc and is improving every single week.

She and Artem could win the whole season if she improves some more.

These two are a match made in DWTS heaven, and it’s easy to understand why.

Their performances are electric, polished, and are a lot of fun.

The country music star hit a lull in her third week.

The performance was a major backstep, but at least the duo made it through the week.

Joseph had another week without his pro dancer, but he and Alexis dominated with this one.

It will be fun to see how Joseph holds up when he gets his pro dancer back next week.

Whoa. That’s all I could muster while watching this performance.

Gabby and Val are, without a doubt, one of the best duos in recent memory.

It was a travesty that these two were at the bottom, to begin with.

Their performance and score signaled they would not be leaving any time soon.

Thankfully, they were saved by the judges.

Cheryl Ladd and Louis van Amstel – 24 out of 40 – Eliminated

Cheryl and Louis were at the bottom last week, but they were saved.

This season, the pattern is that the person saved by the judges goes home the following week.

What are your thoughts on the results so far?