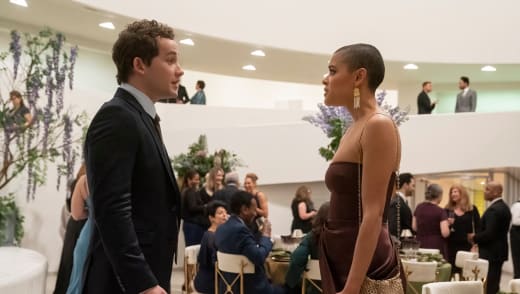 Just when I was prepared to rule Gossip Girl out for good, Gossip Girl (2021) Season 2 Episode 3 was a pleasant surprise.

The episode featured everything you’d expect from an hour in the Gossip Girl universe, and it certainly left me wanting more.

The strongest aspect of “Great Reputations” was the pacing. My biggest qualm with the reboot has been overstuffed episodes, but this was the first time it felt every scene was necessary to advance the plot.

We’ll start with Monet because she continues to be the main attraction.

One of the biggest concerns with Monet entering her villain era was that she would be straight-up evil and one-note. However, the writers go above and beyond to give Monet conviction. Honestly, I couldn’t imagine the series without her at this stage.

Savannah Lee Smith is comfortable as this young woman determined to make significant changes, and while Monet’s mean streak was on display throughout “Great Reputations,” she changed her approach when she realized Tiffany was queerbaiting.

Looks are always deceiving when people make deals to get power, and I was waiting for the other shoe to drop with Tiffany.

Good evening, followers. For those who might have been living under a rock, maybe you haven’t heard. There’s a new Queen of Constance.

Monet’s tenacity in manipulating Grace to be introduced to her made it obvious there would be a major caveat to creating an alliance with this person we didn’t know much about.

The back and forth between Monet and Julien as they both tried to steal Grace gave us some vintage one-liners reminiscent of the early feud between Serena and Blair in the original series.

I appreciated that Monet showed shades of good when she sent the tip to Gossip Girl about Tiffany. Monet thrives on chaos, and taking down someone queerbaiting was chaotic enough for her to feel satisfied, even if she did connect with Julien.

The feud between these two focal characters is definitely in its infancy. For now, the series wants us to believe they can find some common ground.

Obie: So, when does Tiff get in?
Grace: This morning. She’s taking the train down from Exeter, so I guess, like, 10:00? She’s literally the coolest friend I have. I can’t wait for you to meet her. Julien: Great! You’re here.
Obie: Yeah, and I’m in the middle of a conversation with my girlfriend.
Julien: That’s who I was talking to. Hot chai with vanilla sweet cream foam? Grace: My favorite order. How’d you know?
Julien: You mentioned it was your go-to afternoon pick-me-up over New Year’s Eve, and I’m a good listener.
Obie: Yeah, because you and Monet were trying to sabotage her.

However, there are still seven episodes of Gossip Girl (2021) Season 2, so we should probably buckle up for the drama to mount.

Despite their deeply-rooted differences, it was nice to see the teenagers come together at the end of the episode. It’s been hard to believe this group can be friends, but when they’re bonded through chaos, it makes it all seem more authentic.

These kids love the drama.

Obie’s storyline with Senator Byron and Grace gave him some much-needed purpose. He’s largely been on the periphery since the beginning of the reboot, but there were some clear signs of a good character arc throughout this hour.

I’m not entirely convinced by his taking orders from Grace’s mother. I mean, he’s powerful and influential, so why did he allow her to talk down to him about his friend group?

Yes, Julien, Max, Audrey, Monet, and everyone else caused some big scenes at the event, but why did it all get blamed on Julien?

The series works better with Julien and Obie as friends. It would be straddling the fine line between nauseating and predictable if the writers thought we were invested in them as a couple.

There’s no connection between them, and watching them navigate life as friends is more exciting. Obie saw a different side to Julien.

Zoya: You didn’t answer my call. Nick: Excuse me? I was… I was in court.
Zoya: Not according to your office. They said you took the morning off. So is honesty really the best policy?

What she pulled in the Hamptons at the end of Gossip Girl (2021) Season 1 was catty, to say the least. But there’s now some exciting progression for her.

Was anyone else totally blindsided by the fact that Grace is cheating on Obie? That came out of the left field and totally threw me for a loop.

It also makes me wonder why her mother thinks she has any say in Obie’s life. Her mother is a Senator, so of course, she knows her daughter is sleeping with another dude.

I hate to admit it, but I will feel awful watching Obie’s reaction when he inevitably finds out. My best theory is that Julien will unearth the truth, and Obie won’t believe her.

I hope I’m wrong, but teen dramas know how to rip these friendships apart.

The deep dive into Kate’s past was needed because her father’s story shows him resentful for never having a seat at the table, something that Kate is probably worried about down the line.

She has some profoundly rooted resentment towards these teenagers, probably thanks to her father. Kate was one-dimensional on the first season, thanks to her murky reasons for targeting the kids.

Her romance with Mike came out of the blue, so it wasn’t much of a surprise to find him working with someone to unmask Gossip Girl. It could be Camille de Haan paying his fee, or it could be the iconic Georgina Sparks.

The drama between Zoya and Nick was genuinely horrible. As a parent, Nick needs to find a way to ensure his daughter doesn’t question everything he does because it’s growing frustrating to watch their constant disputes over things that could have been avoided.

Nick isn’t much better because he has a self-righteous attitude about everything. It was utterly embarrassing to have them both arguing at the event.

Audrey: Well, it says here that they’re going to that charity event at the Guggenheim that Grace’s mom is in town for.
Max: Yeah, so?
Audrey: So maybe we’re thinking too small. I mean, why be a local sensation when you can be a global one?

Nick is taking money from Davis because he can’t afford this lifestyle, which will pop up before the season ends. Shan won’t be able to stay quiet about it for too long.

Zoya is her best friend, so this will come up soon.

That’s all I got, Gossip Girl fanatics!

What did you think of the exciting episode?

‘Lately’: Larry Wilmore Late Night Comedy in Development at ABC
Godfather of Harlem – Episode 3.07 – All Roads Lead to Malcolm – Press Release
Cleo – Dramedy In Development At Peacock
The Way Home Season 1 Episode 3 Review: I Don’t Want to Miss a Thing
‘The Last of Us’ Diverges From Its Source Material to Tell a Moving Love Story (RECAP)
Follow us on Facebook
Follow us on Twitter