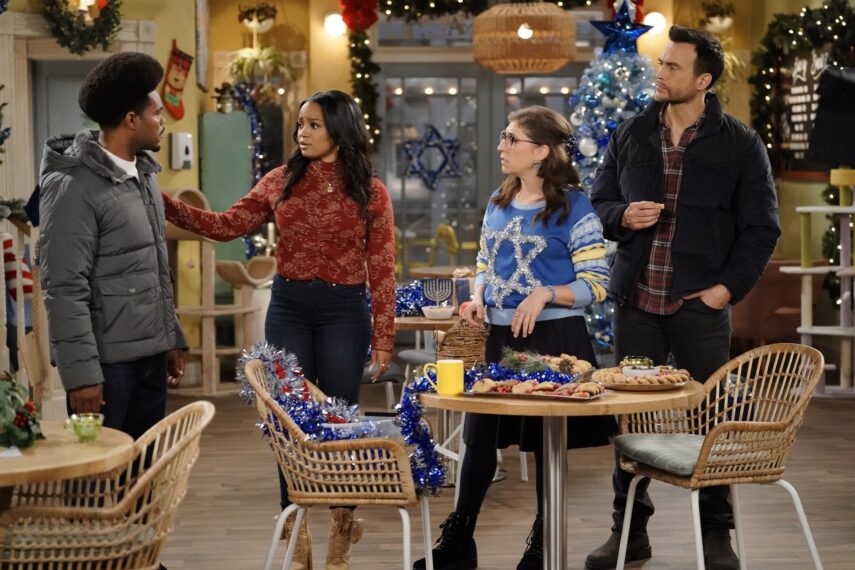 Call Me Kat is getting festive for a fusion of holiday spirit with its midseason finale, “Call Me Chrismukkah,” which marks the first episode without late star Leslie Jordan.

While Kat (Mayim Bialik) keeps a close eye on Max (Cheyenne Jackson) during a rock climbing gym excursion, Carter (Julian Gant) faces challenges of his own after being excluded from a Christmas pub crawl. But even as these new narrative situations unfold, the stars behind the scenes are still adjusting to the absence of their costar Jordan.

Below, Bialik previews what it was like filming this season’s holiday episode without Leslie Jordan, teases some sweet surprises, and previews Vicki Lawrence‘s role as Phil’s mother who will appear in the January 5, 2023, episode, “Call Me Philliam.” Scroll down as Bialik takes us behind the curtain of Fox’s comedy. Leslie Jordan was one of a kind, as was Phil Krumpler. The executive producers recently shared how Phil’s absence will be dealt with. As a producer on the show, were you a part of figuring out how to pay tribute to not just Phil but to Leslie?

Mayim Bialik: It’s not just me as a producer. I really feel the entire cast was included and has been included in such a beautiful way. There are a lot of times when I get to be a producer, but more often than not, I really am an actor. And so it was really lovely how Jim [Reynolds] and Maria [Ferrari] and all of our writers included the cast in these conversations. We almost always spoke as a group with Jim and Maria and that was really important to us. We’re a family and we lost a member of our family is really what it feels like for us.

All of those decisions did happen together, and as in any family there, there wasn’t always necessarily one clear way to do things. I think it was Jim that finally said, there’s no way that we can feel better about any decision we make. And honestly, that really helped to hear, because, with grief in general, you want to find the one thing to do to feel better. And in this case, there really isn’t one right way. So some people may like what we do, some people may not like what we do. Once we realized that, it made all of the conversations [about] how we get through this with as much grace as we can in the most respectful way that we can. How was it having Vicki Lawrence come in as Phil’s mother for an episode which airs early next year? Is her character a lot like Phil or very different?

We’ve always talked a lot about everybody’s potential family members making an appearance on our show. I’ve fantasized who I think Randi’s mom would be, or Carter’s dad would be, and if Max had a long-lost sister, who would it be? So the fact that someone with a connection to Leslie as Vicki has personally and in their professional lives together is so special. It really just feels like an extended family member coming to be supportive. She’s a legendary icon and literally one of the three women I credit with my training as a comedian. Her, Lucille Ball, and Carol Burnett were kind of my big three growing up.

But beyond that, we don’t want to try and replicate Phil, because you can’t. Just like Leslie Jordan, there is no replicating that character or person. But we wanted someone who had enough of the feel-good aspects of Leslie’s character and enough of that sharpness and fun Leslie brought to his character. She is her own woman, we age her up, but she’s not the destitute woman that sometimes Phil’s character would describe her. Is anyone else set to come in and fill that void for now?

This week specifically, you know, is a tribute to him, as it were. And we break the fourth wall as we always do for our waves, but we speak directly to the camera. So that’s kind of the specificity of this episode. Going forward, our writers are gonna explore different aspects of adjusting to someone not being there, if that makes sense. And I think that absolutely is going to lead to some other faces coming in. I can’t reveal yet some of the things that we have in mind, but I think that they will be people that speak to the sweetness and loveliness, and feistiness that Leslie was for us.

With this week’s episode, it’s Chrismukkah….is everyone on board with the merging of the two holidays? Any fun jokes about the different traditions?

There are so many memories wrapped up in how we began filming that episode, and then how we stopped filming that episode and how we had to rewrite parts of that episode. When we filmed it, it was already weeks from when we had rehearsed with Leslie. So there were some changes that were made. None of us wanted to think about the way we were celebrating Christmas and Hanukkah. But I will say that the cafe is very festive as it should be for this time of year. There are definitely some corny Christmas and Hanukkah jokes and there’s a lot of ice in [this episode]. So it’s a very chilly episode that we manage to make very warm, and we also have a real-life penguin in this episode.

We know Kat is watching over Max at a rock climbing gym in this episode. What was that experience like?

In addition to filming this episode and mourning the loss of our beloved friend, Cheyenne and I did rock climbing for approximately six hours. I did injure my elbow just from repeated clinging. But we also have this really outrageous aspect of this episode where we are literally in a rock gym and got to work with real rock climbers. I think for me, and I can’t speak for Cheyenne, but I think for both of us, having a very physical thing to do when we came back [to work] was helpful. Grief lives in all of your body and having a lot of strenuous work to do was helpful for us.