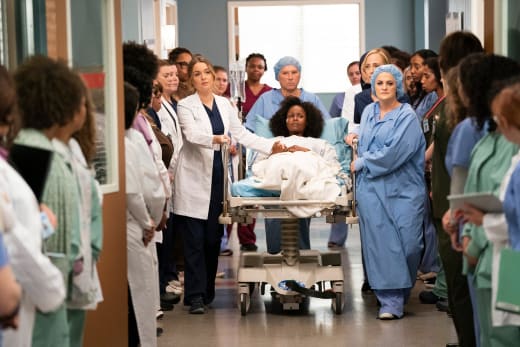 Elisabeth Finch, a writer and consulting producer on ABC’s Grey’s Anatomy, has admitted she “lied” about various aspects of her life while working on the show.

The admission comes several months after Finch resigned from the show after being placed on administrative leave as Disney investigated the claims.

“I told a lie when I was 34 years old and it was the biggest mistake of my life,” the 44-year-old revealed in an exclusive interview with The Ankler.

She previously claimed she had a rare form of bone cancer called chondrosarcoma.

Additionally, it has been reported that Finch lied about her brother committing suicide.

Finch allegedly left a note explaining an absence from the Grey’s writers room.

“He was on life support for a short while but ultimately did not survive. I say this not because I need or want anything from anyone, I’m not a delicate flower or whatever, I just want people to know I’m still here, still part of the team.,” the note read.

Eric is actually a doctor who works in Florida.

“She always had some tragedy or bizarre hardship going on in her life,” one colleague recalled to The Ankler.

“Things that don’t happen to other people happen to her all the time.”

“The best way I can explain it is when you experience a level of trauma a lot of people adopt a maladaptive coping mechanism,” Finch explained of the lies.

“Some people drink to hide or forget things. Drug addicts try to alter their reality. Some people cut.”

“That was my coping and my way to feel safe and seen and heard.”

Finch said that her family, including her wife, disowned her as a result.

“I wish I had a grid that would show who’s not talking to me because they can’t [legally],” Finch said.

Finch recalls people who “were immediately very, very nasty on text,” she said.

“Family and friends who called me a monster and a fraud and said that’s all I’ll ever be known for and soon more truth would come out.”

“Everyone was so amazing and so wonderful leading up to all the surgeries. They were so supportive,” she said of the response to the injury.

“And then I got my knee replacement. It was one hell of a recovery period and then it was dead quiet because everyone, naturally, was like, ‘Yay! You’re healed.'”

“But it was dead quiet,” she continued.

“And I had no support and went back to my old maladaptive coping mechanism — I lied and made something up because I needed support and attention and that’s the way I went after it. That’s where that lie started — in that silence.”