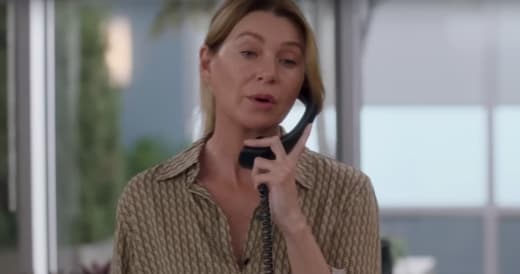 ABC has finally shared the trailer for Grey’s Anatomy Season 19, and it looks like there will be a lot of changes.

The clip hints that there is still trouble in paradise for Meredith (Ellen Pompeo) and Nick (Scott Speedman), who are both recurring players this season.

Meredith doesn’t look too happy to see Nick at Grey Sloan, more so when he reminds her that it’s been six months.

“It’s been a very difficult six months,” Meredith responds, but we don’t know whether they met in that six month time period or if some crafty editing is making us think otherwise.

It’s hard to get a big enough read from a 60-second clip, but what do know is that their relationship is frosty, to say the least.

“Congratulations. You did it. You’re here,” she tells the new Residents.

Link (Chris Carmack) tells Meredith he slept with one of the interns, and we get a great callback to the beginning of the series.

“I’m in no position to judge you on this,” she replies.

“I do recommend you stay away from elevators.”

ABC also dropped a synopsis for Season 19, which you can read below.

After a long six months, Grey Sloan Memorial has reinstated its residency program.

A group of talented and striving young interns has been recruited as the attending surgeons work to rebuild the program to its former glory.

Meredith, still functioning as the interim chief, sees Nick for the first time since she rejected his offer to move to Minnesota.

Meanwhile, Bailey tells Richard she is not ready to return to work; Levi works up the courage to break disappointing news to Jo, and things turn awkward when Link realizes he has met one of the interns already.

With Amelia and Maggie’s help, the new doctors are thrown into their first day on the job dealing with injuries from a recent tornado.

While Pompeo and Speedman are scaling back their duties, the following cast members are locked in as series regulars.

Jake Borelli (Schmitt) will also be back, while Kate Walsh will recur as Addison Montgomery.