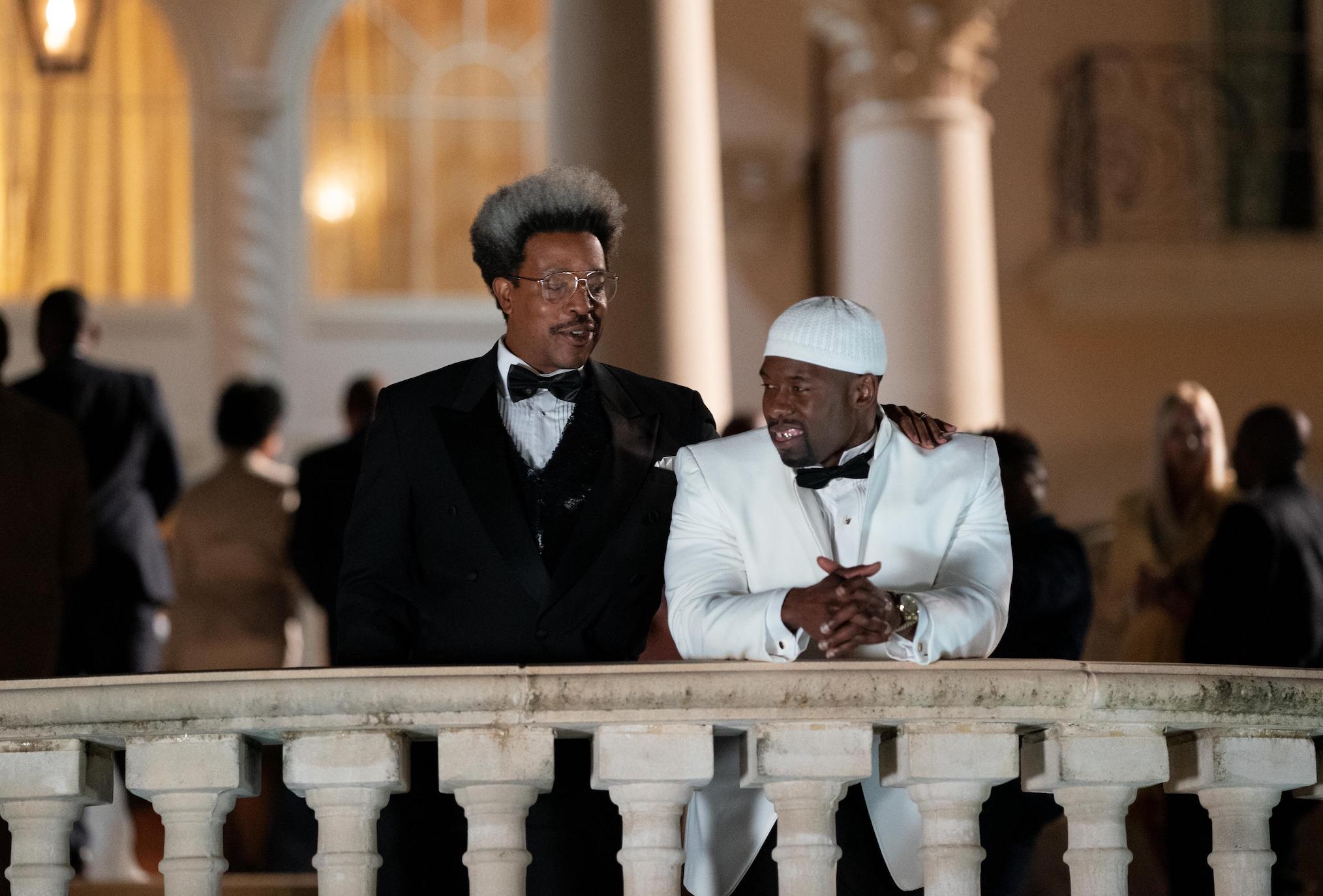 Don King was an easy character for Russell Hornsby to slip into — not just because the wig and costumes do a lot of work in putting on the persona of the infamous boxing promotor, but also because Hornsby, like King, is just as naturally bombastic.

Hulu‘s Mike Tyson biopic, Mike, was unapproved by its subjects. Following the limited series’ release, the former heavyweight champion slammed the show on Instagram, saying, “They stole my life story and didn’t pay me.” How do you approach a role when the real person you’re playing isn’t available? Hornsby tells TV Insider it’s more than possible, as it’s about finding the humanity of the character. While he would have liked the chance to speak with the 91-year-old King, learning from YouTube videos of his time alongside the ring sufficed.

Hornsby co-starred with Moonlight star Trevante Rhodes as Tyson in the eight-episode miniseries, streaming now. We only see a small glimpse of Hornsby in the finale in the form of Don and Mike’s final altercation on a Miami highway after Don stole millions from him. The finale goes on to land a compelling ending that brings an end to the boxer’s arc. Rhodes’ Mike narration each episode comes from a speech he’s giving about his life sometime in the future. Mike paints a picture of how unaddressed childhood and teen trauma influenced his psyche and behavior, aiming to give context to the infamous Evander Holyfield ear bite and his other controversies.

Mike the series rightfully steers clear of justifying the boxer’s controversial actions. The rape accusations against him are addressed in the season, and while Mike defends himself when breaking the fourth wall with viewers, the show’s framing and delivery of it do not imply there is something to condone there. By contextualizing the moments, however, viewers can get an understanding of the full picture of a world-famous athlete who was consistently dehumanized — something Hornsby says is often unique to Black men in sports.

Here, Hornsby breaks down his time playing Don, the function of biopics, and more.

Don and Mike’s tension comes to a head in the finale. What did you think of Don’s last lines in the show? I thought they fit the character pretty perfectly.

Russell Hornsby: It’s like you’re the villain to all, but you’re the hero to yourself. It’s like having a little psychosis, believing your own hype and your own lies. And in a sense, he’s sort of right.

For all the negative, he did help fighters make a great deal of money. He got fighters some of their biggest pay days known to man. He made the fight game a show. And I think in his mind, he’s saying, “None of you appreciate what I’ve done for you.” But I think he’s more importantly saying for the sport of boxing, “I am not appreciated. This is crazy. Everybody’s making money because of me. Everybody’s eating off of me because of my charm, my wit, my everything, and none of y’all appreciate me.” I love your costumes in this series. Does Don King’s look help you slip into character faster?

It does. It was the hair, the glasses, but it was also the paunch, which changes his posture in a way. It made it easier to find his voice, his cadence and his rhythm. It was a challenge, to say the least, but it was something that’s always sort of been a part of me, if you will. I’ve been doing theater for a long time. [I’ve done] somewhat similar characters in theater, but then you realize people haven’t seen the characters. You do theater, there’s 200 people a night or something like that. And then that’s it. I just realized, “Oh, I have to kind of go in my bag and find Don.” [Laughs] It was a lot of fun. Wardrobe, hair, and makeup helped a lot.

You’ve talked in previous interviews about not being able to meet King in preparation for the show. What would you have asked him if you had the chance?

I would’ve asked him more about his time pre-prison, what it was like growing up in Cleveland in the ’40s, ’50s, and ’60s, what life was like [in terms of] the level of injustice, how he got into the gangsterism and the mob and all of those things. How he got into the street life, basically. And I would also want to get his sense of how the street life helped him in his promoting and what was his philosophy on promoting.

What does the research and preparation look like when playing a living person who isn’t involved in the project?

I read the unauthorized biography on Don King and watched a lot of YouTube clips of interviews. They had a lot of interviews that started in the ’70s, and I saw how early on he was very mild-mannered. In the ’70s into the ’80s and ’90s, you see the character sort of come to life, and then the personality, the persona changed.

These YouTube clips helped me to understand his cadence, to understand his vocal range and the pitch of his voice and the pitch of his vocals in different scenarios. Also how he was in different interviews, when was he being very honest and direct with a reporter versus when he was being very bombastic and showy and how it was part of his tactic to get what he needed and how that changed his presentation.

Also the thing for me as an actor versus, let’s say, if I was comedian, I deal in essence, not mimicry. I am not Don King. I can resemble him in moments, but I am not him. I gave myself permission to deviate a little bit and not try to get him throughout the series spot-on, just right. I wanted to make sure the essence of him was felt more than the exact, more than trying to mimic who we think he is. That was a specific choice I made.

You’ve never seen him sitting down having a plain conversation. We don’t know what he sounds like when he’s subdued, relaxed. You always see him loud and broad and with a smile on his face, so then you have to take some dramatic license and just create what you think he sounds like. Were there any aspects of yourself that you brought into the character?

Just what I was saying earlier: I’m a very theatrical individual, generally. My friends and family who know me when I hang out know that I am loud, crazy, theatrical, and broad. I think that’s what helped me tap into Don and that bigness, because that is in me. I’m not shy; I am big. It gave me an opportunity to show that side of my personality.

There are so many biopics nowadays that I feel like some don’t have a point to make; people are just making them for the sake of making them. I don’t think Mike falls into that category. What message or points do you think are made by using Mike Tyson/Don King as a lens?

Well, for me, the larger point is that we have to look at athletes as people, as human beings. I think that back in the ’70s and ’80s, and even in the ’60s, athletes were being used. When that happens, we don’t look at them as human, and so therefore we can allow for all of the mishaps, for all of the tension, the drug use, the behavioral issues they have, and we can overlook them. And we do, as long as the money is being made.

My hope is that with today’s lens, we can look at figures like Mike Tyson and others and say, “let this be a cautionary tale for us today.” Let’s not look at Mike and Don just to judge them. Let’s look upon them to hopefully understand what sports and life was like then, how we misread aspects of these people’s personalities and their behavior. How can we look at it through a different lens now and be preemptive with a lot of issues that athletes, entertainers, and other public people are going through?

My hope is that we’re able to have a nuanced conversation about what was, so that in present day, we can look at it and not judge people, but have a little level of empathy and understanding for what they went through, and then what are people going through today by extension. With today’s lens, I think we constantly look back and judge people. We look back and we say, “they were bad.” But again, we didn’t have the understanding about mental health that we do now. We didn’t have the same sympathy that we have for misogyny, meaning how we look down upon it today, whereas it was just status quo then. What was it born out of? We want to judge people without understanding what the times were.

Now that we’re in a different time, we look back and say, “you were bad,” but here, we’re instead saying, “the country was f***ed up. The world was bad. Everything was different.” Now, we understand mental health. We have a different regard and appreciation for feminism/women’s rights, racial politics, all of these things. That’s why I think this biopic is important, because we’re looking at it through different lenses and helping people have a nuanced conversation about these issues.

I think there can and should be space held for fair critique of things when necessary. I feel like that’s what Mike was doing in general, because there are plenty of fair critiques to be made about Mike Tyson and Don King. But like you said, the world they lived in and were operating in also need to be considered. Both of those things can exist simultaneously.

Yeah. I think we also have to look at where America was then, how America viewed the Black body and Black men at that time when we’re talking about entertainment and athletics. They were perceived as “you are here simply to entertain,” right? That’s why they allowed Mike Tyson to do what he was doing to the extent that he did. That’s why Don King took on that persona, because he knew, “if I came to you flatfooted as a layman, you wouldn’t appreciate me. I have to give you a show, because that’s what you want. That’s what America wants from Black people. They want to be entertained.” And that’s what he said.

He said as long as you get guys fighting, as long as they can get a show, they’ll accept you, because then it takes their mind off of all those that don’t have. It’s just like when we talk about racism in this country and people say, “there is no more racism! Look, we have Obama!” And it’s like, hold on, ’cause you wanna look to the best and say that’s the example for everybody. But he’s one person.

We get to see Mike summarize his arc in the final moments of the finale. If you got to do the same for Don, what would you say?

It sounds cliche, but he is a man that succeeded against all odds. And as he said, even though he was made by America, it could only happen in America that he was able to reach such heights. Because of his intellect, his willingness to put it all on the table, but also, for better or for worse, because we are in America. You have to take the crooked and the straight.