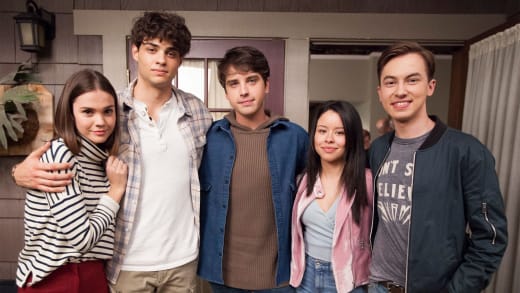 When most people think of foster care, they usually think about what they’ve seen on TV, which isn’t a lot.

It’s just one of those things writers don’t tend to dig deep into, except for a few choice storylines that usually end up on the cutting floor.

If you’re a fan of family dramas, though, there’s a good chance you know about The Fosters.

The Fosters was a Freeform series that featured a family thrown into disarray when a teenage girl (Maia Mitchell) and her younger brother (Hayden Byerly) end up placed in their care.

There’s also a good chance you remember its spinoff, Good Trouble, which is currently in its fifth season and features several characters from the latter living their college lives in Los Angeles.

While both shows showed you a side of the system not typically shown on broadcast, another, just three years before, was also doing that.

But most people don’t even know it exists.

For those who weren’t already watching, Life Unexpected aired its first season in 2010.

The CW original starred Britt Robinson as Lux Cassidy; a 15-year-old stuck in the Oregon state foster system who planned on getting emancipated with her best friend.

After being denied in court due to lack of funds, Lux goes out to find her birth parents, played by Shiri Appleby and Kristoffer Polaha, hoping to get them to sign their rights away.

As things typically turn out, Lux lands herself in shared custody with her parents, embarking them all on a journey of parenthood and what it means to be a real family.

Each week the show averaged 2.0 million viewers, earning a small yet reputable fanbase before its end after just two short seasons.

But what makes The Fosters and Life Unexpected so similar?

Aside from the fact that both were created to bring light to foster kids’ abuse and troubles, the main characters in each had a similar upbringing that shaped how they grew up.

They also explained why they made the decisions they did throughout.

In the pilot episode of The Fosters, it’s explained that Callie had been in several foster homes that treated her more as property than as someone who could have been a part of their family.

Later she describes her past homes as abusive and her former foster parents as the type who would use her for the monthly check instead.

In Life Unexpected, Lux says nearly the same thing to her birth parents when asked by her social worker.

It’s not unusual to hear about in either capacity, though.

A study in 2005 showed that 32.8 percent of kids that enter the foster system endure some mental or physical abuse from a member of the household.

Considering when both shows came out, it’s impressive that the writers would want to bring awareness to the types of things that happen so often in out-of-home care.

More impressive is that channels such as The CW and Freeform openly discussed said topics.

Before The Fosters aired, there weren’t many broadcast shows that delved into topics like the foster system, interracial LGBT marriage, and mixed families.

But just because they were brave enough to open the discussion doesn’t mean they didn’t use the usual dramatics to amp up views.

On Season 2, Episode 1 of Life Unexpected, Lux met a handsome stranger in the bar her father owned.

She was going through several significant life changes then, so what better decision to make than to follow someone she had met hours before to ‘the ocean’ on a whim?

Later in the episode, Lux discovered that the handsome stranger she previously kissed on top of a billboard was none other than her new teacher, who would soon move in with her dad and his roommates.

While Callie didn’t have an affair with her teacher, she was involved throughout the seasons with her foster brother Brandon (David Lambert).

The pair officially began their scandalous relationship in the summer finale, leaving viewers to wonder if they would try and keep their newfound relationship a secret or confess to what they had done.

After years of a will they, won’t they story, arguably the most popular on-and-off pair to viewers, the couple luckily ended up with different partners when the series inevitably ended.

It makes you wonder why many writers insist on pairing their characters together following the forbidden love trope.

Much like Life Unexpected, the writers had Callie decide if she wanted to pursue legal action against the person who had caused her the most abuse.

Early on, Callie tells the Fosters that she was in a foster home that treated her as one of their own. She was introduced to others as their daughter, taken on family vacations, and even told that she was a part of their family no matter what.

Eventually, it all took a turn for the worse when her foster brother began sexually abusing her, using her love for their family to keep her quiet about what he was doing.

Callie eventually tells a court that she was abused by him, going against the advice of her lawyers not to.

In Life Unexpected, Lux’s best friend Natasha (Ksenia Solo) finds herself placed with the same family that Lux was once set with.

On the outside, it seems great. Natasha is cared for and hasn’t been abused, unlike other homes she’s been placed in in the past.

The only problem is that Lux was placed in the home years before and was molested by her foster father and thrown down a flight of stairs when she tried to fight back one night.

Lux finds herself in a difficult situation when she has to testify against her former foster father to help Natasha. Ultimately, she decides to do this despite not being ready to tell people what happened.

Both Callie and Lux showed incredible strength in telling people what happened, but it begs the question if any of the writers had used inspiration from the latter on their own.

Knowing both shows and having rewatched both several times, it’s shocking seeing how close the similarities are with each show created years apart from each other.

That’s not to say it’s a bad thing.

In television, to write a show, you have to know what your audience wants, and if one show worked before with viewers and there’s the possibility of making it better, why not do it?

Hopefully, in the future, there will be another show brave enough to talk about what these two did, but for now, rewatching from the beginning will have to do.