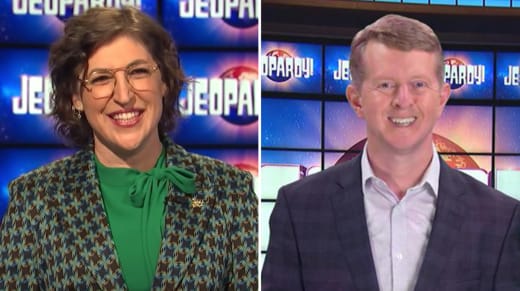 It’s hard to believe that the Jeopardy! has yet to name a permanent host.

Following Alex Trebek’s death in 2020, the series employed temporary hosts as questions mounted about who would become the face of the series long-term.

Executive Producer Mike Richards was named permanent host a year ago, only to depart shortly after following unearthed anti-Semitic, misogynistic, and racist jokes came to the forefront.

During the Daytime Emmys, fellow EP Mike Davies spoke to press and said that “we hope to have a hosting announcement very, very soon,” according to Variety.

Mayim Bialik and Ken Jennings have effectively been sharing hosting duties on the daily version, with Bialik also hosting primetime editions on ABC.

As a result, many think either of those two will be named permanent hosts of the series, but there’s also a possibility that someone else could emerge with the coveted job in the end.

Buzzy Cohen recently suggested that another name could be in the running, meaning that all we can do is speculate at this stage.

ABC seems intent on making the franchise bigger, possibly calling for more than one host across the various projects.

It’s hard to imagine Bialik becoming the permanent host, given that her FOX comedy series, Call Me Kat, has been upgraded to a fall slot instead of midseason.

This means the show will likely be putting out far more episodes than its first two seasons, making it difficult to appear as much on Jeopardy.

The franchise remains a priority because it commands strong ratings. It had just won Outstanding Game Show at the Daytime Emmys ahead of the comments from Davies about the future host.

What are your thoughts on the situation with hosts?

Do you think there should be one, two, or even more?

Who do you think is best for the job?