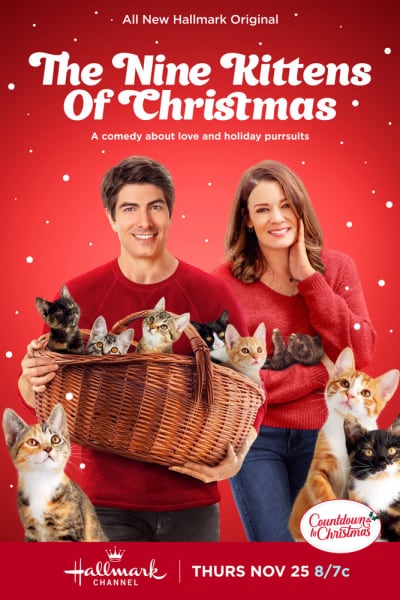 When it comes to movies, everybody has Christmas favorites.

There are traditional films like It’s a Wonderful Life, Christmas Vacation, and Elf. Then there are the Countdown to Christmas originals on Hallmark that have sustained repeated viewings year after year, even as more movies are dropped by the dozens.

The Nine Lives of Christmas is one of those films that immediately warms the heart and stands the test of time.

Cats are rarely the focus of holiday fare, so for those of us who love feisty felines, celebrating with our furry companions hits the spot.

But the real draw was the story and the chemistry between the stars Kimberley Sustad and Brandon Routh.

Thanks to their relationship with their cuddly pals, their characters, Marilee and Zachary, find common ground and love just in time to celebrate Christmas together.

It’s been seven years since that movie premiered in 2014, but tonight, The Nine Kittens of Christmas brings it all back to the surface.

We tracked down Kimberley and Brandon to get their thoughts on stepping back into the Nine Lives world.

Kimberley said fans had been showering them with ideas for a sequel for years, but she was hesitant to sully the beauty of the original movie with a story that might not offer a new direction.

She said, “And then about a couple of years ago, the producer kind of suggested a concept that, because so much time had passed, there’s a story we can tell there, that’s essentially a new movie and not revisiting a relationship that already exists.”

She likes how the passing time is addressed in The Nine Kittens of Christmas and how it explores what happened between Marilee and Zachary since we last saw them.

“These two have matured a little bit, but their old patterns still exist,” Kimberley said. “I don’t want to give too much away, but some things happened in their relationship. And Marilee essentially walked away.

“And this movie is about putting your heart out there again or not, or trust, or regret, like dealing with regret and decisions that were made and hearts that were broken and also finding each other again, under similar but new circumstances.”

Kimberley laughed. “So also, if the story doesn’t work, there are ten cats now at all times, nine kittens, that steal basically every scene, crawling all over me. And they’re so cute.”

Brandon agrees that the cats have something to offer. “Probably the cats had a big role to play in that. They were great.”

He also noted that The Nine Lives of Christmas might be so long-lasting because of how they played it as a straight romantic comedy. “I guess I underplayed moments, which maybe could have been bigger. I think it had a more realistic tone overall for the film, a more grounded and realistic feel for the film.”

Brandon also had some hesitancy about revisiting The Nine Lives of Christmas. “I was a little bit hesitant because I wanted to make sure it was a story worth telling and also that the film was going to have the same energy, the same level of humor and fun as the first one did.”

Once they had the story down, it was easy for both of them to join forces once again.

“Sometimes when jokes are written, and especially with romantic comedy, there’s a tendency to really amp it up. There’s a fine line between doing that too much or too little.

It’s just finding that, and that’s trusting your scene partner, and Kim is so funny and great, and we have great chemistry and are both love comedic films. I think we work really well together,” Brandon said.

Kimberley said that she and Brandon have been friends since filming the original film, making working together again very easy. “We worked so great together. And actually, after, I was really sad, because I was like, ‘Well, are these two done now?’

“Are Marilee and Zach done? I don’t know. But it was kind of sad to hang up the hat, thinking that we were. Yeah. He’s fabulous. He’s the nicest person in the world, and he’s so kind and generous, and he’s a great actor. I couldn’t ask for a better scene partner, really.”

If their cats brought them together initially, it’s nine kittens bringing them together again. “She’s now a vet before she was in school and is the one that can help. So they kind of team up to save these little babies.”

Working with cats for scene partners doesn’t come without its challenges, though. “Well, you fall in love with these babies really quick, every single one. I mean, that’s the only problem,” Kimberley said.

Brandon found something quite positive out of the chaos kittens present. “The most challenging thing with working with cats and kittens is just staying in the scene and not letting it throw you when they are clawing you, or trying to escape, or jump,” he said.

“You really have to be open and let the scene just play out that way because sometimes they add a moment of realism because you don’t expect them to do things. An acting technique, there’s something called the moment to moment. That’s very important, and also having independent activities.

“You see people eating in scenes; that’s an independent activity that allows you to focus on something that’s not the scene in a way, so it keeps you from thinking about your dialog and being stiff. The cats certainly have that same ability to keep you very present.”

Brandon said his family came very close to adopting one of the kittens, but they felt they traveled too much to commit to a new member of the family.

In the movie, Marilee and Zachary work hard to find furever homes for the brood of kittens, but in real life, the kittens were just as lucky.”

She said, “Our entire cast and crew adopted all of these cats. It was really cute. Every time we yelled, ‘Cut,’ whose ever cat it was, mom or dad would pop in and be like, ‘Hi, baby. We had these grown cameramen talking about the blankets that they bought for their babies, getting their house ready for them to come home on the last day of filming.

“So they got all these cute little blankets and stuffies. And I mean, that’s the only risk is how much she’d fall in love with these animals after the entire period of filming a movie. So yeah. Cute little stories there that happened with all of them.”

Kimberley is confident that those who haven’t seen The Nine Lives of Christmas will still fall in love with The Nine Kittens of Christmas. “We’re getting a full new story, watching these two discover each other again, and the pull of wanting them to be together, like, ‘just say it, say it!’

That feeling of a second chance at love comes with a lot of caution, Kimberley said. “We’re dealing with, ‘Can I? I do not want to make the same mistake twice.’ And some things that you might be feeling and sort of like, ‘Will this be a waste of time again? I’m going to invest my heart and life and time into this person again and really break my heart.’

“So I think the stakes are even higher in this one than they were in the first. And we’re dealing with this pull of familiarity between each other, which is interesting that me and Brandon found, like, ‘Oh, I know what you’re like up close.’ And when you get a little close, you go, ‘I know you. But I can’t because I’m terrified.”

There’s something in The Nine Kittens of Christmas for everyone. “Marilee isn’t necessarily your polished, lip-glossed girl. So I think there’s the everyday person to that character. And Brandon’s so down-to-earth too, like blue-collar firemen, that everyone kind of relates to,” Kimberley said of the hook the movie provides viewers.

“We don’t have these jobs that are above the average person, or we don’t have these things that you can’t relate to. And Marilee eats ice cream and loves it and wears ugly sweaters and puffy coats. And that’s just all of us.

“So there’s a relief to being able to kind of see, I think, your own lives in it like you were saying. You know? And your own relationship to animals and how they really do bring people together.”

We hope that you take some time tonight to watch The Nine Kittens of Christmas. It’s like visiting with old friends or meeting new ones you hope to have around for a long time.

The Nine Kittens of Christmas airs on Hallmark Channel at 8/7c.

‘Dancing With the Stars’ Finale: Did the Right Couple Take Home the Mirror Ball? (RECAP)
Bachelorette spoilers: Who did ‘The Bachelorette’ star Michelle Young pick as her winner and end up with? Who are Michelle’s Final 4 bachelors? (SPOILERS)
The Flash – Episode 8.05 – Armageddon, Part 5 – Press Release
TV Ratings for Saturday 27th November 2021 – Network Prelims Posted
The Sinner – Parts V, VI, & VII – Triple Review: Helpless
Follow us on Facebook
Follow us on Twitter