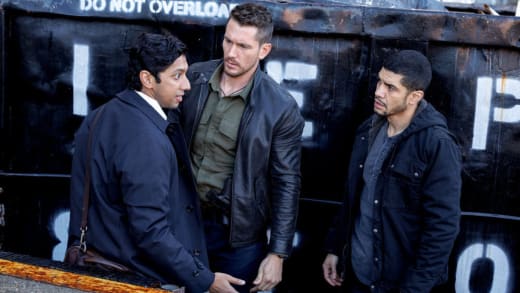 It took a standoff with a bunch of mobsters for Bell to realize what her team meant to her.

On Law & Order: Organized Crime Season 3 Episode 9, a meeting with Silas was meant to be the unit’s last mission.

But after a war with a bunch of mobsters, Bell couldn’t walk away from the task force she’d created. She turned down the promotion Lillian offered her, making a new enemy.

Bell’s decision will have consequences.

Bell: I’m not taking the job. My place is here with my team.
Lillian: I went out on a limb for you.
Bell: I’m aware, and I will return the favor.
Lillian: You’re making a huge mistake.
Bell: No. The mistake was saying ‘Yes’ in the first place. I’m trying to correct that.

That doesn’t mean it wasn’t the right decision. Bell realized she was only taking the job because she was thrown off by her divorce and didn’t want to stop working with the OC team.

She stood up for what she wanted despite the potential problems for her career. That’s heroic!

Lillian isn’t happy. What kind of trouble is she going to cause?

I thought Lillian would dissolve the team whether or not Bell took the promotion. I must have misunderstood something because it seems the unit is back in action.

This all happened at the tail end of an action-packed hour.

The setup for the confrontation with the mobsters left something to be desired. Silas wanted to meet at an abandoned building where there was no cell signal — what could have gone wrong?

Bell should have had more of the team in place from the get-go. It wasn’t a good idea to meet a dangerous mobster alone, especially since Bell already had doubts about whether they could trust Silas.

It was also strange that the phones couldn’t reach 911 because of the dead zone. In most cases, phones can connect to emergency services even if there isn’t enough signal to make regular calls.

Not this time, though. Stabler had to rely on throwing Reyes’ phone far away so that it would think there was an accident and call 911.

No one talked to a dispatcher, so it strained credulity that the cops knew what was happening when they showed up. According to Reyes, they heard gunshots when his phone connected, but his phone was far away from the action.

Besides, even if they heard shots, how did the cops know there were a bunch of mobsters inside?

The story wrapped up too quickly after that, with the mobsters rapidly surrendering. Why would a bunch of guys who had the guts to kidnap and threaten to murder a district attorney give up the second the cops showed up?

That sequence was a footnote to the main action: the fight between the OC team and the mobsters.

There was plenty of action, though some fight scenes went on for far too long. At first, it felt like the shootout would take up the entire hour.

Cops ran up and down stairwells, and someone started it again every time it seemed like the fight was over.

Still, the team was incredibly badass during these scenes. Jet had the same skills with guns that she does with computers, Bell kept fighting despite a leg injury, and Stabler crawled through a tiny space to get to Whelan.

Whelan had a legitimate question: how did those mobsters know to infiltrate Silas’ secret hideout?

Later, we found out that Silas’ attorney had tipped off the bad guys. But Whelan had every reason for his suspicion, although Silas was right that there’d be little point to him engineering such a thing.

I loved the look on Silas’ face when he thought Stabler would turn him over to the mobsters. This was seconds after Stabler had told Whelan they were doing no such thing, and he had a whispered conversation with Bell before making the call.

Silas should have realized it was a trick!

The hour did a great job of humanizing Silas. Although he’s a mob boss who has ordered horrible things, he’s also a human being who regrets putting his career (illegal as it may be) over his family and wants to change before it’s too late.

Stabler used Silas’ desire for a better legacy to his advantage. Silas was shocked to learn he was going to be a grandfather — he must be glad he failed in killing Pearl!

More importantly, Silas wants to stay alive for his grandson’s sake. Will he cooperate with Stabler later in the season?

The Silas family seems done for now. Robert and Teddy are both in jail, and that’s not likely to change any time soon.

ADA Sanders’ near-death experience at the hands of that mob won’t change his mind about that!

Still, mobsters have a habit of showing back up at inconvenient times on Organized Crime. And this one has stories to tell.

He’ll probably reappear toward the end of the season, if not before. Stabler is in touch with Pearl, and it’s anyone’s guess what she’ll do now.

Were you satisfied with the winter finale, Organized Crime fanatics? Hit the big, blue SHOW COMMENTS button and let us know.

The series returns on January 5, 2023. In the meantime, don’t forget you can watch Law & Order: Organized Crime online