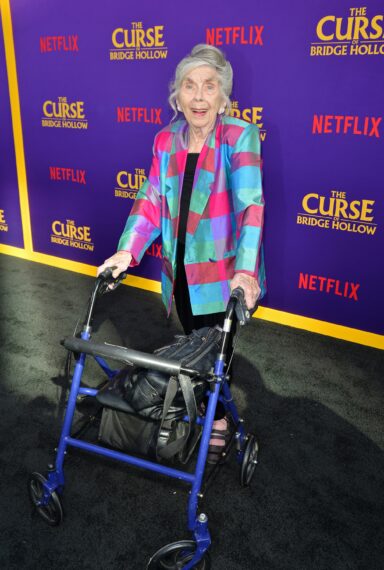 The Parks and Recreation community has lost one of its own as star Helen Slayton-Hughes has died. The actress who memorably portrayed Ethel Beavers was 92 years old.

Slayton-Hughes’ death was reported on December 8 by her family on her Facebook page in a message to fans. “To the friends and fans of our beloved Helen,” the statement began, addressing the page’s followers. “Helen passed away last night. Her pain has ended but her fierce spirit lives on. Thank you for the love and support of her and her work. Rest sweet one.” No cause of death was revealed at this time, but alongside the statement, a video memorializing Slayton-Hughes and her career was shared. As previously stated, Slayton-Hughes made an impact by portraying the rough and gruff court stenographer Ethel Beavers who worked on the fourth floor of Pawnee’s city hall in NBC‘s beloved comedy Parks and Rec.

Among Slayton-Hughes’ other television credits are roles on Single Parents, Fresh Off the Boat, The Middle, New Girl, Parenthood, Brooklyn Nine-Nine, Burning Love, Raising Hope, Desperate Housewives, True Blood, My Name Is Earl, Arrested Development, That’s So Raven, The West Wing, Malcolm in the Middle, NYPD Blue, and Nash Bridges among others.

She also had a role in the 2005 Oscar-nominated film Good Night, and Good Luck which featured an all-star cast including George Clooney, David Strathairn, Jeff Daniels, Patricia Clarkson, and Alex Borstein among others.

Most recently on television, Slayton-Hughes reunited with Parks and Rec‘s creator Mike Schur for an appearance on the Peacock comedy Rutherford Falls. She also featured in a number of recent Netflix movies including the Amy Poehler-directed flick Moxie as well as He’s All That and her last project The Curse of Bridge Hollow which starred Marlon Wayans, Priah Ferguson, and Kelly Rowland.