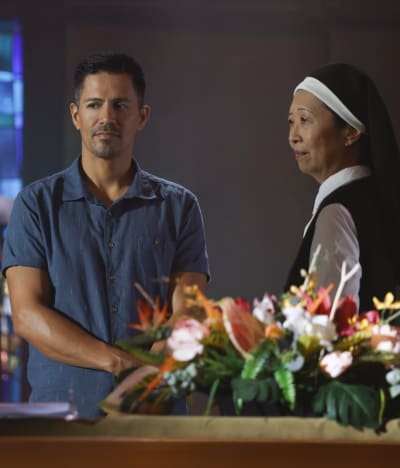 The words “a bit” must be emphasized.

It was no shock that Jin had created another get-rich-never scheme (remember his startup that cleaned money to kill germs earlier in the pandemic?).

Jin went a little more pedantic this time out and decided to start a dog-walking business. There’s something no one had thought of previously.

No wonder the gang at La Mariana largely hooted him off the stage. Only Higgins was kind enough to entrust him with the lads, Zeus and Apollo, for the afternoon while her and Magnum took on a new case.

Juliet indeed should have known better. After all, she was the one who probed Jin about his lack of a business plan.

Jin had no idea what he was doing. A dog walker has to know more than just how to walk dogs.

As an example from the episode, a dog walker has to know what to feed and not feed a dog. An energy bar that was questionable nutrition for a human definitely shouldn’t end up inside a dog. As Kumu pointed out, chocolate is toxic to dogs.

This poisoning meant that Jin immediately spent his nonexistent profits on a vet visit. In addition to waiting anxiously for word from the vet, he had to hang out with crazy pet people.

Oh, yeah, and the two gun-wielding robbers as well, who surprisingly intersected with Magnum and Higgins’ case.

Thomas and Juliet were doing God’s work. Or so it seemed, at first. A bag containing more than $100,000 fell into a church, like manna from heaven. But the blood on some of the bills made Sister Adina, their client, skeptical about keeping it.

Once they met Sierra, the teen parishioner battling a mysterious disease for whose treatment the funds were earmarked, they were determined not to find any reason for the nun to reject the money.

Jin’s criminal past turned out to be handy in this case, as he was able to identify the money launderer involved with the cash based on the type of bag inside which it was.

They had to work back from that money launderer to discover who had liberated the funds from the criminal who owned them.

Things went downhill quickly, especially after the pair found a body attached to the money. That would be a warning bell for Sister Adina, so they hemmed and hawed when reporting to her.

After all, Sierra certainly could use that money more than some island crime boss.

It was good that they brought Katsumoto into the loop early on as they would need him and HPD’s resources as the case developed.

Things took a turn when Leon, the church’s ex-con handyman who drove a pickup like the one that had forced the courier off the road, was found shot after helping to commit the robbery.

Leon was a good guy who got caught up in a bad situation. Hoping to help Stella, he agreed to rip off the crime boss. But once the courier was shot and killed, Leon wanted out, and he shot Izzy, one of his accomplices, before taking a bullet himself.

Naturally, out of all the vet clinics on Oahu, the other two robbers ended up at the same one as Jin (and Zeus and Apollo, of course. I was disappointed that Jin didn’t sic them on the robbers.)

At least, when Thomas and Juliet arrived at the clinic, they realized they were in over their heads and called Gordon, who rounded up a significant police presence.

As incompetent a dogwalker as he was, Jin proved to be a shifty inside man, using Magnum’s phone first to relay information and later set up the robber Red for the police.

Unfortunately, Red had gotten out the information about Leon to Tower, the ringleader, so it became a two-front operation. Magnum had to race to the church to protect Sister Adina.

It was hilarious how Thomas tagged Tower with a collection plate, then ran outside to draw him out, straight into the police.

Then Magnum made the bag of money disappear. Katsumoto didn’t make much of an effort to find it, did he? Nor did Sister Adina ask too many questions when it was regifted to the church.

The La Mariana talent show was one lost opportunity.

Kumu delivered a sterling rendition of “Tiny Bubbles.” But we didn’t get to see any of the hidden talents of the other characters.

Instead, Jin attempted to con a captive audience to invest in his business.

The whole Rick subplot turned out to be much ado about nothing.

While preparing for a significant event for his bar, Rick spent way too much time fretting about his upcoming video call with Suzy.

He was like a teen boy worrying because they hadn’t talked about the status of their relationship.

The big surprise was that she was pregnant, so their relationship deepened. But will that mean more Suzy or not? I vote for more.

To check out Jin’s past appearances, watch Magnum P.I. online.

Did Thomas and Juliet do the right thing?

Were you surprised by Suzy’s admission?