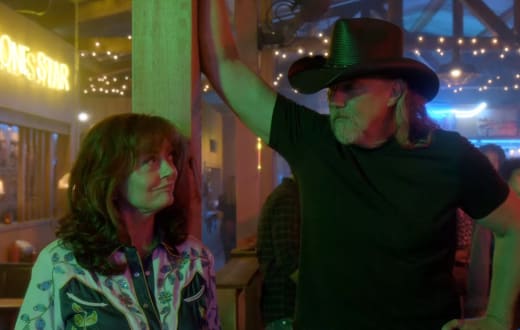 The Roman Family’s story will be incomplete on FOX.

According to Deadline, Monarch has been canceled after one season.

The news dropped just one day after the Monarch Season 1 finale, which was another shocking hour of the Country Music drama series.

Monarch launched in the fall, despite being initially set to premiere much earlier this year.

At the time of the delay, FOX noted that it wanted to give the show more time for promotion.

The series debuted with a football lerad-in back in early September with 4 million viewers and a 0.91 rating, with the premiere going on to reach much higher numbers with encores and delayed viewing factored in.

Unfortunately, the show failed to garner much traction in its regular Tuesdays at 9 p.m. time period, with the series overall averaging 1.9 million viewers and a 0.3 rating

The finale on Tuesday managed 1.6 million viewers and a 0.2 rating.

The series lost around half of its decent lead-in from The Resident. Shows that don’t hold on to the numbers of the earlier show on the night rarely survive.

Overall, Monarch was FOX’s least-watched and lowest-rated dramaso far this season and out of 11 scripted series overall, it ranked #8.

But even though the Roman name is synonymous with authenticity, the very foundation of their success is a lie.

And when their reign as country royalty is put in jeopardy, heir to the crown Nicolette “Nicky” Roman (Friel) will stop at nothing to protect her family’s legacy while ensuring her own quest for stardom, alongside her brother, Luke Roman (Sasse), and sister, Gigi Roman (Ditto).

What are your thoughts on the cancellation?

Money Court: No Season Three; CNBC Cancels Kevin O’Leary and Bethenny Frankel Series
‘Dexter: New Blood’ Axed as Plans for Young Dexter Prequel Begin
1923 – Renewed for a 2nd Season by Paramount+
The Daily SpoilerTV Community Open Discussion Thread – 30th January 2023
USD POLL : Do you like it when press releases include the cast list for the episode?
Follow us on Facebook
Follow us on Twitter