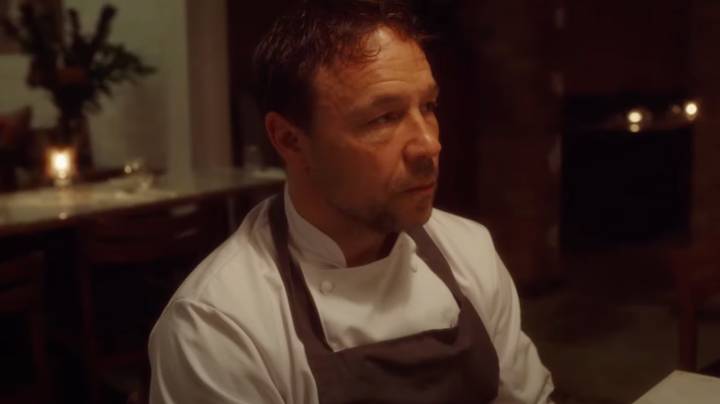 Boiling Point feels like a film made by working class people. It’s a testament to its dripping authenticity that can be seen everywhere – anyone who has worked in the service industry will find themselves represented to some degree or another in Philip Barantini’s story that focuses on the shift from hell for a head chef who balances multiple personal and professional crises at a popular restaurant in London. It’s got everything you’d expect: he’s forced to go to work over seeing his own son, staff that turn up late, new staff that can’t follow his instructions, celebrity chefs that he used to work with attending his restaurant unannounced and instagrammers who demand that they serve steak and chips when the menu does not have steak and chips. It sounds familiar – the constant stressful environment of the chaotic kitchen shifts, the rivalries between the front-of-house and back-of-house workers, threatening to spiral into out-of-control oblivion on one of the busiest nights of the calendar year. If you haven’t worked in a restaurant before or have any service experience – do watch Boiling Point to get a taste of what it’s like behind the scenes.

Barantini’s film casts actors from working class backgrounds like Stephen Graham and you believe that everyone in the kitchen has worked shifts before. Graham and Vinette Robinson are ace in their roles as Andy and Carly – and Alice May Feetham’s Beth is a highlight. You get to emphasise with the staff their personal struggles – in a rare calm before the storm, an aspiring actress chats about her audition after serving Table Seven – but Table Seven soon start to send items back, complaining that they haven’t been cooked right when the rules have been followed to the letter. To top it all off – the group are under a last-minute inspection; with the pressure piling up leading to a tragic – telegraphed, but no less effective, incendient that feels like the culmination of a chaotic night in hell.

Graham is the greatest actor currently working at the moment – and I feel like I’m saying that every year is his year. Released in the festival circuit in 2021 (out in the UK this week – playing at cinemas and on Curzon Home Cinema), the same year as Help with Jodie Comer, he has shown a knack for being cast in tasteful working-class films that highlight key issues – between that and Boiling Point, he’s arguably the best out of the recently nominated BAFTA awards actors. Prior work like The Virtues and his brief stint as John Corbett on Line of Duty; his upcoming turn on Peaky Blinders’ final bout, and stealing every scene he was in in Martin Scorsese’s The Irishman from under Al Pacino and Robert DeNiro have proved just how versatile he is an actor. He humanises Andy, making him feel real and relatable even when he makes decisions that lead to his restaurant from falling from a 5 star rating to a 3; you take his side over the inspector – he’s likeable yet tough, a well-rounded character as they come.

Boiling Point feels like a one-shot production on the surface (although questions will be asked about how true a one-shot production it is), but it feels a touch more authentic than say; 1917 (two shots, actually) or even Alfred Hitchcock’s Rope. The lack of need to feel self-indulgent really lends to the authenticity of Boiling Point – you buy every moment of it. There’s easy to cast villains – the passive-aggressive, self-important celebrity chef Alistair Sky, who constantly undermines Andy’s authority whilst trying to say that he’s there to help. Andy doesn’t need Alistair’s endorsement, he tells him – yet beneath the smiles, the façade is there – both men become more out of control throughout the night. It’s a testament to Jason Flemyng’s character that he never feels cartoonish and plays the right among of smugness just straight, and combine that with Table Seven and the Instagrammers – the film feels like a time bomb waiting to explode.

The chaos, rawness and unpolished touches of life in the kitchen restaurant feel so stressful that not since Uncut Gems has a movie left you on edge. Every character has something to say – every person feels real, even the ones that are painted as the villains. There’s enough dense details about pay and the lack thereof that replicate the tense, struggling factor that workers need every shift to survive, and the film replicates those that care about the job mixed in with those that are just there for the payslip and would rather be elsewhere. Every character in the kitchen gets a story – every character has something to say. It’s an us vs. them type movie in every sense – boasting its own kind of humour that anyone in a restaurant will be familiar with on the night from hell – and it’s a compeltely engrossing experience that you won’t be able to forget easily. Magnificent – in every sense.