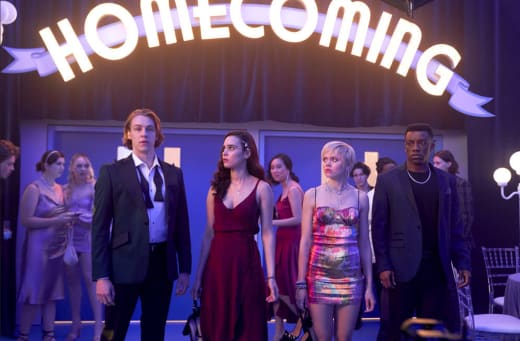 One of the best mystery series of 2021 is coming back for another season.

Peacock has officially renewed One of Us Is Lying for Season 2.

The news is unsurprising. The first season was buzzy, building a devoted following throughout its run.

Based on Karen M. McManus’s #1 New York Times best-selling novel, One of Us Lying is the story of what happens when five high schoolers walk into detention and only four make it out alive.

The first season wrapped with a killer cliffhanger.

Bronwyn, Nate, Cooper, and Addy found out that Addy’s boyfriend was behind Simon’s death.

Jake was left for dead, and we picked up two weeks later with the teens getting a text to say that someone knew what they did.

“We are thrilled that the compelling and binge-worthy first season of One of Us Is Lying resonated so strongly with our YA audience,” said Lisa Katz, president scripted content, NBCUniversal Television and Streaming.

“The fandom behind the series is incredibly passionate and we can’t wait to deliver more twists and turns that will leave viewers on the edge of their seats.”

“From the moment we saw the pilot Erica wrote, we knew this was a special show and we’re thrilled that Peacock felt the same,” said Beatrice Springborn, President, UCP.

“Returning to shoot in New Zealand with Erica as showrunner for season two is an exciting next chapter in the wild and fun story of the Bayview Four.”

“We are so happy with the reception of Season One, and are beyond thrilled that we get to continue our story in Season Two,” said season two showrunner and executive producer Erica Saleh.

“We can’t wait to bring more mystery to the halls of Bayview High!”

The renewal of ONE OF US IS LYING joins the additional second season renewals of Peacock Original series GIRLS5EVA, RUTHERFORD FALLS, and WE ARE LADY PARTS.

What are your thoughts on the renewal?

Are you ready for the next chapter?

‘9-1-1: Lone Star’ Sneak Peek: Why Lisa Edelstein’s Gwyn Tells T.K. to ‘Fight’ (VIDEO)
‘House of the Dragon’ Star Matt Smith Teases ‘Dark and Disturbed’ Character
‘The Fall of the House of Usher’ Netflix Series: What We Know So Far
‘Never Have I Ever’ Adds Anirudh Pisharody for Season 3 at Netflix
Exclusive: ‘Gold Rush’ Sees Parker Schnabel Get Big Red Ready For Mud Mountain
Follow us on Facebook
Follow us on Twitter